When he’s finished talking to TNT, he’ll enjoy (or endure) an afternoon in the gym, before allowing himself a rest ahead of another session in the evening.

Such is life when your profession is beating other men into submission.

He’s also the current Australian team coach on The Ultimate Fighter: The Smashes, a reality TV show where the best combatants from Down Under line up to destroy their British counterparts – The X Factor for hardmen, if you will.

Coaching was a different challenge for Greek-descent Sotiropoulos, but it’s one he relished.

After more than two decades of being in the ring, putting his immense boxing, kickboxing and MMA skills to the ultimate test, passing on his knowledge was a strange but welcome experience.

“I really enjoyed teaching, because in the past I’ve been so focused on fighting that I haven’t really done those sorts of things,” he says. 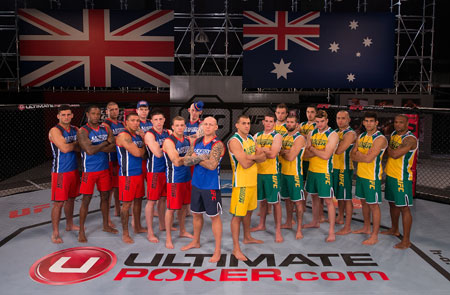 “It was a good opportunity for me to get out there and train with some good people. It was a great experience for me and I got a lot of good feedback, a lot of positive energy from it.”

The US-based Victorian says he was proud of the way his eight Aussies, including big wave surfer Richie Vaculik, conducted themselves on the show.

And he reckons the day that both nations are consistently challenging the American and Brazilian fighters, who’ve dominated the MMA rankings since 1993, isn’t far away.

“Australia and the UK are very similar in many ways, not just sport,” Sotiropoulos says. “But in terms of MMA, they like their striking. Both countries enjoy boxing and kickboxing and that’s what they’re best at.

“In the US, they’re better at wrestling. Everyone’s getting better at the ground stuff, with the growth of jiu-jitsu across the world, but in the US wrestling is the big differentiator.”

He’s loath to single out any one of the Australian fighters for mention, but he says all eight of the competitors under his instruction are “really talented fighters”. 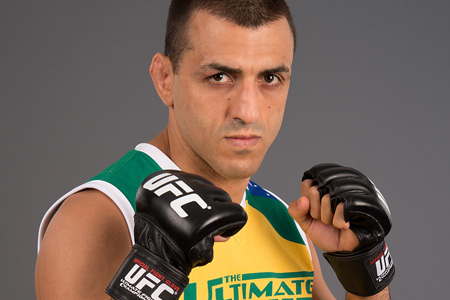 “What tends to happen on this show is that some guys really stand out, grab people’s attention,” he says. “They go off and improve and start getting winning streaks and make a name for themselves.”

Sotiropoulos should know, his big break came after making the semi-finals of the show’s 2007 series.

Using the skills and exposure gained from competing in the pressure-cooker TV environment, he launched a winning streak of seven professional fights and secured a coveted Ultimate Fighting Championship (UFC) contract.

It was a remarkable achievement, but one Sotiropoulos never doubted would happen. The self-confessed martial arts fanatic began watching fight movies, such as those from Bruce Lee, as a young boy.

When he came across MMA – and it’s pinnacle, the UFC – in his teens, he knew it was for him.

“I was determined to do it,” he says. “Fighting was in my DNA. I’ve always loved fighting, but when I came across UFC, I basically decided that’s what I wanted to do. I started training: jiu-jitsu, boxing, wrestling, I saw what I had to acquire to get into it and just trained myself.”

But make no mistake, we’re not talking to some street thug with a lust for violence. Despite having his eyes on the prize from an early age, Sotiropoulos realised that he may need a plan B, so he studied banking, finance and international trade.

However, while he enjoyed crunching numbers, the allure of crunching flesh and bones in the Octagon was too strong. His heart belonged to fighting. 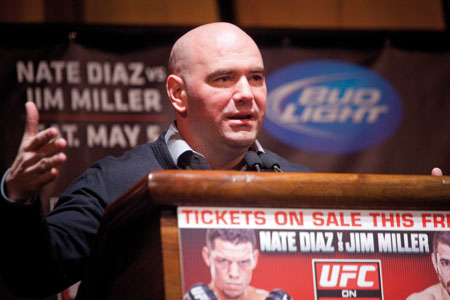 “It’s a way of life,” he says of his journey among the hardest-of-the-hard pro athletes. “I live to train.

“The dedication [needed] is unparalleled because there are so many disciplines you have to master and be proficient in, as well as maintaining a high level of conditioning.

“Those characteristics boil over into other parts of your life. You can’t help but be disciplined, focused and dedicated.”

However, not everyone is a fan of his profession. MMA has been banned in New York since 1997 and its existence has been strongly lobbied against by the US National Center for Domestic and Sexual Violence, whose executive director Deborah B Tucker claims the UFC “contributes to a culture of violence against women and lesbian, gay, bisexual and transgender people”.
Such statements are swiftly refuted by Sotiropoulos.

“People have been fighting for thousands of years, since the caveman. Humans love it,” he says. “You can’t deny it’s a brutal sport – it’s a combat sport, so there is that brutality involved ­– but it’s no more brutal than rugby or NFL or those kinds of contact sports. It’s just a sport, and that ferocity, that’s why we love sport.”

And the viewing public seems to agree. The past five years have seen an explosion in the popularity of UFC, especially with pay-per-view events, and the ratings figures now matching those of boxing.

“I have to quote [UFC president] Dana White: ‘Fighting is in our DNA,’ and he’s right,” says Sotiropoulos, who fights his rival Ultimate Fighter trainer Ross Pearson on December 14 on the Gold Coast, which will air as part of the show.

“UFC is a superior product,” he says.

”Sports like boxing are one-dimensional, whereas UFC is multi-dimensional. It makes for more exciting fights. Fights can be fought with more than one way to skin a cat and UFC proved that. That’s why the sport is so popular.” 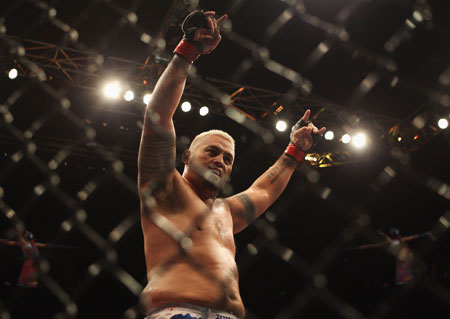 Auckland is on the UFC’s expansion list, with plans mooted for a trans-Tasman version of The Ultimate Fighter in the near future with Australia.

“There is a natural rivalry and a lot of camaraderie there,” UFC’s managing director for international development Marshall Zelaznik said.

“With an event in New Zealand around that, or even bringing one of our fight nights or pay-per-views there, we have little doubt it would be a big success.”

New Zealand is now among the top 10 markets for UFC, with pay-per-view sales rising 20 to 30 per cent each year in recent times.

The Kiwis have two representatives among the UFC’s 350-strong stable of fighters now.

The Ultimate Fighter: The Smashes airs in the UK every Wednesday at midnight on ESPN