Your new play Rough Justice is about a journalist who finds himself charged with murder. Did its attitudes towards the law provoke debate?

My character’s a big media figure, he presents news and current affairs programmes, like Panorama, but suddenly he is in the dock where the judge is the boss, and he is nothing. It is interesting how the law doesn’t make a distinction between legal and fair, it’s just ‘the law’ that matters. The fact it can be grossly unfair cannot be considered.

Very much so. The hope is you go away arguing about it – about the verdict, the motives, the law and whether it treated the defendant properly.

There are sometimes the most appalling injustices and the reasons are, frequently, lying coppers. But even if people know that,
the only thing that the court has to go on is the evidence in front of them. They can’t go: “I think whoever’s not telling the truth.”

You’ve been outspoken about local councils before. Have you considered running in a political capacity?

No, it would drive me nuts, because you can’t get anything done – committees always fail and that’s why governments fail. Common sense is put on the back bench in favour of political experience. The only thing governments want is to stay in power. It’s clear what’s happening at the moment isn’t working, but the only thing you can do to get the country going again is to radically slash income tax. We can’t hope the country to move financially when no one is allowed to have any money. It is so obvious!

Does government need to change?

I don’t think any of them are any good or have any imagination. And they are all too young, you shouldn’t allowed in cabinet until you have run a bun shop for a year, and successfully so, too.

How’s acting changed over you career?

There’s a lot of talk about the rise of the digital age, and how theatre is ‘outdated’. Despite this, theatre’s popularity has never changed. Since people have been on earth, we’ve been making up stories for others. There’s something about listening to live storytelling that fascinates.

Are you happiest on stage?

That’s where the fun is because you are working all the time – you go in in the evening, you are on the stage for two hours and then you leave. If you are making a movie you’re up at 6am, you get home at 8pm, and you’ve spent a lot of that time waiting around, reading a book.

Was that the case on your most recent film, The Dark Knight Rises?

When I am at work, I like to be working. It’s been great fun, but as I get older, I get more irritated by the waste of my time, especially if I’m sitting in a motor home. And TV’s the same.

TV’s critical fortunes have changed in the last decade. Has this pleased you?

Certainly in the US, where the quality of writing is so great, it has. But the British TV industry has a way to go. It needs courage! It has been in the doldrums for the last 15 years.

Even if we’d had the money, I doubt very much that you would have had The West Wing or The Sopranos, or Six Feet Under here.

We get Doctor Who instead…

Do you still love theatre’s ‘anything might happen’ nature?

That’s the best thing about it. Being out there in front of however many people every night makes anything that goes wrong a phenomenal drama. 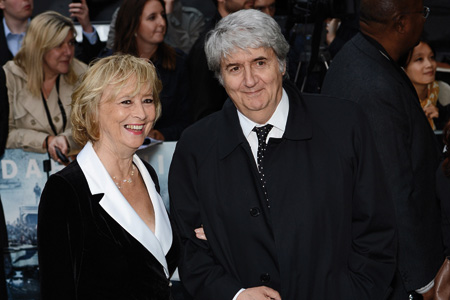 I went back in a play called Art a few years ago. I had done it before and [actor] Judd Hirsch had to return to New York before the end of his stint.

They called me and said: “Do you remember it?” It had been a year, but I thought: “I know this.”  I did two runs, on a Tuesday and Thursday, then opened the following Monday and dried up.

I couldn’t remember a thing, so looked to the guy beside me. He’d been doing it for five months, but he looked back blankly. I wandered off stage to find the prompt, but she was reading a magazine, so I tried to find where we were.

Even though the audience were watching an empty stage they still thought there was a reason for it. My wife, though, was bleeding from the ears.

Do you still get first night nerves then?

Oh god yes, it doesn’t get any less terrifying!

Interview – Terry Alderton: The comedian on Eddie Izzard’s career advice and why communicating through shoes is awesome