For the songwriter who waxed lyrical about the 21st century, singing about watching the news on a computer screen and buying weed out of a vending machine, Sydney-born Sam Sparro has done somewhat of a 180 and drawn from the past while putting together his latest, sophomore album, Return To Paradise. The album, out now, has enabled the singer-songwriter to move in a more personal direction, while drawing on influences that range from Beyoncé to Fleetwood Mac.

“I went to New York to work on someone else’s album and I rediscovered record collecting,” Sparro says. “I started listening to the funk, soul and disco records of the late Seventies and early Eighties. I started off recording stuff that was a lot more dancey. And then it turned into a more classically rock-inspired album. But in the end, listening to disco was what really shaped the record.

“It made it more human, the arrangements are more mature. Overall it’s a good progression.”

His pop-infused dance music made Sparro’s name, some critics rushing to anoint the 29-year-old as the ‘voice of his generation’.

But Sparro’s new music channels an earlier era; the paradise he refers to in his album is a metaphor for “peace and happiness” but, as Sparro explains, “it’s also a reference to the nightclub in New York City, Paradise Garage, that was around in the Seventies.”

The fresh-faced singer was never able to experience first-hand the gay nightclub first hosted in a parking lot in about 1976 but Sparro doesn’t let a little thing like time get in the way of inspiration – this album has him dipping into the past like a cherry-picking time-traveller.

A few years ago, Sparro, featured on the front cover of Attitude magazine, a gay British publication – they called him a “Gay Superhero”. Having never hidden his sexuality, Sparro finds it hard to understand the Australian government’s inherent fear and lack of action regarding equal rights.

“It’s great what Obama has done,” he says of the US president’s support for marriage equality. “But I don’t think Julia [Gillard] will come out and express her opinion. And I’m not sure that she even has one that I agree with. She seems too conservative.”

Sparrow’s own opinion is straightforward: “My view is that it’s a no-brainer. Of course everyone should have the same, equal rights as everyone else.” 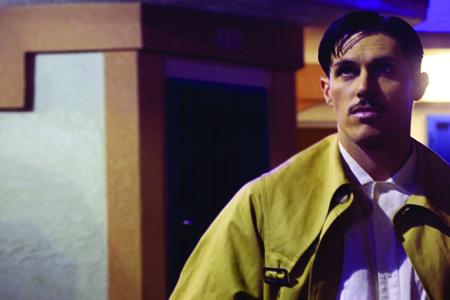 Conservative views are something Sparro knows only too well. He grew up in a Baptist family – his father a gospel minister and his mother an organ player at church. So he’s like the male Katy Perry?

“Oh God no, her parents were really strict, my weren’t that bad. Apparently she wasn’t even allowed to listen to any music, which was definitely not true in my house,” he says.

Sparro, ever the individual, has spent plenty of time bathing in the bright lights of LA but, as the song goes, still calls Australia home.

“I feel like an Aussie, my passport is Australian,” he says. “I miss the beaches a lot, like Camp Cove, Watson’s Bay, north Bondi. And when I’m in Sydney I go to Jimmy Liks, a great restaurant in Potts Point.

“But I’m not patriotic to just one country,” he adds, in typical Sparro fashion. “I really don’t believe in countries.”

In reality, LA has been home for much of his adult life and was the inspiration for the track, The Shallow End, about, you guessed it, the shallowness of the City of Angels. In the century that has us spending more than ever, Sparro prefers to recycle. Whether that be music, clothes or ideas.

“I grew up listening to cassettes, CDs and then an iPod,” he says. “But I recently became a nerdy record-collector. It’s a tactile experience. I like the smell of them, even the dust.”

Although The Observer recently described Sparro’s sound as “like Marvin Gaye hangin’ with LCD Soundsytem”, it’s not just musically that Sparro draws from a bygone era; his unique creative style also flows into his music videos, over which the singer has creative control.

“If you look at my new film clips, the theme is kind of The Great Gatsby meets Blade Runner,” he says. “There’s an old-world feel. I think that fashion and film have been progressing along similar lines.”

His latest film clip, for the single I Wish I Never Met You, shows off these cinematic stylings. The clip follows a gang leader known as ‘The Shark’ as he conducts his illegal businesses, including distributing booze. The clip features classic dance moves from Sparro that are inserted into the gangster storyline. It feels like Michael Jackson has entered the Prohibition Era.

This theme flows naturally into Sparro’s own fashion choices. These days, you’re more likely to see Sparro looking dapper in a suit – no more fluro sunglasses and brightly coloured T-shirts, once his trademark.

“I used to be a bit more wild and just put on like every single colour I owned. And I think that was the style back then too,” he says. 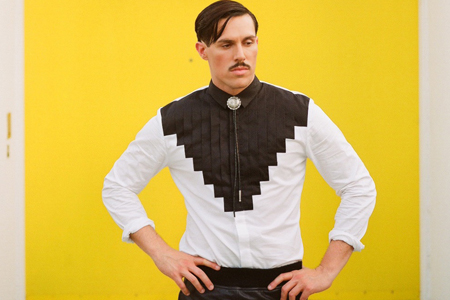 “Putting on a really nicely pressed suit can really lift your mood and give you an instant makeover. I’m a chameleon when it comes to fashion – it’s constantly changing and evolving. I’m really into menswear of the Thirties and how it manifested itself in the late-Eighties again.”

Proving fashion isn’t just a statement, but more of a lifestyle, Sparro graced the front row at the recent Men’s Fashion Week, passionately blogging about it daily.

“The collections I saw at Fashion Week in Paris were amazing. A lot of that classic thirties look is coming back,” he says.

These days, the shades no longer his signature item, Sparro insists he’s become fond of wearing lingerie as outerwear, perhaps channeling the superhero alter-ego that Attitude identified early on.

“Jean Paul Gautier and Yves Saint Laurent in the early Nineties did a lot of bodices and corsets for men,” he says.  “Someone has to bring it back. You can’t just all walk around in jeans and T-shirts all the time.”

As Return to Paradise hits the shelves, Sparro will embark on a European tour that has him headling the Lovebox festival in London, where he will be performing with Grace Jones and Chic, who Sparro has cited as one of his major influences.

It highlights how far Sparro has come since writing 21st Century Life, complaining the future isn’t all it’s cracked up to be.

“When I grew up, I believed the year 2000 would bring about some kind of utopian future,” he says. “Technology moves so fast but now living in America, I see economic setbacks and that makes me think it will slow down and we will have to consume less.

And I think this is a good thing.”

Sam Sparro’s album, Return To Paradise, is out now. samsparro.com