The memory of Pretty Vacant – with its stress on the fourth syllable ’cunt’ – being played at an Olympic Games opening ceremony was a cheeky reminder of the indelible influence his band left on British culture.

The Sex Pistols, once considered the scourge of UK society, may now be a celebrated part of the nation’s music history, but in 2012 they still dropped the C-bomb in the presence of the Queen.

“It was a big deal,“ Jones says, proud of his involvement. “Danny Boyle was the one who really pressed for the use of that.

That’s never going to happen again, not on that scale.“ Elizabeth II has long been a part of the Pistols’ history.

Their 1977 single God Save The Queen quickly became an anthem for the disaffected youth of the day, horrifying the rest of society to the point where the song was banned by the BBC; when it reached number one in the charts, the top spot was left blank. Soon after its release, and two days ahead of the Queen’s Silver Jubilee flotilla, a Sex Pistols concert aboard a boat (appropriately named the Queen Elizabeth) on the Thames was forcibly stopped by police.

It’s fitting, then, that in 2012, the year of the Queen’s Diamond Jubilee, the Sex Pistols are still shaking things up. And to celebrate 35 years since the release of their only album, Never Mind The Bollocks …

Here’s The Sex Pistols, the band has remastered the record, reissuing it with a box set that includes demos from the infamous Spunk bootleg album and their controversial Belsen Was A Gas single.

“I think it’s a lot better,“ Jones says of the improved Never Mind The Bollocks. “Whenever we’ve remastered in the past, it’s always been off a CD, as we lost the original master tapes.

Miraculously, they were found in a studio vault we didn’t know existed. Things are a bit brighter this time and you hear the other bits and bobs you don’t usually hear on the record. I’m well happy with it.“ 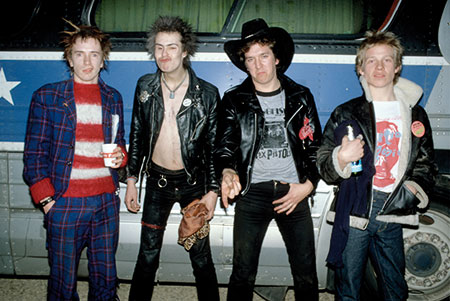 During the past three-and-a-half decades, the album – Jones’s brutish blast of power chords and ripping solos and singer John Lydon’s sneering, taunting vocals, all propelled by Paul Cook’s thundering drums – has inspired musicians from Slash and Kurt Cobain to Green Day and The Prodigy.

Despite its age, it still sounds relevant today: a call to arms to question authority and a refusal to be ignored or downtrodden by society.

Jones puts that down to four lads, who had crawled out of the poorer streets of west London, communicating their frustration at being part of a class overlooked by the rest of Britain.

In 2012, in an increasingly media-driven, image- conscious world, NTB’s honesty and authenticity means listeners are still affected by its no-bullshit vibrations.

“It was one of those things that was done with no agenda to sell records,“ Jones remembers.

“We weren’t looking for the single and all that; it was just a bunch of songs we had written and taken on the road a little bit beforehand.“

It may have been all about the music for the guitarist, but when he appeared on the Today show in 1976, things changed forever.

Jones, when goaded by host BIll Grundy, called him “dirty bastard“, a “dirty fucker“ and a “fucking rotter“. Britain went mental. The Pistols had truly arrived.

“Before that, we were building momentum in the music world, but as soon as we did the Grundy show, it wasn’t about music – it became who’s going to swear here, who’s going to throw up now. It became a bit of a joke, but you couldn’t buy that publicity.

It was a masterstroke, really.“ The Pistols’ notoriety followed them everywhere, heightening when they replaced bassist Glen Matlock with the self-destructive Sid Vicious.

As well as adulation, the band endured vindictive abuse that graduated into physical attacks from monarchists, but Jones says all that overshadowed the fact the band were far more than just noise merchants.

“The biggest misconception is that we couldn’t play. We were a tight band and we could play with the best of them – The Who, The Beatles or the Rolling Stones,“ he says. “People think we just went in there and made a racket.

The truth is, when you get other bands trying to emulate the Pistols, they never do it right. It’s about the four guys who did the record, you can’t imitate it. Whenever we go on the road and do reunions, we’re tight. We’re a tight rock group.“

Talking of reunions, will there be one to support the remastered album? Jones doesn’t rule it out, although there has been tension between him and Matlock in recent years,

Jones accusing his bandmate of being a “wanker“ and a “middle-class mummy’s boy“ who takes too much credit for the songwriting on Never Mind The Bollocks.

“I’m sure when someone needs a new motor or something, we’ll get out on the road,“ he laughs. “I call John on his birthday.

Matlock, I don’t speak to. Cookie, I talk to every few months; he’s my oldest friend, known him since I was 10. We do our thing.“

Jones and co rose to prominence challenging a society living under a monarchy and he still has no desire to be part of it. Like many other members of rock royalty, he now calls LA home. 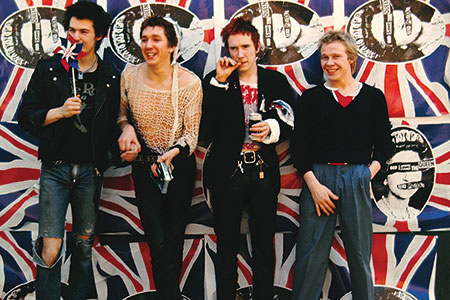 True to his punk roots, though, he’s never put down the guitar, jamming with everyone from the Chili Peppers to Johnny Depp over the years.

He also fronts a radio show on LA’s KROQ, will soon appear on TV show Californication and regularly turns out for Hollywood United, the city’s celebrity football team.

It’s not a bad life for a lad from Hammersmith who never felt wanted, but refused to give in. Still, it wouldn’t have been possible without Never Mind The Bollocks …

“I like the fact we only did one record and we were only around for three years. The fact that we had such an impact is an achievement in itself,“ he says.

“I was young, 21 years old, didn’t really have clue what was going on. It was a time when no one had jobs and the country was a mess, pretty much like it is now. It’s like its gone full circle.“

He hopes the reissue of his masterpiece will inspire a new Steve Jones to rise above their lot and make their voice heard, to challenge the government and lead an uprising that questions and pressures those in power.

“There needs to be a new band. There ain’t been a movement for a few years,“ he says.

“I’m tired of people just using us 35 years later as the ones who got up and said something about what was happening.

“There’s always certain bands and records that will appeal to people growing up and the Pistols are one of those bands that you’ve got to check out. That spirit, that ’punk’ ethos – hopefully, that’s the way people are thinking.“

Interview with The Barmy Army’s Bill ‘The trumpet’ Cooper