Hey Girl, how long have you been DJing?
I started learning in 2010 and started playing gigs in about 2011. But I’ve been playing piano since I was four, so I’ve always been interested in music. One of my friends had decks so I got into it that way. Because of my musical background I started to learn how to produce as well and began coming up with my own things.

What’s the scene like in Melbourne?
It’s great, I have residency’s at La Di Da, Sorry Grandma, and Majic, and do few random gigs here and there.

Do you have a day job?
Yeah DJing doesn’t pay all the bills, as much as I’d like it to! I’m a waitress, so if anyone wants to come and get a coffee off Girl Audio, they can come to The Botanical in Melbourne.

What did your folks say when you told them you wanted to be a DJ?
They took a gulp of air and said, “Okay”. My mum is a writer so she just smiled and nodded but she doesn’t really know how it works, and what we have to go through as DJs. But she’s there to support me 100%. It’s just a completely other world to them.

Do you have a genre of music?
I play electoro-house and little bit of complextro as well. So, you can imagine my mum doesn’t really get that. She’ll stand there and say, “I can’t hear anything, I can just hear drums.” 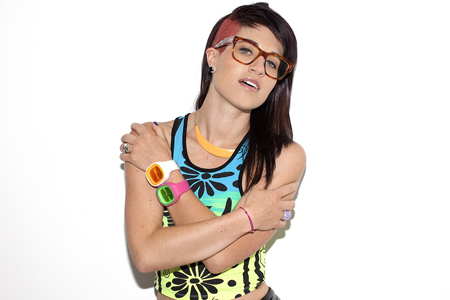 Do you think your gender helps you get jobs?
I think being a girl sometimes helps you get your foot in the door because people see you as a dollar sign, but then if you want to grow, you have to prove yourself a little bit harder. I think boys especially get jealous of girls because they get their foot in the door for, basically, having tits. That kind of pisses them off, so if you want to earn their respect you have to prove yourself as a DJ – and as a person.

What would playing in Ibiza mean to you?
It would be absolutely amazing. It’s funny because just before the competition I was actually in Europe. I went to Ibiza and I was in heaven. I just wanted to play there so badly. So, seeing as though that is one of the prizes, it’s just made me more and more excited about it. Ibiza is a mecca.

Do you use records, CDs or a laptop?
I use CDs. I noticed that in Europe a lot of DJs just use their laptops. I think in Australia there is a stigma that if you’re a real DJ you need to use vinyl or at least CDs but in Europe I don’t think it matters. For me I’m happy to stick to CDs and USBs,.

Dream collaboration?
I’m really loving Porter Robinson’s stuff at the moment, he’s doing a similar thing to what I love doing and crosses with it with Skrillex dub-step sounds. 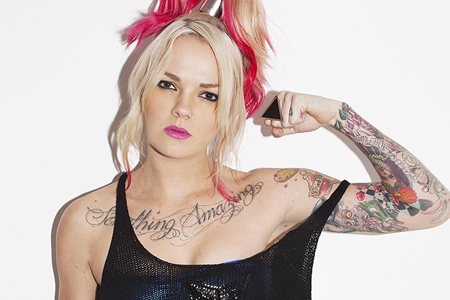 How long have you been DJing?
I stated working in nightclubs about five years ago and just fell in love with music from there. All my friends DJ’d at this club I worked at and I just thought: I want to do that. I told a friend who lives in Sydney that I wanted to start  DJing and I was going down there for a holiday so he secretly booked me a gig – even though I’d never DJ’d before. So I went down there and he showed me a few things and then I had to play a gig two days later. Which was terrifying, but I sort of enjoy being thrown into the deep end. You learn more.

What’s your genre of music?
I have quite a few but it’s mostly house, techno, then more the electro side of things, it just depends on what venue I am playing and what people want to hear. It’s better to be adaptable.

What is the scene like in Brisbane?
The scene up there is good. I’ve got two residency’s at the moment, one at Sky Room and one at Family, but I play heaps of other gigs. The scene up there is picking up and I think it used to be viewed as a small town but these days we’re getting more international acts up there and there’s more of an interest in the electronic scene.

Is the goal to do it full time?
Definitely. I am starting to produce now as well, so I should have some tracks coming out soon and I want to get into production so I can take it further. I definitely want to stay in this industry for as long as I can.

What do you think of the others in the competition?
It’s just really good to meet other girls that are into the same thing that you are, and actually be able to talk to them about DJing. I think I talk my friends ears off a little bit about music and they get a bit sick of it sometimes. Now I have good connections around Australia and can go and hang out with them when they play gigs.

Do you think you should you be competing against guys?
No, I think the competition is a really good way for female DJs to step it up and get viewed for our talent, instead of just being girls. People are wising up to the fact that girls actually are, and can be, really good DJs and producers.

What do you think of last years winner, Minx?
Yeah she’s a really lovely person, we spent some time with her in Sydney. I’m looking forward to picking her brains about everything in the future.

Your three desert island albums?
I reckon probably Ghettos and Gardens by Justin Martin. Iggy Azalea’s mixtape Ignorant Art. And Dr Dre 2001. Just to mix it up a bit.

The top 10 will play the sets of their lives at the final event held at Sydney’s ivy on Wednesday September 5. (For tix see: dashtickets.com.au) To win a double pass to the event, email alex@tntdownunder.com and tell us who you think should win.  shecandj.com