“I’m from New Zealand but Australia’s a big part of where I am today, so I fight for both,” he says.

Only a mug would question his allegiance – the 31-year-old has a formidable professional record and his name literally means “The Hiding”, a fair representation of the floggings he tends to give opponents with his attacking style.

Te Huna takes on tough Canadian Ryan Jimmo in a light-heavyweight bout at Wembley Arena when the UFC comes to the UK for the fifth time on February 16.

It’s fair to call this the prime contender for fight of the night, with both men renowned for their aversion to taking a backward step. “He’s a hard guy to fight, from what I’ve seen,” says Te Huna in the first of many understatements.

“I watched the video of his first UFC fight but it doesn’t last all that long, not even 30 seconds.” 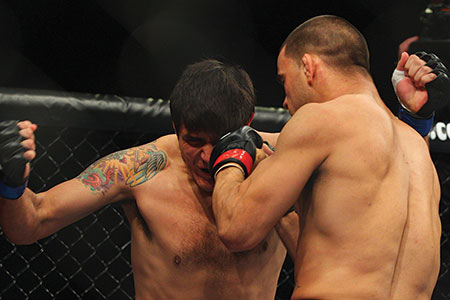 Jimmo’s UFC debut officially lasted seven seconds, including time for a touch of the gloves with UFC veteran Anthony Perosh before he delivered a thunderous right hand to his opponent’s left jaw and ended the fight in the equal fastest time in UFC history.

He was no green-horn having fought 16 times with only one loss – in his first ever fight in 2007 – in Canada’s Maximum Fighting Championship.

“His previous fights went to decisions, and he didn’t really press the fight, just sucked people into going the same pace as him,” Te Huna muses.

“But he can push a fight forward. I’ve got a similar sort of style in wanting to push the fight, so I’ll be able to come at him and see if I can get him hurt early and get the win. I take risks but hopefully get the reward. And the crowd seems to love it.”

The all-or-nothing approach likely stems from Te Huna’s upbringing, he says, without elaborating. He doesn’t claim to be fancy, just works hard and leaves nothing in The Octagon.

“I had a pretty simple childhood,” he says. 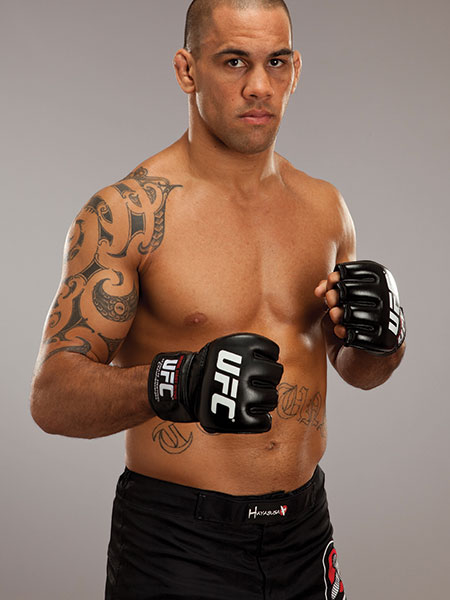 “But it changed when I got into martial arts, watching a lot of Van Damme and Eighties martial arts movies. My uncle was into it and my father was a bit of a brawler, so I had it in my blood.”

It was inevitable Te Huna would find himself in a ring of some description, but he tried plenty before he found his home in the one with eight sides, a fence and a pot of gold.

“I started boxing as a teenager, and I wasn’t too good at that,” he says.

“I think I just got bored of it. Then I came across a kick-boxing gym and gave that a go, and didn’t do too well.

“Then I tried jujitsu, and didn’t do too well. I kept trying these things, but then there was a MMA tournament in Queensland, so I gave that a go and fell in love with it.”

His story had a long way to go. 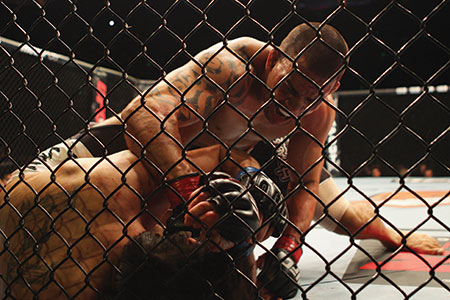 The Aussie-Kiwi didn’t take the sport seriously until he came in contact with Mark Hunt, who became a superstar of K-1 in Japan and also fights in the UFC now.

“I really got the boost I needed from meeting Mark,” Te Huna says. “He’s from a similar background, is Polynesian, and went from living in the gym to top of the world. I just thought if he could do it, what’s stopping me?”

Te Huna got the attention of the UFC – mixed martial arts’ pinnacle – via Australia’s Cage Fighting Championship.“There was a CFC Grand Prix happening and it was rumoured that UFC was coming to Australia the next year,” he says.

“I thought if I get a few wins up and win the title it’d give me a good chance to fight on the UFC undercard.”

Te Huna was working as a bricklayer at the time, but borrowed money from family and friends to be able to train full time for two months in the lead-up to the tournament.

“That was a bit of motivation,” he says with dry sarcasm. “When I made the final I had to stop work and do it again.”

His opponent a couple of months later in the CFC final was an Australian UFC veteran with a familiar name, Perosh, the same bloke Jimmo decked on debut.It took Te Huna a more considered two minutes and 21 seconds to inflict “the hiding”. 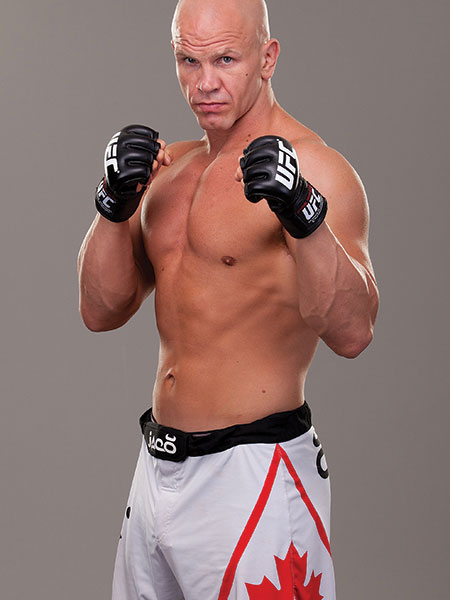 But he was making sure of it.“I had to be sensible and win the fight so I could pay my friends and family back,” he laughs.

That win led to Te Huna achieving his dream, the major contract, and as he’d hoped a slot on UFC 110 in Sydney in February 2010 against Igor Pokrajac, who he knocked out with 90 seconds to go in the third round.

In the four fights since, he’s had just one loss, by submission to six-foot-five-inch Swedish grappler Alexander Gustafsson, but a victory against Jimmo would take him to four in a row.

Wins and entertainment factor make a UFC fighter gold dust for those who run the mammoth brand –  the fastest growing sport in the world and a pay per view TV juggernaut – and Te Huna fits the bill on both.

“I’m chasing wins all the time but I know I’ve got a style that people like to watch,” he says.

“I don’t take a backward step and I take risks all the time and try to push the fight.”All he needs now is the recognition in his home country.

“In the States I get recognised as a fighter, but everyone in Australia and New Zealand think I must be a league or union player … I’d be bad at that too.” 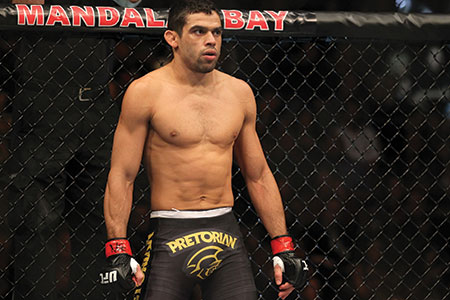 Brazilian bantamweight Renan Barão is tipping history to repeat itself when he takes on Michael McDonald in the headline UFC bout in London on February 16.

Barão has said he thinks McDonald, whose nickname is ‘Mayday’, is a similar opponent to Brad Pickett, the man he beat on his last visit to the UK.

“They have the same game plan, they both have powerful hands, but Michael is a little taller with a bigger reach,” he told ESPN.

“That’s the difference.”Barão is defending his UFC interim bantamweight belt at Wembley Arena and hopes to produce something on McDonald that’s similarly as exciting as the rear naked choke he inflicted on Pickett .

In McDonald’s last fight he spectacularly knocked out Miguel Torres, who had lost just once in 16 pro fights.