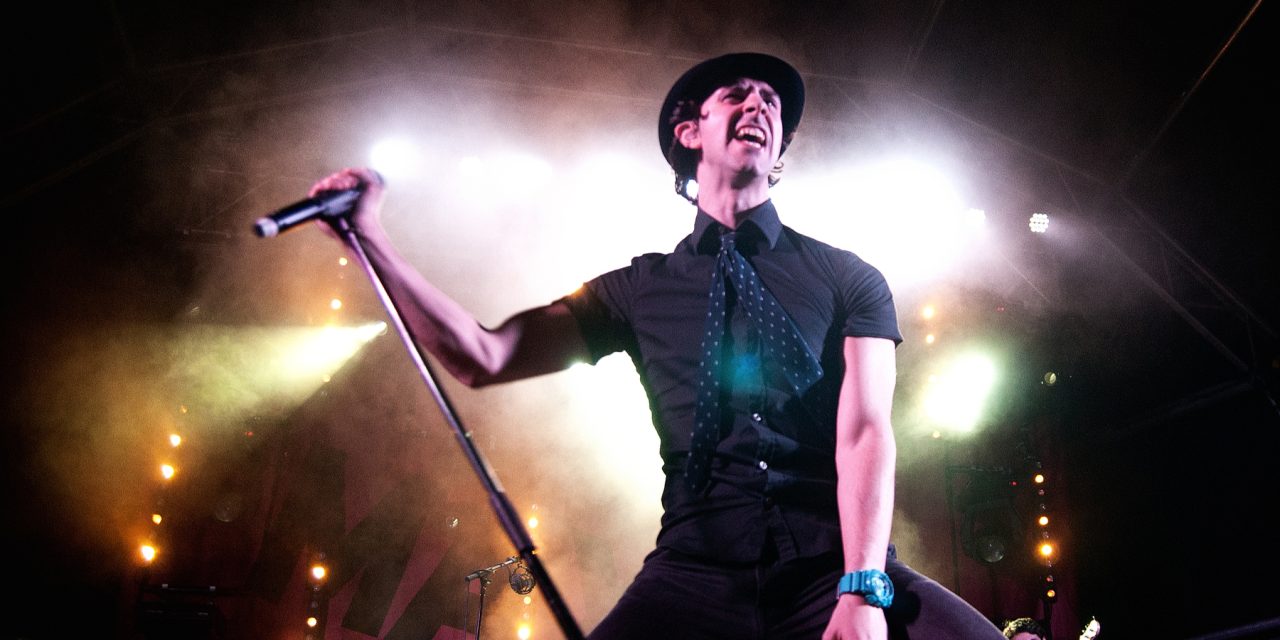 When Maximo Park’s second record Our Earthly Pleasures debuted in the UK at number two, singer Paul Smith was taken by surprise. “It’s kind of a wake up call. A lot of people really like us,” he said. The album has had mixed reviews in the press, but Smith isn’t worried. “I think it’s quite nice to divide opinion rather than be some band that no-one really takes any notice of. Some people think [the record] is experimental and others tame in comparison to the first.” It might not grab you immediately but it’s a creeper. “My favourite albums are those that make you come back to them, but you’re not quite sure why and then eventually it becomes an album you love. WeÃ•d rather make an album to chew on rather than one that offers instant gratification and satisfaction, only to quickly lose it.” Our Earthly Pleasures is still the Maximo Park sound, it’s just layered and developed to sound warmer and fuller. To allow the lighter songs like “Books From Boxes” to leap out of the stereo the heavier parts are quite hard. But as Smith says, “The songs are still about everyday things you see walking down the street, feelings that you have about other people, the songs that are there to connect with people, really.”

According to Wikipedia you were discovered whilst singing “Superstition”. That’s true I suppose. I was in a nightclub with Tom’s girlfriend at the time and people sing along to the music and you don’t really think about it but sure enough I was overheard. Tom’s girlfriend said to him, “Paul can sing in tune and you’re looking for a singer and he plays guitar in a band and jumps around.” No one really knew I could sing and I wasn’t sure myself and a few months down the track we’re making records for a living. I knew roughly the man that is Tom English. He asked me to go for a drink one time and I had no idea what he was going to ask and sure enough he plied me with drink and said, “Fancy a shot at singing?” And though it’s a bit embarrassing to sing in front of four people you haven’t really met before and do something you don’t know if you’re good at, I thought I’d give it a go. The worst that can happen is some mild embarrassment. I just wanted to do it just to see what it turns out like.

You mentioned your leaping around. Have you ever measured how high your high kicks are? Not yet, I’m sure it will happen though, maybe a diagram will appear in some magazine. I think as soon as the Olympics come around next year there’s gunna be in contention for the high jump and I’m going to be right there, I’m gunna be a contender.

You came to Australia in 2005. Did you get to see much of the country? Not as much as I’d like. We didn’t even get over to Perth. We stuck to the east coast. I remember having a look around Melbourne and Sydney and I was blown away because you see stuff on the TV like Sydney Harbour but nothing really prepares you for the sight of it on a sunny day as it unfolds before your eyes. And Melbourne seems like quite an artistic city and reminds me of parts of Britain, so I felt quite at home in some respects. We were fed very well which was the most important thing. I’m ready to come back and have a bit more of a look around. That’s one of the main parts of our existence. We obviously get to play to crowds, but you see places and things close up that not many people get to see.

With more success do you get more time off to look around cities? It’s becoming harder and harder. The more people are interested in our music the more people I have to talk to. I think a few may find calls being ignored in favour of us experiencing a new city to the full, but there is a commitment that you’ve got to fulfil.

So when was your last holiday and where did you go? Holidays in this band are very hard to come by because if you’re not playing somewhere you’re travelling somewhere and then you’re making a record. The last place I went was Paris in January. Paris is a very beautiful place, with the architecture and history and the romance, you can’t help but be swept away by it.

You’re out again in August. Will you make it to Perth? We will. We’ll catch a plane across this mass country of yours. I mean it’s odd not to see a whole country. In the UK we go around and see a lot of the country and come up with your own map in your head. So hopefully we’ll get to see all the places for ourselves. Read another interview with Maximo Park’s Paul Smith here