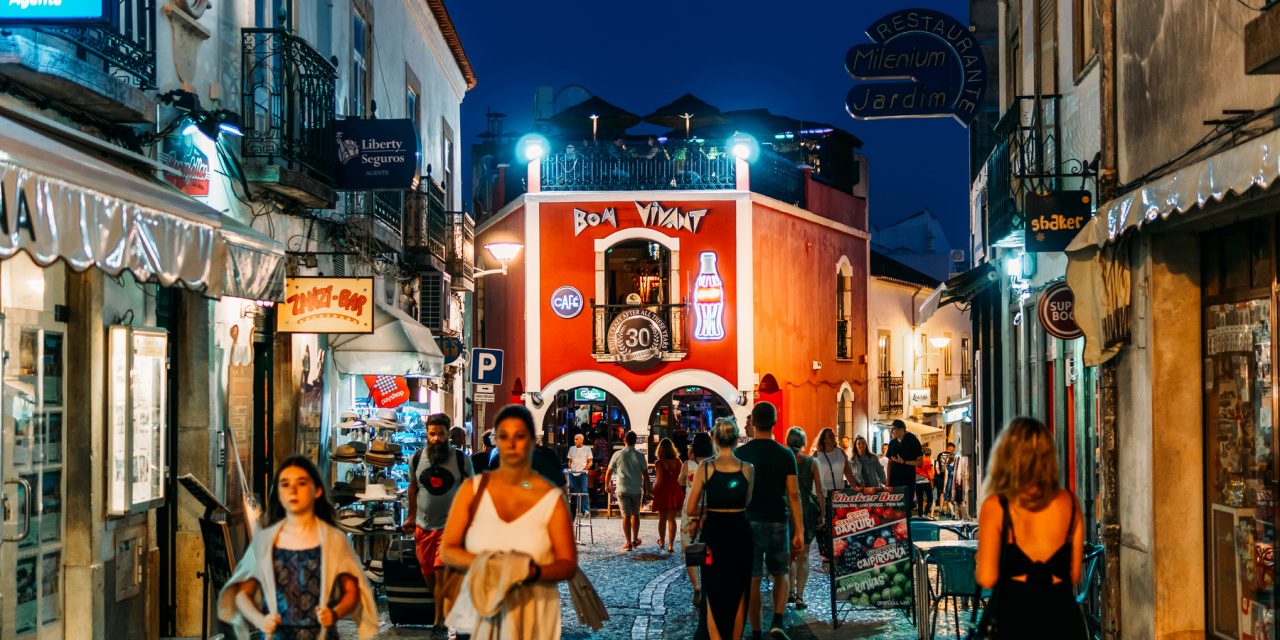 Maybe it’s out of gratitude, maybe it’s just because he’s a hell of a dog, but when I stumble out of Three Monkeys – probably Lagos’ most popular beer and Yagerbomb pit – with no idea where the hell I’m going, Ratty is there waiting.
He gives a little yelp, trots off down the alleyway, and I follow obediently. At the next intersection, I swear I need to veer left down to the main square, but Ratty insists we go straight. And so the process goes for another five minutes until, sure enough, Ratty leads me triumphantly back to The Surf Experience house, safe and sound.

It’s not the most amazing story, right? But as I nurse a hangover and tell the tale over a mug of tea at the breakfast table next morning, it turns out Ratty did the same for most of the other 12 guests.

“Yep, he’s a cool dog,” says Dave. “Why do you think he’s on our logo, smoking a reefer and wearing a pair of aviators?”

Three Monkeys is Lagos’ most popular bar but there are a host of others, most staying open till 4am in summer, including Eddie’s Bar, the Redeye, Rosko’s, Stones and the classy Stevie Ray’s Blues Jazz Bar. In fact, it’s amazing there are so many bars and that they make any money at all, considering the amount of free tequila and Jagermeister shots they dish out.

Despite repeatedly vowing to have shot-free nights, the promises are broken every time when a line of evil little glasses filled with various poisons appears on the bar.

Aside from the ballistic summer nightlife, Lagos is an absolute goldmine for great beaches where you can burn off the pasty-white layers of London flesh for a new bronze pelt. Meia Praia is the long stretch of sand to the east where you can always find a spot to roll out the towel. The town’s south beaches – Camilo, Batata and Dona Ano – are small and secluded with lovely calm waters and interesting grottos to explore.

Many of Lagos’ attractions are based around the ocean, with shark-fishing safaris, dolphin watching, parasailing and boat trips.

Lagos is also gastronomic heaven. Pork is the national dish but the proximity to the ocean means seafood is always fresh and relatively cheap.

When the late nights and beating sun become too much, head past orange trees bulging ripe fruit to the cobblestoned main square, where in the afternoon old Portuguese gents gather for a chinwag.

When you’ve soaked up the scene, don’t be surprised if you look down and see Ratty, his tail wagging. “It’s time to head back,” he seems to be saying, “‘cos the crew are gearing up for another night on the town – and you’re coming too.” Lead the way!

Town walls
Once a fort, the town walls of Lagos date back to the 17th century and are classified as a national monument.

Slave market
Lagos was slavery central in the 15th century and thousands were sold at the slave market, now an art gallery.

Sao Sebastiao Church
One of many churches in Lagos, this one has a chapel made entirely out of bones.

Fish market
Get down to the wharves opposite the marina soon after sunrise to watch the fishing fleet come in and buyers haggle over price. Bring your cameras.

Rua de Barroca
The old boundary between the town and the sea, this street is a blend of Arabic and Portuguese architecture and design.

Trevor Paddenburg travelled to Portugal with easyJet and stayed with The Surf Experience.