As the projected black and white newsreel footage which frames each scene informs us, the worst of the bombing is over and children evacuated at the start of the Second World War are finally coming home. For Olivia Brown, happy in her elegant Westminster love nest, it’s a cause of great excitement but also of trepidation – how will her son Michael (whom she hasn’t seen for four years and is now just a month shy of 18) react when he learns that she’s living in luxurious, contented sin with wealthy industrialist and Tory cabinet minister Sir John Fletcher?

Her fears are well founded – it’s not just his widowed mother’s domestic arrangements which upset Michael. With his idealistic socialist convictions, he despises everything he thinks Sir John stands for.

Rattigan pits the arrogant young man (who’s far from the adult he thinks he is) against Anthony Head’s mature, worldly (and devoted) Sir John – and the result, though often extremely funny, also reveals the deep emotions underlying the behaviour of all three. 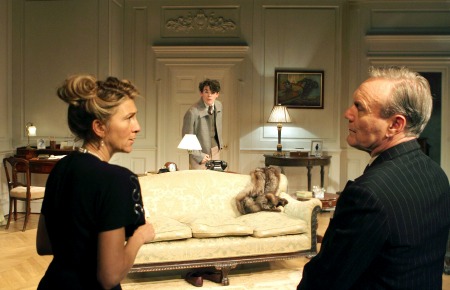 Eve Best is superb as conflicted forty-something Olivia – revelling in her new found role as a society hostess, very much in love with Sir John, yet torn by her maternal bonds to Edward Bluemel’s moody Michael, even when he’s behaving like a latter-day Hamlet. And Helen George adds a touch of pure blonde, pink-clad froth as Sir John’s not yet ex-wife.

The limited run is already almost completely sold out, but this gem of a production surely deserves to follow Travesties, the Menier’s previous hit, into the West End.

England happy to be home after tough tours