Some 20 trampers had passed in the opposite direction, turning back like demoralised soldiers in retreat from the frontline, barely visible through the swirling mist and bent against a vicious wind. A wind that had almost blown my girlfriend from the plateau into a deep crater.

We were part way along an ascent through a landscape of live volcanoes, hissing sulphurous smoke and volcanic pools that is New Zealand’s oldest national park, Tongariro. No wonder Peter Jackson filmed much of Mordor here for orc-slaying epic The Lord Of The Rings. 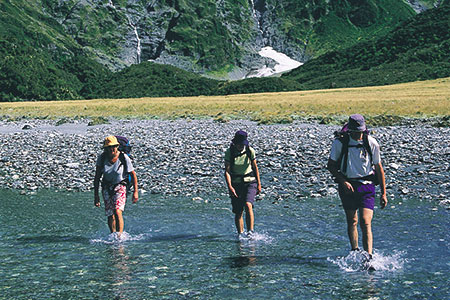 The 50km Tongariro Northern Circuit is one of New Zealand’s nine Great Walks and a section of it doubles as the 17km Tongariro Crossing – the country’s most popular day walk. It passes through a bleak and unique, post-apocalyptic, lavic landscape, designed by the national park’s three active volcanoes – the highest, Mt Ruapehu (2,797m) last lethally ejaculated in 1996. Irrespective of any films, the setting seems entirely suited to orcs, goblins and slimy poisonous types. It is both ominous and alluring. The area is also highly sacred to Maori and is World Heritage-listed on both cultural and natural grounds. 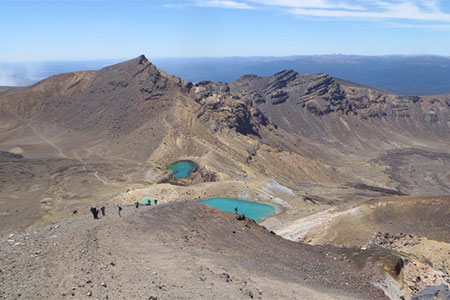 Mordor didn’t want us around. My girlfriend and younger sister were looking at me for leadership. Turning back seemed sensible, but where did sensible ever get anyone? The challenge just made me more determined – it was far too exciting to back away from. Though my increasingly rosy nose patently disagreed, I decided to push on. And since I couldn’t hear their voices above the wind, I decided the rest of the fellowship probably agreed.

We continued along the freshly-emptied and barely-visible path, through the dense, rolling mist. Our trail finally turned away from the harsh wind and descended through loose lavic scree. Suddenly, in front of us, we spotted a small, brilliantly emerald, ethereal lake (something told me it wasn’t safe drinking water). We stopped for photos and a quick snack, noticing more similar sized lakes in the near distance. Nearby rocks looked like they were generating their own mist, but closer inspection revealed they were oozing volcanic fumes – the whole place is alive. Strange smells, shapes and sights are everywhere. It truly felt like another planet.

And then, in that quintessential New Zealand way, the mist suddenly cleared, the sun bounced out and it was like a new day. Below, to our right, a vast panorama of scorched, barren landscapes unfolded. We continued down a valley, zig-zagging through a field of giant, twisted lava sculptures to Oturere Hut. 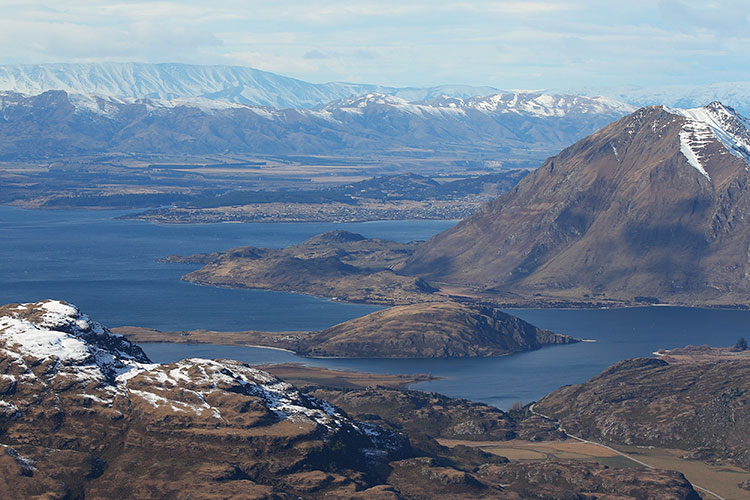 The earlier weather conspired to postpone plans to climb the park’s second highest volcano, 2,287m Mt Ngauruhoe. Perfectly conical, it was eerily familiar to LOTR geeks (like, ahem, me) as the place where Frodo lost a coveted piece of jewellery, along with his finger.

Somewhere among the sun bathing, the mandatory noodles, watching the sun set behind the volcano and late-night card games, I decided to get up at 5am and tackle Mount Doom afresh, ignoring the thin plume of fumes, languidly snaking outof the mountain’s mouth like cigarette smoke.

The sun was yet to announce itself as I left the hut to retrace yesterday’s footsteps, but at least the skies were clear. A knackering hour later, I was at the base of Mount Doom – the live volcano lacked menace without Jackson’s special effects, but was still a daunting prospect. And there’s no path. It’s a steep cone of loose rock – every two steps forwards takes me sliding back one step. Slow progress takes me past three other climbers. It was one of the most exhausting hours of my life. 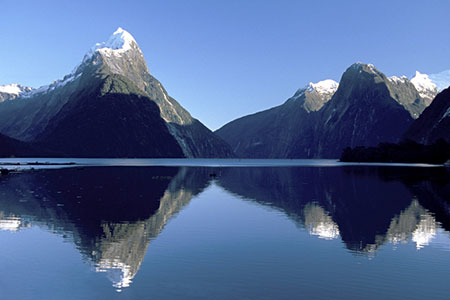 As I stood triumphantly at the top of the fearsome Mount Doom, the sun was beating down on smouldering, ice-encrusted rocks – many, a deep red – with vast vistas reaching out in every direction: the impressive expanse of Lake Taupo, the multi-peaked, snow-capped Mt Ruapahu and even Mt Taranaki in the far west. And there’s one unfathomable, sinisterly silent crater. I snap away with the camera and feel like I’ve conquered Mordor – without any magic jewellery or an annoying fat friend.

Two hours later we leave the hut and head for Waihohonu Hut. Across flat, barren plains and through wooded slopes, it’s a stroll in the park compared to yesterday’s battle with the elements.

The next day we continue the path between the towering Mt Ruapahu and Mt Ngauruhoe volcanoes, through scrub land, past crystal-clear springs and large lakes – not a patch on the Crossing, but a decent stroll nonetheless – to where our bus collects us at Whakapapa Village and ferries us back to the town of National Park.

Battle-weary, we badly need baths and beer, yet we carry the satisfied glow of a testing voyage completed. And though there’s a small cut on my nose, unlike some who journeyed across Mordor, I still have the standard finger count.