Wild Dunedin: Where the student nightlife is just as wild, but nowhere near as stunning, as the rare sea animals

Dunedin is a city of 100,000 people, and 20,000 of those are students. Know what that means? It means a place that should be small, quiet and unassuming, devoted to its rare wildlife and the tourists who like to look at it, is instead stuffed with bars, cheap food, galleries and everything else that distracts people under 25 from their studies. In short, it’s wild.

Dunedin has a great nightlife for the financially challenged. Everything’s open late, a lot of it’s cheap and what isn’t cheap is worth it anyways. I visited a selection of bars in my few days there. The best student pubs are Gardies (697 Castle St), the Captain Cook (354 Great King St), and the Albert Arms (cnr George and London Sts). Gardies has $5 pints and $3 double spirits all the time.

When you wake up at the wrong hostel the morning after a mission around these bars, take the Speight’s brewery tour so you can abuse those who’ve made you so ill. There’s all the obligatory history stuff, and pour-your-own fun at the end. They say 58,000 people go annually, and it costs $13.50 for backpackers. Wheee.

There’s also a Cadbury factory tour, but the Oompa Loompas aren’t included in the price, so skip it. Another place worth visiting is Countdown (309 Cumberland St). This is a 24-hour supermarket with a 24-hour-licence. VB costs half what it does in Melbourne, where it’s from. In fact, beer is amazingly cheap all round in this city. 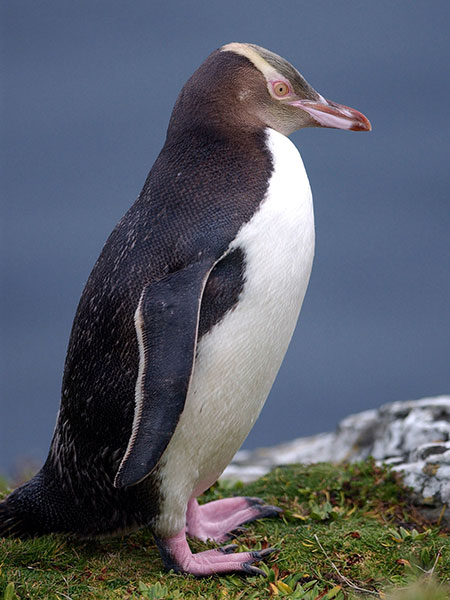 Alright, I should probably ‘fess up at this stage: I’m a bird watcher. That’s right, an amateur ornithologist. I love birds of all feathers. The Otago Peninsula is home to the yellow-eyed penguin (above) and Hooker’s sea lion, both the rarest in the world. It also boasts the only mainland Albatross colony in the world, with plenty of tours available to take to these critters.

When I walked into the Visitor’s Centre (at 48, the Octagon) I was overwhelmed by the amount of tours on offer. If they turned that terrifying array of pamphlets, leaflets and booklets back into a bunch of trees, they’d have a forest so huge they could hide at least another 10 rare species in there. I couldn’t go on any of the tours anyway. I had no money.

So I saw wildlife for free instead. I hired a two-seater moped for $30/day from Rent a Car (all you need is a regular driver’s license), and drove down along the Otago Peninsula to the albatross colony at Taiaroa Head. There I was delighted to see these majestic birds with wings spanning 10 feet across, soar up over the cliffs. 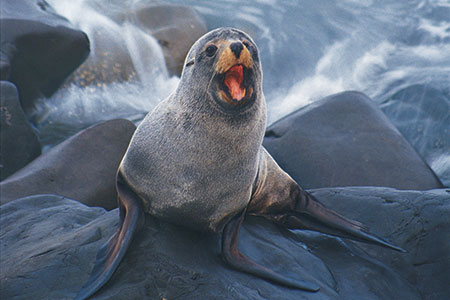 Next stop was Allan’s Beach, home to some rather hungover- looking sea lions. I was only lucky enough to spot the one, but nevertheless, it was a sea lion (or maybe a dolphin in a tatty fur coat, who can tell?). Sandfly Bay has penguins, sea lions and sand dunes.

You can sled down the sand dunes, see sea lions and watch for the very rare yellow-eyed penguins when they come ashore morning and night. If you don’t have transport and can’t con someone into driving you everywhere, catch a bus from Princes St (cheaper than from the Octagon) to St Kilda, a nearby beachside suburb. According to Leggie, owner of Toast bar, you can occasionally spot sea lions at Lawyer’s Head, north of St Kilda Beach. Heading to St Kilda is a good way to do a mini-tour of Dunedin anyway.

The walk along the beach to St Clair is beautiful, though there’s not much in St Clair except an expensive restaurant on the Esplanade – no beachside fish ‘n’ chip shop (stupid). Cargill’s Castle (more a mansion with aspirations) is right nearby and unlike Lanarch Castle out on the Peninsula, it’s abandoned and free to enter. It’s also illegal and difficult to get into. The view and sense of history are more interesting than the gently rotting shell itself. I braved the fences, insane horse and near death from the cliffs to trespass, and it was pretty cool, but not worth ripping my pants over.

From St Clair catch the Number 8 bus to Baldwin St, Dunedin’s Guinness World Record street. Baldwin Street is a normal suburban street that’s real steep and has a lot of tourists panting up it. I counted 30 in the half hour I was there. To be honest, that’s about it. Woo, it’s steep. 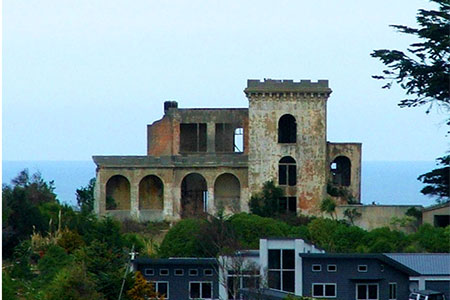 Coming back, the Botanic Gardens are worth a look and from there you can wander home via the university and museum. If it’s late, you can always play Spot the Shit-faced Student. I was hungry and went to one of the Khmer satay houses. For $3.50 you get a satay chicken burger; a coffee costs more at some Dunedin cafes. I ate there, and sitting under the restaurant’s harsh light, I learned something.

Those big, black-backed gulls which soar so majestically on the air currents around Cargill’s Castle (above) also like to eat garbage, and fight the little seagulls for it. So, as you can see from this shoddily cobbled-together piece from a hack who drank her paycheck before she got it and had to go on the cheap, Dunedin is fun, cool and thoroughly recommended to young and old alike.

The dumb tourist’s guide to wildlife

Seals and Sea Lions: Don’t look them in the eye. If one chases after you, don’t run, stand your ground and back away slowly. Don’t get between them and the sea; they see this as threatening. If a seal continues to move closer, bend down and pick up the brown substance below. Worried there won’t be any there? When that seal comes at you… believe me, there will be.

Penguins: Don’t approach them. Yellow-eyed penguins are very shy. View them from a distance.

Other things to do

Walking: There are plenty of walks to do. The walk to Signal Hill, starting from North Rd, is cool. For more information, visit: Otago Tramping and Mountaineering Club.

Taieri Gorge Railway: Considered one of the best in the world, you can catch a bus to Queenstown from the terminus.

Galleries: Being a student town, there are plenty of galleries. Temple Gallery, in a converted synagogue, and Blue Oyster are just a couple.

Ghost Tour: Historical and vaguely creepy, but gives you a great look at what’s behind all those old Scottish buildings.

Big Trip: Sloping off by train