Amber bar have made an allegiance with Heineken this year to provide you with some memorable match days. They’re going to be showing all the games, so book early to nab one of their comfy loungers. They’ll also have a special deal on throughout the tournament; you can scoff a meaty burger and and wash it down with a pint of beer for £10.

Zebrano Soho
If you’re after a cheap and cheerful time with fun-time party vibes, Zebrano in Soho is the venue for you. They’re running a special £9.50 Euro ticket, which includes entry, a juicy burger with one topping and a glass of wine or beer. The atmosphere is set to be electric. 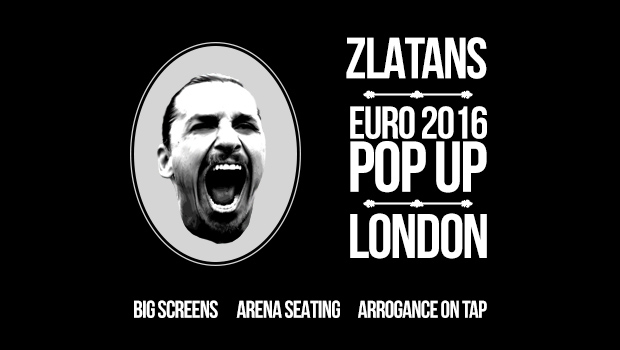 Zlatans is a tongue-in-cheek Euro 2016 pop up set in the heart of Clapham. It promises arena seating, terrace standing and a mighty stadium atmosphere. Hands down, it’s gonna be the destination of choie to watch Euro 2016 in London; grab your tickets while you can.

Zoo Bar
Zoo Bar have four large projectors and a plethora of plasma screens to ensure nobody misses out on any Euro madness. Being a sports bar favourite, they’ve set up a great match day deal, where you can get a cheesy pizza and four bottles of beer for £15. Stuck for some cash? This is your spot. Bavarian Beerhouse have two London locations showing all the games – Old Street and Tower Hill. There’s a £5 booking fee for all German matches, but don’t worry, you get a free pint of beer when you arrive, which is basically your money back. The earlier you book, the closer you’ll sit to the scren.

Steam and Rye
Steam and Rye is known as a glam spot for city slickers but they’re keen to cater for Euro 2016 fans this summer. You can book a booth with your own personal screen, and if you have a big group you can rent out one of their private rooms, all of which are fully equipped with massive screens. They’re also doing some awesome deals come match days, like a bucket of 10 beers for £40. Forget keeping your feet on solid ground this summer, hop aboard Bar & Co for £15 and get full coverage of the Euros alongside a drink and BBQ item from the grill. It’s an awesome deal that also offers you great views of London’s iconic buildings.

The Grand’s Summer of Sport
There’s nothing worse than leering over floating heads to catch a glimpse of the game. You’ll not have to worry about that if you decide to pay The Grand a visit this summer. They’re home to the largest HD screen in the UK; it’s 24 foot wide. They also have two HD TVs and six 50-inch plasmas. Tube it to Magic Roundabout this summer for an all-out Euro experience. They won the best outdoor venue in Shoreditch in the DesignMyNight awards; and with plenty of TVs to catch all the action, you’d be daft to go anywhere else on a hot day. Entry is free and they’re going to have DJs spinning tunes before and after the matches.

Euro 2016 at Barsmith
Barsmith are offering some bloody brilliant packages for the Euro games this year. They range in price, from £160 to £900; the most impressive and expensive includes a fully stocked private fridge, hoards of cheesy pizza and your own private screen. There needs to be a minimum of 30 people for this option though, a great excuse to get your nearest and dearest together.