England crashed out of the Euro 2012 on penalties – again – after a goalless quarter-final against Italy in Kiev.Roy Hodgson worked wonders in no time with the side, but the Three Lions were left heartbroken again. Ashley Young hit the bar and Italian keeper Gianluigi Buffon saved from Ashley Cole, leaving Italy to win the shootout 4-2. England captain Steven Gerrard said: “We leave with our heads held high – but it doesn’t help with the heartbreak.”As consolation, awesome Spain made the Italians cry when they flogged them 4-0 in the final. Spain became the first team to take three major titles in a row, having won Euro 2008 and the 2010 World Cup.

It was all arse over tit in Australasia’s two major footy codes after both the league and AFL titles went to teams from the wrong state. The Sydney Swans downed Melbourne’s Hawthorn by 10 points in a see-sawing upset thriller. They finished 14.7 (91) to 11.15 (81) in front of 99,683 fans.The Melbourne Storm beat Canterbury Bankstown Bulldogs 14-4 in the final, and they got to keep this one as they weren’t cheating on the salary cap. Halfback Cooper Cronk was the Clive Churchill Medalist for man of the match.Was it redemption after they had two premierships stripped from them? “It’s not,” skipper and 2012 world player of the year Cameron Smith said. Essendon Bomber Jobe Watson was the Brownlow medalist. 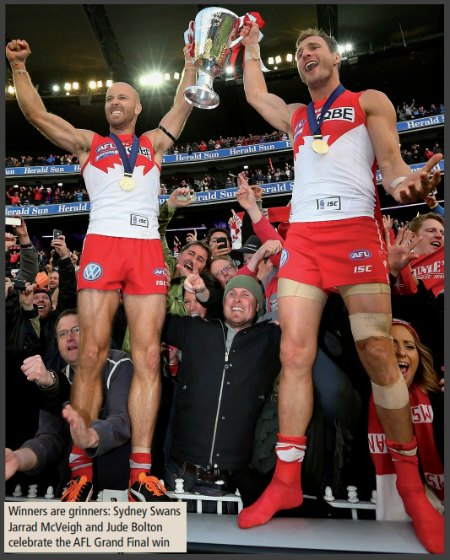 LANCE NOT FORGIVEN OR FORGOTTEN
Cycling

We learned some things are too good to be true when the UCI backed the US Anti Doping Agency and said Lance Armstrong had been involved in the “most sophisticated doping programme that sport has ever seen”. “Lance Armstrong has no place in cycling and deserves to be forgotten,” they said in their damning, and long, report.His reaction? He removed “7-time Tour de France winner” from his Twitter account when he was stripped of the titles and posted a pic of himself lounging in a room with his seven yellow jerseys on the wall. “I’ve been better, but I’ve also been worse,” he was quoted saying at an event for his Livestrong charity, from which he’s now stood down.

A RARE MARE AND THE SUPER STALLION
Horse Racing

Two of the greatest horses ever stole the show on the racetrack this year. Aussie mare Black Caviar reached 22 wins from the same starts with her first overseas run in the Jubilee Stakes at Royal Ascot in June.Then came big boy Frankel, who was retired after 13 wins from 13 starts after winning his last start at Royal Ascot on a heavy track in October’s Champion Stakes.Trainer Sir Henry Cecil, who’s said the horse has helped his battle against stomach cancer, said: “He’s the best I’ve ever had, the best I’ve ever seen.”Jockey Tom Queally said it best after riding the winner in front of 35,000 fans.“I always think the best time to leave a party is when you least want to,” he said.

SLIM PICKING DOWN UNDER IF IT’S NOT WET
Olympics

Without water, Kiwis and Aussies had  bugger all to celebrate at London 2012.Hurdler Sally Pearson and cyclist Anna Meares were the only on-land golds for Oz. One in the pool, three in sailing and one in canoeing made a dismal total of seven gold with 16 silvers. NZ shot-putter Valerie Adams got gold when her Belarusian defeater was disqualified. Three rowing, one sailing and one canoeing gave them a tally of five.

Team GB took five days to get gold number one, but then it was a rush of 29 golds from 65 medals. Highlights included Chris Hoy taking over as GB’s greatest Olympian, Katherine Grainger taking gold after silver every Games since 2000 and six golds on Aug 4 alone, including Jessica Ennis, and long jumper Greg Rutherford celebrating his win as Mo Farah triumphed in the 10,000m. 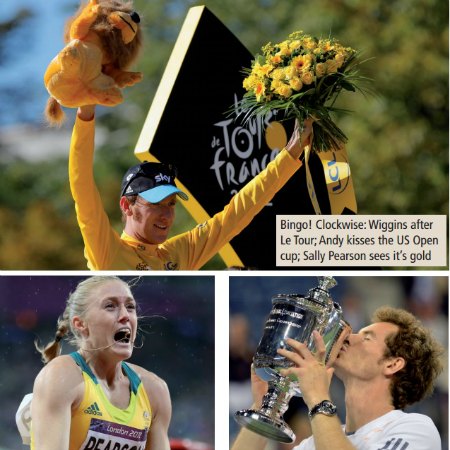 Emotional roller coaster wouldn’t do Andy Murray’s year justice. Through tears he said “I’m getting closer” after losing the Wimbledon final to Roger Federer. And how right he was.He broke his Grand Slam duck in the US Open against world number one Novak Djokovic. It was his fifth Slam final.Then he backed it up and won Olympic gold, rolling Federer 6-2 6-1 6-4 where he’d been beaten four weeks prior.

Not only did we find out how freakishly Bradley Wiggins can ride, he also has personality to burn – and not because of his BBC award.On the Tour de France winners podium he joked to thousands he was about to “draw the raffle numbers”. The Team Sky leader held onto the yellow jersey from stage seven. Then he went and won gold in the Olympic road race a week later. Freak!

Was it the greatest comeback of all time? We can’t think of one better.Europe was down 10-4 to a rampant US and were gone for all money, but then the surge began until the final match didn’t even matter. Europe won. Englishman Ian Poulter, among a field of major winners, went through undefeated.“The Ryder Cup is what memories and dreams are made of,” he said. “We just knew we had a chance and you know what, this is history right here.”

With the 2011 World Cup theirs – finally – it was time to dominate for the Kiwis, who went on a 20-match unbeaten run until beaten by England.They won a 10th Bledisloe Cup in a row over Australia, who celebrated a draw with them like a win. Dan Carter was IRB Player of the Year while coach Steve Hansen won coach of the year.

Australian captain Michael Clarke came of age in 2012, becoming the first player to score four double centuries in a calendar year – and against top opposition in South Africa and India. England’s Alastair Cook must get plaudits for his outstanding three centuries against India, who his side beat on home turf for the first time in 28 years. Australia’s women beat England in the T20 World Cup final in Sri Lanka.

AT LEAST ONE OF THE ‘BEST GAMES EVER’
Olympics

No one declared it “the best ever” like in Sydney, but it was bloody brilliant.London knows how to put on a show! Impossible to forget performances included Usain Bolt’s double-double, David Rudisha’s 800m and US women’s 4x100m breaking a record, which had stood since 1985, and Michael Phelps ending his career with an 18th gold in a total of 22 medals.But the overall winner was London.

QUOTES OF THE YEAR
“Miracles do happen in Manchester. Only this time it’s on this side of the road”
Manchester City manager Roberto Manciniafter his side won the Premier League over rivals United on goal difference

“It’s what I came here to do. I’m now a legend. I’m the greatest athlete to live”Jamaica’s Usain Bolt after he became the first man to win back-to-back 100m and 200m titles at the Olympics
“I think everybody pees in the pool. It’s kind of a normal thing to do. Chlorine kills it so it’s not bad”Another reason rivals will be happy the greatest ever Olympian Michael Phelpshas now retired from swimming

TWEETS OF THE YEAR

@BradleyWiggins What a day, blind drunk and overwhelmed with all the messages, Thank You everyone it’s been emotional [with a photo of him having a well-earned beer]

@QuadeCooper If people want to go out there and play a boring brand of football then there’s other guys they can pick to do that.

@gonnnzo If they banned crying and hugging from the Olympics, the whole thing would take a day and a half tops.

@MichaelPhelps “Don’t cry because it’s over. Smile because it happened.” – Dr. Seuss