A bid for freedom: Why Wikileaks founder Julian Assange is running for a seat in the Australian Senate

Greg Barnes, ex-head of the Australian Republican Movement, was last week announced as Assange’s main man for the WikiLeaks Party campaign for a seat in Victoria.

According to Barnes, who lives in Hobart, the “sorts of values” Assange brings to the political landscape include “greater transparency in decision making” and “an examination of the way that the state in Australia is encroaching on the rights of individuals”.

He added: “These are the sorts of issues which do concern Australians. And the current political parties in Australia don’t address either of those issues. Julian Assange certainly does. And he’s got runs on the board when it comes to walking the walk and talking the talk through WikiLeaks.“

However, for the past nine months, Assange hasn’t been doing much of either, having been holed up in the Ecuadorian embassy in Knightsbridge, London, where he has been granted political asylum.

The 41-year-old is fighting extradition to Sweden where he faces sexual assault claims made by two women. Assange and his supporters fear it’s a conspiracy against him, that if the former computer hacker faces court in Sweden, the US will try to extradite him to stand trial for conspiracy or other charges arising from WikiLeaks obtaining thousands of secret US military and diplomatic reports. 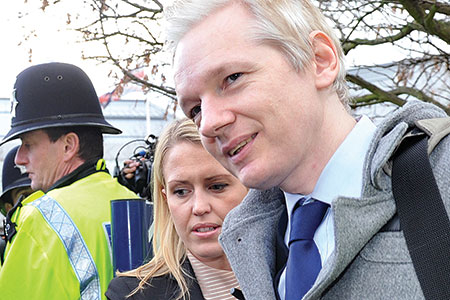 It’s an affair that has seen the rise and fall of the “internet freedom fighter”, whose high-profile backers– including a former British Army captain and a Nobel-prize-winning biologist – were ordered to forfeit £93,500 in sureties when he broke his bail conditions last year.

The turn of opinion against Assange, whose critics argue should face charges in Sweden, was quick.

Millionaire activist Jemima Khan, who also lost her bail money, wrote a scathing piece for the New Statesman, stating: “WikiLeaks – whose mission statement was to produce a more just society based upon truth – has been guilty of the same obfuscation and misinformation as those it sought to expose, while its supporters are expected to follow, unquestioningly, in blinkered, cultish devotion.”

So is Assange’s fear justified? Is it realistic should he face the assault claims in Sweden that the US would get its claws into him?

Swedish Supreme Court judge Stefan Lindskog thinks not. In a rare public appearance, the high-profile judge gave a lecture at the University of Adelaide last week, claiming Assange may be safe from extradition to the US even if he returns to Sweden.

Judge Lindskog admitted the case against Assange was “a mess”, telling the crowd: “It should never be a crime to make known crime of a state.” 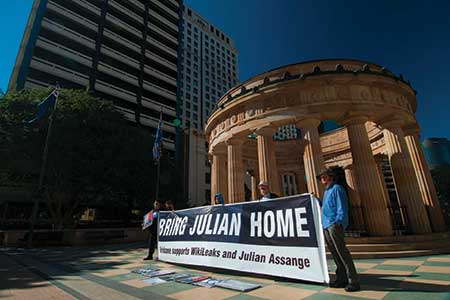 And Justice Lindskog, who went into an extraordinary amount of detail about the sexual assault case, added: “Extradition shall not be granted when alleged crimes (are) military or political in nature.”

Prior to the speech, Assange had condemned Justice Lindskog’s decision to speak in Australia, calling it “absolutely outrageous”.

Assange, an Aussie citizen, revealed last year he would run for the 76-seat Senate, citing using the protection of parliament to champion free speech and break court suppression orders as his motivation.

And despite Assange’s current situation and the split in public opinion, Barnes believes his fair-haired employer has a “very good chance” of winning a seat in Australia’s upper house.

There are six senators elected out of Victoria, and Assange will need 15 per cent of the vote to win. Barnes told Aussie radio station RT: “At the moment … 25 to 27 per cent of Australians say they would vote for Assange. So he’s starting from a very high base … it’s a very good place to start.” 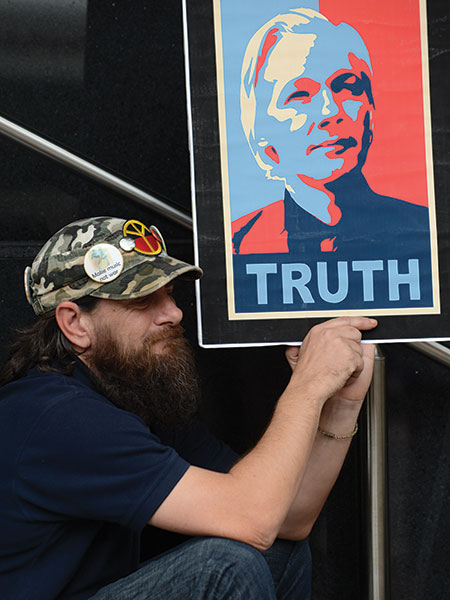 Barnes said Assange’s policies will be determined over the next few months, adding: “The party will offer a refreshing change from the Australian government culture of secrecy.

“What I can say at this point is that he certainly stands for … using [the Australian Senate] more effectively to keep the government honest about what they are doing. So not simply rubber-stamping policies.”

However, Assange is still considered a long shot. If he makes it through, he’d take up his seat from July 1, 2014, but, crucially, would need to return to Australia to be sworn in. Ultimately, Assange’s bid for the Senate also marks his bid for freedom, Barnes explains.

“I think it would be incumbent on the Australian government to exercise the diplomatic and political capital that it has got with Stockholm, with London and with Washington to ensure that Julian Assange can rightfully return home and take his place in the Senate.”

Does Julian Assange deserve a seat in the Senate? Write and tell us your views – letters@tntmagazine.com

The King’s Speech – review and trailer

Vegas, where everyone’s a sinner: Dive into a world of glitzy casinos, glam showgirls and Elvis impersonators