A climb to the Gods

I’d flown to Bali in Mid July 2015 for a different kind of break. The agenda full of activities, unlike the lazing around the beach sipping pina-colada route that many visitors go down on this lovely Island.

I will never forget the trek up Mt Agung. 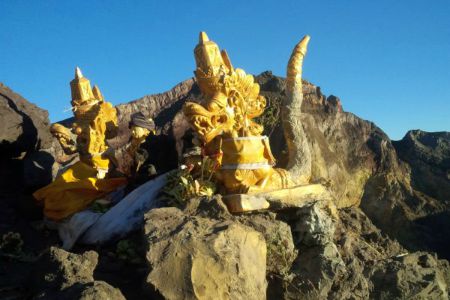 We arranged for all six of us to start moving up Mt Agung at midnight so that we could catch the first rays of sun at the top. All the websites I visited warned me that Agung was tough, far tougher than Batur. This volcano is the highest point in Bali with a huge spiritual significance to the Balinese people. The most important temple in Bali, Pura Besakih, is located on the slopes of the mountain. The active volcano last erupted in 1963-64, killing 2,000 people and spewing debris 10km into the air.

A little later than scheduled we started off at 130am in a cloudless, starlight night, accompanied by two Balinese guides. We passed through Pura Pasar Agung temple a few minutes later, then the terrain got tougher as the trail entered thick jungle and became steep.

From the jungle we entered rocky world of unending slopes that varied from 30 to 45 degrees of craggy molten lava that had solidified after the last eruption.

After an hour I started to slow down, the others went ahead. My heart beat was racing and I was quickly running out of breath. I wearily turned to Nyoman, one of the guides who explained that we were about a third of the way up and it was going to get more challenging.

We kept moving and the unmarked half way point we reached at about 430am.  I looked back and saw the twinkling lights of a town below. At this painful, snail’s pace if I made my way to the top it would not only be far behind the others but also too late for the sunrise.

Nyoman said quietly “Maybe you want to stop here.  Wait for the others to come back. Then all of us go down.”

Reality hit me hard. Perhaps she WAS right. Nyoman was a native who knew the terrain and distance extremely well. She’d guided hundreds of hikers up this very same route. She’d also assessed me. Was this the end? But how could it be?

“We go up” I said finally “and keep moving”. I didn’t know how far I could continue, but I knew that I wasn’t ready to give up at that point.

I picked up speed and from that point the climb took on a fast non-stop scramble. I reached the caldera rim at 620am, after five hours of trekking and just ten minutes before the magnificent sunrise.

I sat on a rock and watched the sun rise over Bali. For now, I would savor the joy and relief of success.

Binod is a Chartered Accountant and CFA Charter holder who runs a successful financial training company based in Dubai.