A Tale of a Festival City

The atmosphere in the city is electric with performers all wanting to introduce themselves and get you into their shows later that day, leaflet distributors doing the same and visitors gasping at one awesome site to the next, just three feet away from the one before. People are singing, dancing, yelling and laughing; everyone is having a ball. The streets are crowded, but it’s still somehow possible to wander along High Street (where it’s all happening) at a relaxed pace.

Then there’s the running around between shows; comedy, opera, drama, cabaret, dance, children’s shows, music, the spoken word, events, exhibitions, galleries and the outstanding food stalls around George Square. The best haggis and chips I’ve ever had. They even sell lobster. It’s got to be the poshest street food I’ve come across before.

Edinburgh’s reputation as a leading international destination relies on the growing appeal of its festivals. World-class cultural events need a world-class city and Edinburgh has arrived, and is sure to stay on the world-class stage.

If you think five festivals seems a lot for one city, you’re in for a surprise. Edinburgh is host to 12 major festivals throughout the year and all manage to reinvent themselves every year to keep people going back.

The Jazz and Blues Festival is the biggest festival of its genre in the UK. You’ve missed 2016, but there’s always 2017 to look forward to. This year there were 140 gigs at 13 venues across the city, filled with local and International talent. A highlight of the festival is Mardi Gras in the Grassmarket, where people head to eat and drink. It’s best to arrive early, grab an outside table, watch the acts and watch the world go by. 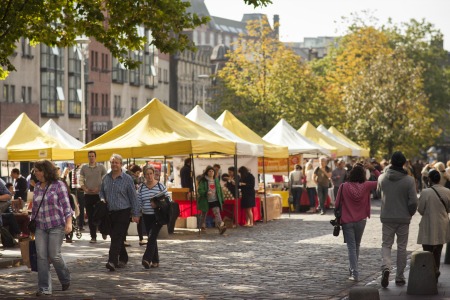 More than 40 of Edinburgh’s galleries, museums and pop-ups (I even came across one outside the airport) offer free entry to most of the exhibitions. Highlights this year include Tim Dodds, Susie Green, Emma Hart and Susan Mowatt: Still life with flying objects, Jo Spence at Stills Centre for Photography, Alice Neel: The Subject and Me’ at Talbot Rice Gallery and The Brownlee Brothers, Dorian Jose Braun, Paloma Proudfoot & Aniela Piasecka and Jack Saunders at Platform 2016. Many continue after the festival, so check for updates.

It’s not actually happening this year, but as part of the festival calendar it still needs highlighting. Another lively weekend in Edinburgh, when the world performs in the city. Whatever you can think of you’ll more than likely find it at the Edinburgh Mela; Ghanian drumming, Bangladeshi hip hop, capoeira, Argentine tango and so much more. It’s the weekend of dance and performance and it gets lively to say the least.

An explosion of everything great, with 3,269 shows across 294 venues happening throughout August. Highlights for me this year included Puddles Pity Party: Let’s Go!, Labels and 360 All Stars. Wandering the streets for hours on end, watching endless street performers day and night also made the top of my list. You’ll need a comfortable pair of shoes for this one. The party goes on pretty much throughout the night, every night. 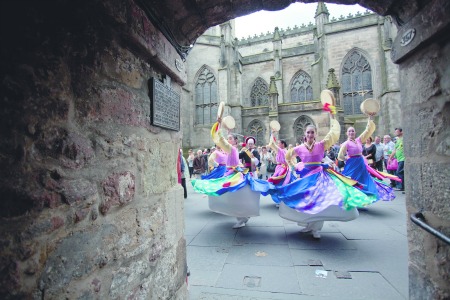 You may have seen clips of it on the TV, but nothing prepares you for the Tattoo. It’s a guaranteed sell out every year featuring bagpipes, dance, drums, military bands, singers, the lone piper and fireworks from the roof of Edinburgh Castle. Tickets aren’t easy to come by so if you get your hands on them you’re very lucky. The first Military Tattoo happened in 1950 and so I’ve been told they’ve not cancelled a single one in all that time. Now that’s dedication for you. 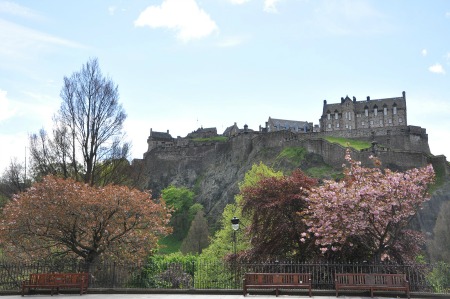 This is the event to meet your favourite author and get to meet new ones alike. The Edinburgh International Book Festival is the largest celebration of the written word in the world. If you think it’s just a bunch of bookworms reading books, then think again. The area around Charlotte Square Gardens attracts over 900 participants from around the globe. Visitors head to the gardens to soak up the atmosphere, join in creative workshops and have fun. Edinburgh is the world’s first city to be awarded the UNESCO City of Literature.

The city has a six-week break; the people need to sleep in Scotland as well. For centuries the Scottish people have told stories with music and song. The ten-day celebration offers the opportunity to visit Edinburgh and find out more about the countries cultural history.

I’d be surprised if you haven’t heard of Edinburgh’s Hogmanay, it gets worldwide coverage and is the only three-day New Year celebration in the world. It’s a lot different to going to the pub in London until 3am. The Edinburgh City Festival website sums it up perfectly, “Three days of spectacular events, incredible bands and amazing crowds from every corner of the globe. See Shetland Vikings bearing firelit torches, hear beautiful choral singing in St Giles’ Cathedral, enjoy birling to traditional Scottish music in the Old Town, and watch top stars and incredible fireworks from Princes Street Gardens. Edinburgh’s Hogmanay shows the world how to party!” Time to getting learning the words too Auld Lang Syne. This year for the first time, many of Edinburgh’s pubs, bars, restaurants and shops will open on New Year’s Day, so there is no excuse not to head up. Who wants to miss the greatest party of the year? Not me. I’ve not done Hogmanay in Edinburgh yet, but I plan to.

The world’s first festival of science covers everything from ghosts, chocolate and laughter through to naturalist and geologist Charles Darwin. I don’t know anything about science so I’m not going to go on here, but the two-week celebration of workshops, tours and demonstrations is a large scale operation and draws in a large crowd.

The festival for children and young people with fun performances, events and fun things to do. Once it’s finished in Edinburgh, the festival tours other parts of Scotland.

Showcasing the best in local and international film and documentaries at various venues across the city. Previous premieres have included Dr Zhivago, Taxi Driver, Manhattan, Blade Runner, Back to the Future, Pulp Fiction, ET and The Motorcycle Diaries.

So if you think that’s it, think again.

Fifteen years of Buttoned Down Disco

Enjoy the Beauty of Goa