Discover Redfern with South of the Border tours

“I once found a dead body lying on the side of the road on my way to work.”

It’s not everyday you meet a local from Sydney who can tell you about the rise and fall of Redfern’s, The Block.

But long-time resident and local shop owner, Graham Rowe, has a story that you just won’t hear about unless you’re properly introduced to the locals. And that’s where South of the Border tours come into the picture. Strong community consultation results in the intimate stories and vivid recounts that set this tour apart.

It was a rainy Saturday afternoon when we started off our journey at the Town Bike Pitstop. With a free coffee in hand, we set out to explore the rich history Redfern has to offer, along with two trusty tour guides, Elda and Laura.

Ever wondered which gym famous boxer Anthony Mundine trained at? We were invited into the ring to see where all the magic began. 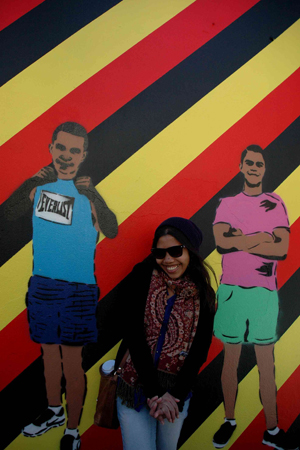 Want to know a story about why the emu can’t fly? We visited the mural that tells it all. Want to walk through a dusty alleyway of The Block? We were climbing the steps in forgotten rubble.

Towards the end of the tour, we made our way to the Eveleigh Markets at Carriageworks. Elda and Laura had set up consultations with farmers to explain to us how they make their produce. Taste and try the array of free samples and if you’re lucky, you might just score yourself a free bag of lettuce.

There is so much to see and do in Redfern that it seems three hours isn’t enough. And with each tour taking a slightly different route than the last, it’s no surprise people are coming back for more. 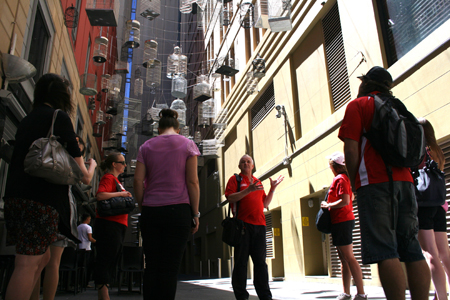 If you’re looking to get to know parts of Sydney in a fun, friendly way, the Sydney with Conviction tour is for you. It’s an informative, yet light-hearted, approach to learning about how Sydney, originally supposed to be named Albion, came to be.

The tour makes its way from Circular Quay, winding its way through The Rocks and eventually making its way down to finish in Hyde Park by following Sydney’s tank stream, which provided the British colonists with a source of fresh water.

All the while, as you meander through and get lost in the streets, you find yourself getting lost in the stories, seeped in history and told with enthusiasm by tour guides who exude passion for the tales they’re bringing to life. 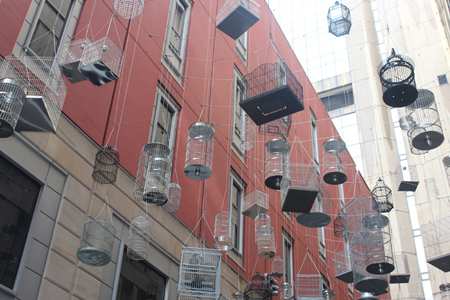 The groups are small, which make them intimate and personal, and most of the tour guides are also actors who know how to project their voices and set the scene of Sydney’s past brilliantly.

The tour unfolds Sydney’s past through its present, revealing its early days with through tales of its convicts, its leaders and everyone in between.

The Sydney with Conviction Tour is run by Sydney Urban Adventures. The two hour tours cost $40 per person. Other options include a highly-reviewed Kings Cross – Crime and Passion Tour. See: sydneyurbanadventures.com