Although it’s not considered one of Marlon Bando’s greatest screen moments, I’ve been intrigued by Tahiti since first watching Mutiny on the Bounty. When the opportunity to visit arose, rather than succumb to the luxuries of 21st Century Tahiti, I decided to try and seek out the island’s other side.

Hidden deep within the lush tropical rain forest, 1800 metres above sea level, in Tahiti’s volcanic interior, the ancient village of Fare Hape is far away from the typical Tahitian retreats that dot the island’s pristine coastline. Surrounded by mountainous cliffs strewn with waterfalls and rich in vegetation, it was once a bustling village, home to thousands and at the heart of island life. 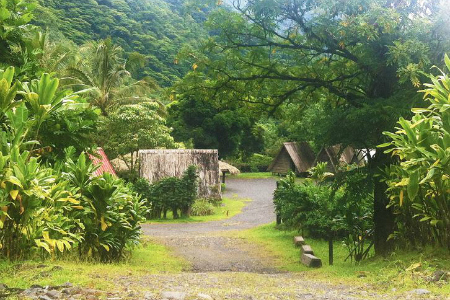 Following the arrival of the missionaries in the late 1800s, most inhabitants relocated to the coast, leaving Fare Hape deserted and forgotten. Today, faithfully rebuilt according to ancient customs, it’s maintained by the Haururu Association as a site of archaeological importance and a place for those wishing to study Polynesia’s past.

Papa Apon is one of the site’s guardians. As he brings the 4×4 we’re travelling in to a halt, he gives me a broad toothy smile. He’s clearly proud of the restoration work achieved here. There’s a large wooden meeting house, open at the sides, furnished with wooden pews and thatched with ferns alongside around nine fairly primitive lean-tos with sharply pitched roofs, raised off the floor on stilts.

There’s a wooden store room overlooking a river flanked by large boulders, alongside a communal cooking area. An industrial sized hob running off a rusting gas canister with its wily assortment of pots and pans is the first sign I’ve seen of 21st century involvement. There’s also a suspiciously large box of mosquito repellent coils which Papa Apon helpfully points out whilst giving me another one of his toothy grins.

The real jewels in the crown of Fare Hape are the remains of several Maraes, stone platforms used for ceremonial purposes. They offer a window into the history of a culture that until recently risked having some of its elements long forgotten.

It’s difficult to be certain about the beliefs and practices of Fare Hape’s settlers when so much of their history was handed down orally. It’s widely accepted that ceremonies would have acknowledged ‘Oro’, The God of War, revered across Tahiti. The word ‘Marae’ translates as ‘cleared of trees and weeds’ and would have been considered ‘tapu’, a holy or sacred place, from which the word ‘taboo’ is derived.

Eventually, it’s time for Papa Apon to leave. As I nervously unload my pack from the 4×4, he assures he’ll return at the same time tomorrow to collect me. I turn to gaze at the deserted village that surrounds me. Although I wouldn’t consider myself a particularly spiritual person, I can feel that where I am is a spiritually significant place.

I’ve equipped myself with everything I’ll need for the next 24 hours, including water, food and perhaps most importantly, a mosquito net. I’ve camped alone many times though never in a place where its ancient inhabitants have weighed so heavily on my mind. I take a walk around the village to get my bearings and to confirm that I’m definitely on my own. I feel like a homeowner, creeping around and half expecting to surprise a burglar.

Papa Apon told me about a waterfall that I’m keen to hike to in the morning, so it’s imperative that I get a good night’s rest. I select one of the lean-tos and lie restlessly in the sweltering heat, unable to drift off. In the absence of sheep, I count mosquitoes. When I run out I go back and start naming them.

I wake up early, feeling surprisingly refreshed. It’s not too hot yet and there’s no sign of any mosquitoes. They seem to enjoy a leisurely start to their day so I’m assuming that they must all still be asleep. After a breakfast of fresh fruit, I set off in search of the waterfall. The way Papa Apon’s eyes had lit up when describing its beauty was telling though it’s hard to comprehend that I’ll be travelling to a place more magnificent that the one I’m in.

Within hours of leaving Fare Hape the trail is barely visible, the heat unbearable. I find myself on a steep hillside with my eyes glued firmly on the uneven ground that I’m desperately trying to navigate. I can hear the sounds of the Tuoru River flowing further down the valley which will eventually lead me to the waterfall. The thought of cooling off in its crystal clear waters keeps me going.

Tahiti doesn’t do predators, though I’ve seen a couple of giant centipedes that I don’t fancy getting too familiar with, and the mosquitoes have become unbearable. It’s as if word has spread throughout Tahiti’s entire mosquito population that there’s a foolish pale skinned Englishman in these parts and that they’re all out to get me like a real life insect version of The Hunger Games.

Finally, I emerge from the rain forest and reach the valley floor. The next part of my journey involves navigating the river upstream, clambering over ankle-breaking boulders, wading through the water and where it becomes impassable, searching out paths along its banks. It’s at the end of the rainy season otherwise this journey would be impossible. Between November and March the Tuoru River rages with such force the Papenoo Dam, further downstream is fed with enough energy to supply nearly 70% of Tahiti’s hydro electricity. 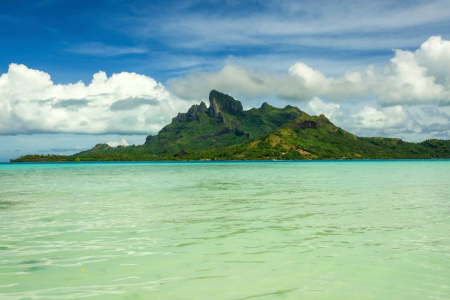 I’m surrounded by Tahitian Chestnuts with wide twisting flat roots, fragrant flowers and wild passion fruit, which provide great trail snacks. Ahead of me I can hear the sounds of the waterfall. The crude path I’ve been following veers upwards sharply, as I carefully navigate the rocks and tree roots underfoot. The mosquitoes are back too, and this time they’ve brought reinforcements.

Eventually I reach a gap in the trees and there it is, possibly one of the most beautiful sights I have ever seen. I’m so overcome that I feel like kneeling down and crying. A smoothly curved tear-drop shaped basin of deep turquoise water, fed by the most majestic waterfall raining down from steep tree covered cliffs. It’s like something out of a fairytale and all I can do is stare in wonderment, trying to take it all in.

I clamber down to the water’s edge from which a pebbled beach stretches back into the forest, bordered on either side by bright green plants with delicate white flowers. Tiare are worn by Tahitian women in their hair and their presence seems appropriate given that this whole scene looks like something out of a shampoo commercial. Without hesitation, I climb into the cool water.

Once submerged, the sheer beauty of this place I imagine few others have seen starts to sink in. I decide to construct an Inukshuk out of the stones on the beach. It’s a peculiar habit I’ve developed after living in Canada but one I only reserve for truly special locations. We pose for a few photos together before I depart on the trek back to Fare Hape and my ride returning me to civilisation.

When Marlon Brando filmed Mutiny on the Bounty he liked it so much he married his co-star and bought an island. Tetiaroa will now become home to French Polynesia’s latest luxury eco-hotel, The Brando. As I imagine the extravagant levels of opulence that it will undoubtedly afford its guests, I feel privileged to have succeeded in my quest to escape Tahiti’s’ luxurious side.

However, the irony is not lost on me that my quest led me to one of the most exquisite places I’ve ever visited, where I was able to bathe in my own private pool complete with an impressive cascading water feature, all set in the most idyllic surroundings of Tahiti’s interior. 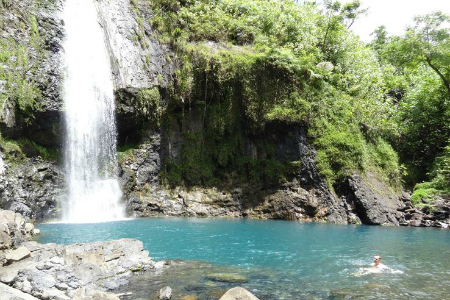 RWC: Australia versus Scotland the facts

Club: Gawd Save The Queen