Pride of France: Lyon in 48 hours

09:00  Enjoy croissants and pastries over a chat with Hotel du Simplon’s (hoteldusimplon.com) charming hostess Madame Alix Reverchon. This elegantly old-fashioned B&B is well-located in the peninsula between Lyon’s Rhône and Sâone rivers. Rooms start around £48pppn.

10:00  Visit what is arguably Lyon’s most spectacular feature: its 50km of traboules. This network of underground passages dates back to the fourth century, and was used by workmen and craftsmen to transport their wares around the city. Most traboules are located in Lyon’s Renaissance District, a Unesco World Heritage Site. Make your way across the Rhône to the Lyon Tourist Office (en.lyon-france.com) on Place Bellecour, where you can grab a free map marked with all the traboules, or take a guided tour for around £6.

13:00  Head to Les Halles de Lyon, the city’s famed indoor food market. Lyon is known as the capital of gastronomy in France, so all appetites will be satisfied by more than 60 stalls selling local produce.

14:00  Lyon is a hub for art museums. Try the nearby Musée de Beaux Arts (mba-lyon.fr), featuring the likes of Rembrandt, Monet and Picasso, or the ultra-hip La BF15 (labf15.org), showcasing cutting-edge art installations on the banks of the Rhône.

16:00  You’ve earned a rest after all that artsy meandering, so stop by the Jardin Rosa Mir, in the centre of the La Croix-Rousse Quarter, for a breather. A walled garden decorated by thousands of sea shells, it was created by Spanish artisan Jules Senis to celebrate his surviving cancer. Find it via the narrow path next to 87 Grande Rue de la Croix-Rousse.

17:00  End the day at Place des Terraux, a short walk from the garden. This central square is most famous for its grand 19th century fountain, sculpted by Statue of Liberty creator Frédéric-Auguste Bartholdi.

18:00  Lyon is host to a galaxy of Michelin stars, so if you’re going to splash out on a fancy dinner, this is the place to do it. Mère Brazier (lamerebrazier.fr), formerly the first restaurant to earn Lyon a trio of Michelin stars in 1933, has been reinvented by chef Mathieu Vianney for today’s discerning diner. Vianney may only have a paltry two Michelin stars, but it should be a decent feed all the same. If you’re looking for something a little less demanding on the wallet, head to Le Petit Léon (leondelyon.com), the affordable sibling of nearby big brother Léon de Lyon.

21:00  To round off, hark back to your arty afternoon in basement bar Furib’Arts (furib-arts.com), where microbrews complement local artworks and live bands.

10:00  Kick off the day in style by breakfasting or brunching with the fashionable set at Cafe Cousu (cafe-cousu.com), a cute hole-in-the-wall that also does a decent line in home-made cakes. Brunch starts at 11am.

11:00  You’ve seen the city from below-ground, so now it’s time to see Lyon’s stunning Gothic and Renaissance architecture from above. Aside from the ubiquitous open-top bus tour (Le Grand Tour, pariscityrama.com/fr/
visiter_lyon), a more eco-friendly option is to ride around in an electronic-trike-cum-rickshaw, known as a Cyclopolitain (cyclopolitain.com). Tours cost around £30 for an hour for two people, and most  station around Place Bellecour and Place des Terreaux. Also see if you can catch the Crafts Market (quai de Bondy) by the Sâone before it closes at noon, where artists sell paintings, sculptures, photographs and more.

13:00  Head up to the fusion-tastic Oxalis (lessardinesfilantes.fr, 23 rue de l’Arbre Sec) for lunch, where Mediterranean, Asian and African cuisine meet to make a memorable meal. Cooking lessons are available.

14:00  ‘The birthplace of cinema’ is yet another claim to fame for Lyon, as the Lumière brothers – among the earliest filmmakers in history – were based here. Check out the Musée des Miniatures et Décors du Cinéma
(mimlyon.com) for a quirky insight into the use of miniatures in movie sets and special effects. 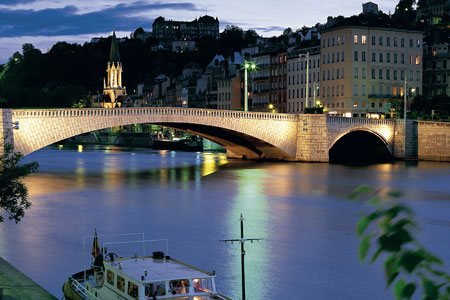 16:00  After all this culture, you might like to let off some steam at I-WAY (uk-i-way-world.com), where a high-tech F1 simulator is guaranteed to get your heart racing. You can race other simulator pilots for around £80.

Fly from London to Lyon direct with easyJet from £115 return (1h45mins). easyjet.com Catch the Eurostar from London to Lille, then take a train with TGV from Lille to Lyon from £109 return (4h40mins).  eurostar.com; tgv-europe.com.

Other traveller reviews on Cuba