An ash cloud spewed from Iceland’s most active volcano is heading for the UK and is expected to reach Scotland by midday on Tuesday.

Although warnings have been issued, the ash cloud is not expected to cause the same travel chaos as the eruption of another Icelandic volcano last year which led to the six-day closure of airspace.

Airlines have been told that the new ash cloud is likely to drift and both the UK and other European countries are waiting to see how their air routes will be affected by smoke and ash from the volcano.

The latest warning is based on five-day weather forecasts but according to experts, if wind patterns change, the ash cloud will be blown away from the UK.

If the volcano continues to erupt at the same rate and winds do not change, however, ash could reach northern Scotland by tomorrow and spread to England, France and even Spain by Thursday or Friday. 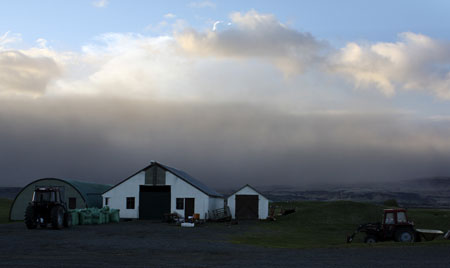 An ash cloud from the Grimsvoetn volcano darkens the sky.

Europe’s air traffic control organisation warned on its website that ash could spread.

“Ash cloud is expected to reach North Scotland on Tuesday 24th May. If volcanic emissions continue with same intensity, cloud might reach west French airspace and north Spain on Thursday 26th May,” it said.

The eruption of Grimsvoetn, Iceland’s most active volcano, began on Saturday, blasting out a plume of smoke and ash 12 miles high.

Icelandic towns nearby were plunged into darkness as the thick cloud of ash covered the area, settling thickly on cars, streets and buildings.

The ash cloud had reached the capital, Reykjavik, by late Sunday evening and the civil aviation authority said the main international airport was likely to remain closed for the start of the week.

In April last year, the eruption of Iceland’s Eyjafjallajökull volcano closed the airspace of 34 countries over fears that ash particles could cause jet engines to stop.

Millions of passengers were affected and the International Air Transport Association (IATA) estimated that the global airline industry lost £130 million a day.

The impact of the Grimsvoetn eruption should not be as severe and is likely to mainly affect Iceland, said the experts.

“It could lead to some disruption, but only for a very limited time and only over a very limited area. We see some signs that the (eruption’s) power is declining a bit, but it is still quite powerful.”

Vulcanologists said the disruption of air travel would this time e more limited as winds were more favourable and the ash cloud is heavier and less likely to spread.

After being criticised for over-caution during last year’s volcanic eruption, authorities also have higher safety threshold for ash levels.

Video: Clip of dolphins showing off during WA tourist cruise

A BBQ is a BBQ