While Peter Siddle was the fifth bowler to get a run after Michael Clarke declared at tea, he was the man to do the damage.

He took care of second Test centurian Joe Root and nightwatchman Tim Bresnan, both caught behind to Haddin, leaving England 2-52 at stumps on day two. 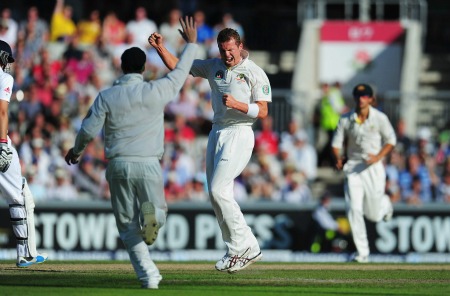 Alastair Cook has struggled but survived, as he does, to end the day on 36 not out, while Jonathan Trott is on 2 not out.

Just as Graeme Swann enjoyed the conditions, with 5-159 getting his 17th five-wicket haul in Tests, Nathan Lyon has looked the goods for Australia.

Earlier, James Anderson struggled for the first time this series, with his worst Test figures of 0-116 as Clarke rocketed towards a double ton and his supporting cast earned solid 50s. 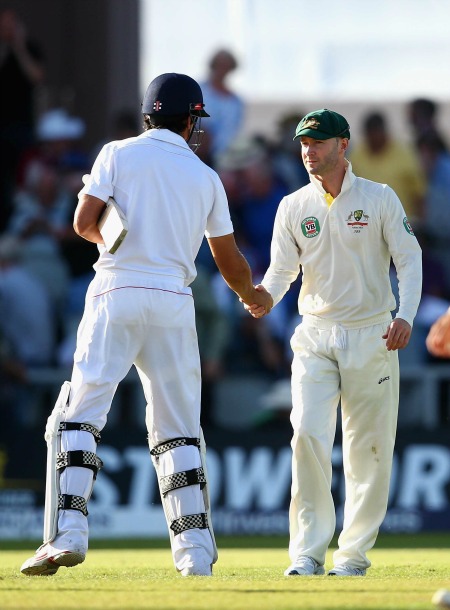 Clarke declared 15 minutes after the tea break to allow his bowlers a couple hours to rattle the England cages before stumps.

While Cook almost fell cheaply to Lyon, who was brought into the attack early, it bounced off Haddin and landed well short of Clarke at slip.

Root looked to be digging in again, with 8 off 57 balls, but nicked Siddle to Haddin.

Siddle, whose batting left much to be desired, snagged Bresnan pulling.

Earlier, Clarke and Smith set a record fourth-wicket partnership at Old Trafford of 214, before Smith threw his wicket away.

Warner went to a nick off Swann, wasted a review, but paved the way for Haddin. 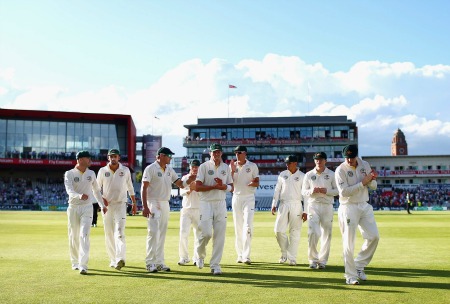 Haddin took on the England attack, adding 62 with Clarke.

Then Clarke gloved Broad onto his pegs, before Siddle gave up his wicket ambitiously going for a slog to mid-wicket.

Haddin and Starc’s effot meant Australia remained dominant, with 97 off 118 balls leading Clarke to decide that was enough at 7-507 at tea.

Clarke brought spinner Nathan Lyon into the attack early after just three overs from each of his new ball bowlers Ryan Harris and Mitchell Starc. 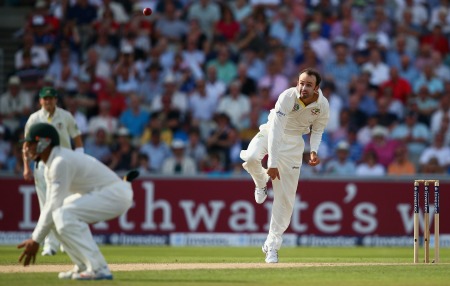 Playing in his first Test f the series, having been dropped for Ashton Agar despite his last Test return being nine wickets in India, Lyon bowled beautifully.

He found turn off unblemished parts of the pitch, a sign of things to come when they bowl second on a ripped up Old Trafford deck.

But it was Siddle who got the rewards first up, with Cook and Trott his next targets.