Sport opinion: We can get crap at sport – being bad losers is not on

I was horrified by the BBC News last week – not all the death and destruction of the world, but a light-hearted report I played a very minor role in. No problem that the Beeb London’s angle was basically, “Why is Australian sport shitter now than it was a decade ago?” It was the revelation that there are some outrageous assholes out there that give us a bad name.

As the reporter scoured London Aussies for reaction to this most pressing issue, he met the Aussie High Commissioner Mike Rann, who gave a ra-ra line about a few losses not hurting us. He came to TNT Towers to be met with poorly articulated sporting clichés along the lines of “swings and roundabouts” and “what goes around comes around”.

The horrifying part came at a pub, an Aussie-themed one, where the female bartender told BBC viewers how much the current Ashes was hurting Aussies – here’s the worst bit – and that there were punters in her establishment with Ashes tickets who didn’t use them because of how the Australian team was going.

This made my blood boil. For starters, this was a pub in London, which meant the tickets were for Lord’s, which means whoever wasn’t using their seat was pissing away cash and a ticket that most of us would lean suggestively on a wall to have. You ungrateful, pathetic excuses for sports fans.

It’s no secret I’m a fan of the Barmy Army. I love the way they go about supporting their team and I’ll never forget being at the Sydney Test during a series the Aussies were set to win 5-0. I asked one of them, Becky Fairlie-Clarke, what she thought of such disregard for team support. Her answer is predictable for the sing-a-long lot: “Supporting the team no matter what is the ethos of the Barmy Army.

Not going to the ground ‘cos England are likely to lose is something I would never dream of.” As I said to the reporter, maybe we Aussies need to learn to enjoy banter from the other side of the coin, and as Michael Clarke and crew showed at Old Trafford, what goes around does come around. 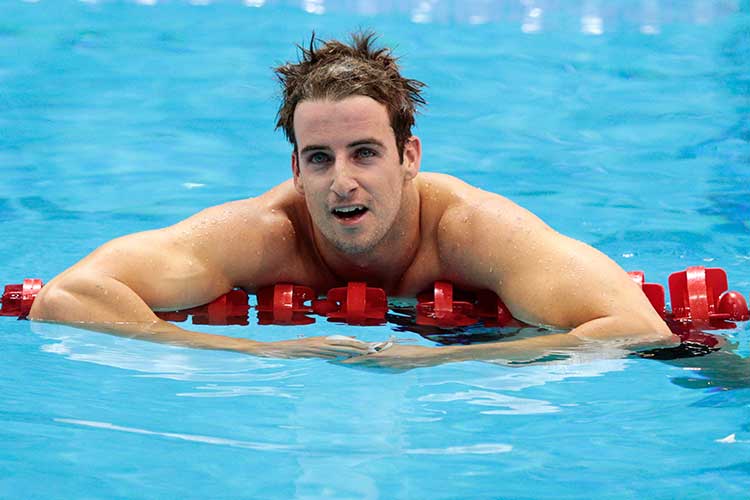 The missile and superb sprenger

That James Magnussen (above) won back-to-back World Championship 100m titles last week is remarkable, but how he did it – with a massive dig for his last morsel of energy from fifth – makes it even sweeter. He’s the Missile again.

The Aussie water rocket talked it up ahead of the London 2012 Olympics, and if you can fall on your face winning a silver medal at the Olympics, he did that.In the lead up to this tournament though the 22-year-old pulled his head in, ate some protein-rich humble pie – probably – and put his head down. The reward was gold, and one that I think most sporting fans won’t begrudge him despite his Olympic village shenanigans.

Clean-skin Christian Sprenger on the other hand has no apologies to make, just a 100m breaststroke title to celebrate. He also missed the 50m title by 0.01 of a second. Still, two golds beats London by two golds. Aussie sport’s not dying (see left) after all.