And the Sydneysider who didn’t bowl at all in the first test made it three wickets for the session soon after tricking Matt Prior into offering an edge to one that went straight on.

After coming in at 28-3, Bell dug England out of a hole with a great knock of 109. Playing conservatively early on to steady the ship, Bell then showed he had the nerve to punish some loose mid-session bowling from Australia’s seamers.

He racked up good partnerships with Jonathan Trott and Bairstow before reaching his ton, in the process becoming only the third player in Ashes history to score 100s in three consecutive Ashes tests. 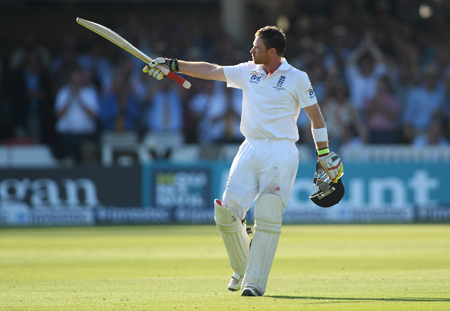 He went not long after passing his hundred to the seldom seen, highly recognisable (his action is almost identical to Shane Warne’s) leg-breaks of Smith.

Bell smashed a loose full toss for four in Smith’s first over, but then got out the next ball. Smith convinced one Warney would have been proud of to turn gently down the slope and nick the edge of Bell’s bat before floating to slip where Michael Clarke was waiting. His bowling change turned out to be a stroke of genius.

Then he must have been wondering if he should have brought Smith on sooner, as he took Bairstow in his next over, the Yorkshireman tamely patting back a gross full toss to the grateful bowler, who also happens to be one of the world’s best fielders. 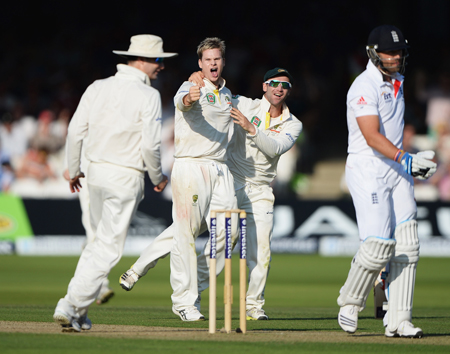 “That’s the thing with Smith,” said Michael Atherton, commentating, “he’s going to bowl some filth, but he’ll throw in a couple of beautiful deliveries every now and again.”

Prior fell on just five runs, to a flipper from Smith, that Prior went to cut, but instead edged to a receptive Brad Haddin.

England sent out nightwatchman Jimmy Anderson to protect Stuart Broad, much to the bemusement of the Australians.

Aussie captain Michael Clarke will be happy with his team’s performance today, with Smith’s late wickets giving the Baggy Greens the edge.

The pitch looked flat at times and the overhead conditions should have made for a comfortable day’s batting, but England failed to take advantage under pressure from an expertly marshalled Australian bowling attack,

Drug may help to combat racism

Poker in the park, London