Play will start 15 minutes later than usual at 11.15am, pushed back by Elizabeth II’s visit, with England set to bat after Alastair Cook won the toss.

It was a good one to win with the sun shining and the wicket looking a gem to score runs on.

“With the heat over the next five days it might turn as well,” Cook said.

As suspected, England have dropped Steven Finn in favour of Tim Bresnan.

“[The decision] was a very tough decision but we just feel this combination for this wicket is the best way to go,” Cook said. “The bowlers put in a huge physical effort at Trent Bridge and for the batters it was a tough mental game but we are ready to go.”

Sticking with a policy of honesty at the toss, Michael Clarke said he would have preferred Shane Watson and Chris Rogers, whose home ground as captain of Middlesex is Lord’s.

“We probably would have batted, not only because the wicket looks good but also as the forecast is great for this Test,” he said.

“I don’t have too much input on selection, but the selectors know me quite well and I back their judgement,” Clarke said. “They make their selections and I do my best with the batting order.”

Clarke is tipped to drop back to his favoured number five position after scoring 0 and 24 at Trent Bridge. 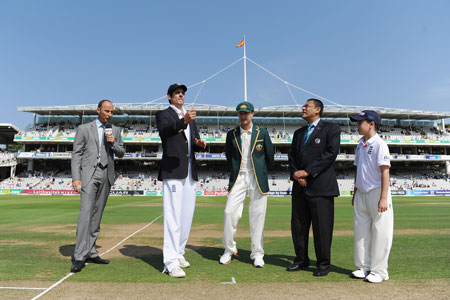