Australia is back on top of the world after the thrilling five-run win over England in their fifth and final ODI at Adelaide.

Michael Clarke’s side claimed a 4-1 series victory to back up the 5-0 Ashes Test series flogging, and have returned to the number one position in the ICC ODI Team Rankings, overtaking India.

The captain hailed his side’s self-belief as they turned around from a loss in Perth to win a low-scoring scrap in Adelaide in which George Bailey’s 56 was the only significant contribution with the bat for the winning team.

“That’s as satisfying a win as we’ve had in a long time as a one-day unit,” Clarke said.

“To be able to get over the line there shows we’ve got confidence in each other’s ability and we believe we can win no matter what position we’re in.”

But the score was tougher than it seemed on a deck that kept low.

“It was a tough challenge for both batting units and bowlers had to find ways to take wickets rather than just blast teams out.”

Man-of-the-match James Faulkner (2-37) took the key wickets of Eoin Morgan (39) and Joe Root (55) when it looked as if England would cruise to a face-saving win.

The key dismissal of all-rounder Ravi Bopara was as bizarre as it was crucial to the outcome – the ball accidentally bounced off Matthew Wade, who was keeping up to Clint McKay,  and onto the stumps.

“It was funny, I had an interesting conversation with Matthew Wade at the start of that over,” Clarke said. “He wanted to go back and I made it very clear I wanted him up to the stumps.

“You need that (luck) … and we certainly had it in that instance in how we got that wicket.” 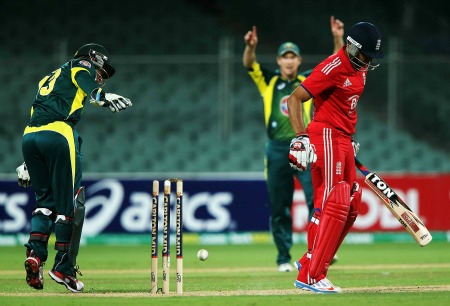 Australia overtook England in the Test rankings, moving from fourth to third, following a 4-0 loss in India and a 3-0 defeat in England leading up to the home series.

However, the Aussies’ one-day form has been much better, claiming the 50-over series in England and going down just 3-2 in a high-scoring seven-match series in India that was marred by poor weather.

They now go back to the top for the first time since July 2012 after moving from 114 ratings points to 117 during the just completed series. However, the tally is so tight that if India can win the two remaining matches against New Zealand they can bump the Aussies off again. The Black Caps lead the five-match series 2-0.

England’s loss puts them back to fourth place, one behind South Africa, Australia’s next opponents in all forms of the game.

State of Origin 3: Queensland dominate Blues to restore some pride after losing series

Dive another day: Up close and personal with grey nurse sharks