American Melissa Sjostedt says she’s wanted to see the fireworks on the bridge since reading about it in a four-page spread in the National Geographic 10 years ago.

“Ever since that I’ve always wanted to see this for real, live, in person,” the 30-year-old from Florida told AAP from Dawes Point Reserve.

“I saw it last year on TV and it looked fabulous. I said to myself ‘it’s something I’ve just got to do’.

“I love Australia and if the fireworks are as good as they’re supposed to be, I might move here.”

Sisters Liann, 25, and Joanne, 19, from Flintshire in North Wales, got to Lady Macquarie’s Chair at 10.30am to snag the best view of the fireworks.

“It’s been a cracker day so far except for the achey bum, I should have brought more pillows,” said Liann as she reclined, drink in hand, on a beach towel. 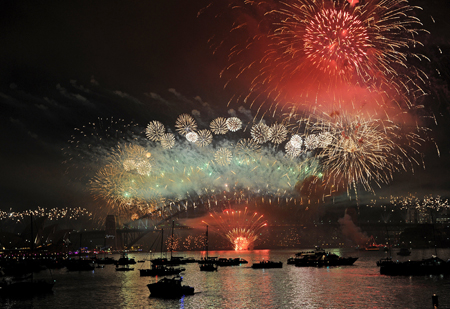 Victorians have been treated to  a fireworks display at The MCG.

More than half a million people filled the city on for New Year’s Eve festivities, with live sites at Treasury Gardens, Flagstaff Gardens and the Docklands.

Throughout the evening, free concert at Federation Square had tens of thousands dancing away the remaining hours of 2012.

Irish sisters Emma and Sophie O’Dowd said they couldn’t resist the lure of the New Year’s lights and sounds, stopping at Yarra Park to see the fireworks on their way to a dance party.

The light show at the MCG was just a taste of the midnight show – a $2.8 million, 10-minute spectacular involving a 22 firework platforms.