On Montpelier Hill, to the south of Dublin, a steep climb through a silent pine forest, stand the ruins of a charred building, its empty windows looking out across the Wicklow Plains. This is the Hell Fire Club, once the scene of Dublin’s most blasphemous entertainment. It was in this now deserted building, during the 18th century, that members of the aristocracy would meet to indulge in ‘immoral acts’, their motto: Fais ce que tu voudras (Do what thou wilt).But this wasn’t your bog-standard drinking and fornicating. Members of the Hell Fire Club were rumoured to worship the devil, carry out strange rituals that involved animal sacrifice and even, on some occasions, the killing of humans.

I climb the crumbling stairs and stand in one of the dark, graffiti-sprayed rooms. I pride myself on being able to whipup a hysterical frenzy and, but alone in the ruins, terror evades me and I find myself drawn to the window with its epic view of the Dublin bay .Still, looking back at the building’s hollow shell as I descend the hill, the place is eerie. Inspiration, perhaps, for one of Dublin’s most famous literary figures, Bram Stoker, creator of 1897 gothic masterpiece, Dracula. Stoker was born in Dublin and the city is full of landmarks likely to have fed his imagination. Now into its second year, the Bram Stoke rFestival (Oct 26-28; bramstokerfestival.com) pays homage with a weekend of vampire and Dracula-related activities.

Onwards in our quest for terror, we board the Gravedigger bus (thegravedigger.ie) for a horror tour of Dublin. The windows are blacked out and we climb to the top deck amid smoke, green lights and the sound effects of a ghost train. The tour is led by young Dublin actor, Shane, Halloween-ready in shrouds and whitened face .I’ve never been on a bus tour but any doubts about enjoying myself are unfounded, and Shane proves to bea brilliant storyteller. He tells us how Dublin was ravaged by the plague, back in the 14th century, a grim time when mothers would hide sick children for fear of banishment, only to be boarded up in their own houses and left to die, terrified neighbours ignoring all screams for help.“There were those who believed the plague wasbrought on Dublin as a punishment from god for all their blaspheming and cursing,” says Shane, prancing down the bus in his rags. “Ferkin eejits.”

Of course, Dublin truly darkest days were not made so by god, nor even the bubonic plague, but by Britain’s brutal rule over the island. The tour stops outside Dublin Castle, seat of British government until 1922, then on to Kilmainham Gaol where many leaders of Irish rebellions were imprisoned and executed by the British. “It would be fair to say, this wasn’t the most popular place in Dublin,” Shane says. Then, looking at me for the prerequisite reminder of my nation’s guilt: “Sorry, London.”The tour ends with a pint in 200-year-old Gravediggers pub, next to the satisfyingly spooky Glasnevin Cemetery. 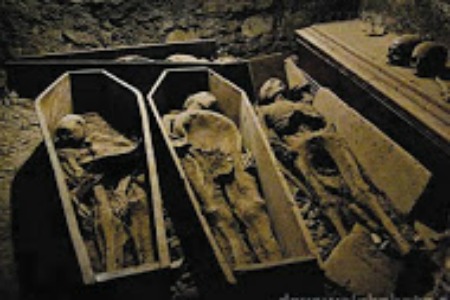 The group is friendly and it appears Shane is not, in fact, holding me responsible for British imperialism. I get a gruesome reminder of Britain’s savagery the next day, with a visit to the crypt in St Michan’s church. Stairs descend through a trap door at the side of the church and we find ourselves in a long, narrow corridor, metal gates along its walls leading into small chambers. And inside these chambers: coffins, skulls and mummies. More ghastly still is a chamber in which lies the death mask of republican revolutionary, Wolfe Tone, and the bodies of Henry and John Sheares, two brothers executed for their part in the 1798 rebellion. Their original death warrant is on display in front of their coffins: to be hung until nearly dead, to have their entrails removed and burned before them, to be decapitated and finally for their bodies to be cleft into four pieces.Yes, Dublin has some ghosts and fantastic figures of horror but, sadly, the bloody deeds of humans are always the most horrific.

We have some amazing deals on tours to the Emerald Isle over at TNT Tour Search.

Building a property portfolio – how to get started