The station itself has remained unrepentant about the hoax which it is touting as the ‘Biggest Royal Prank Ever’.

However the publicist for one of the DJs involved conceded to The Telegraph that the call was just “meant to be fun and silly” and that they “hadn’t expected to get through with our terrible accents”.

John Lofthouse, chief executive of the private Edward VII hospital, condemned the call as ‘journalistic trickery’ in admitting it had breached the Duchess’s patient confidentiality. 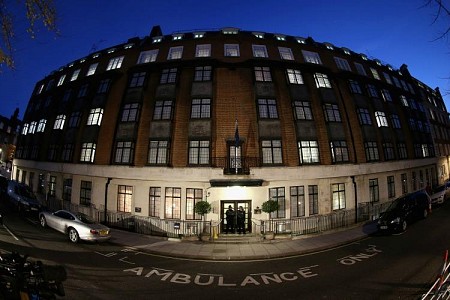 King Edward VII hospital where Kate Middleton is being treated

The Australian Communications and Media Authority said “The ACMA has received complaints overnight regarding the 2Day FM prank call to the King Edward VII Hospital in London,” it said in a statement.

“Complaints should first go to the licensee. If a complainant is dissatisfied with the response, then a complaint can be made to the ACMA.”

“The ‘privacy’ provisions of the Commercial Radio Codes of Practice apply to news and current affairs programs,” it said.

The hoax made headline news across the world yesterday.