Badgered: Fury and contention rise over the cull of 130,000 badgers

At the launch of a campaign in London last week, Queen guitarist Brian May spoke out against the decision, calling the cull “scientifically, practically, and ethically indefensible”.

As he unveiled the first of a series of billboards, May said: “We won’t rest until every man, woman and child in Britain knows about the tragedy unfolding in their countryside.”

The badger cull is proving to be as nationally divisive as fox hunting.

For those from overseas, the passion triggered by the slaughtering of badgers may seem disproportionate, but England is a country with few remaining large wild mammals (wolves, bears, lynx and elk once roamed here) and many are fiercely protective of the species that remain.

“The badger is an iconic symbol of our British wildlife,” says May. “Badgers have been living in the British Isles since thousands of years before man arrived. Let’s not be the generation that stood by and watched them slaughtered.”

According to the government, the cull is necessary to curb tuberculosis in cattle. Despite the fact that human infection is rare, the disease resulted in the slaughter of 32,000 cows last year. The first licence for farmers to shoot badgers was issued last Monday and plans are for the cull to be rolled out across the UK. An estimated 130,000 badgers will be shot.

Opponents, including scientists and animal protection agencies such as the RSPCA (stopthecull.org) question whether killing badgers is actually an effective means of controlling bovine TB.

The cull is based on a nine-year trial which showed that if more than 70 per cent of badgers in an area were eradicated, bovine TB would be reduced by 16 per cent locally and three per cent nationally. It’s hardly a dramatic result, and Lord Krebs, the scientist who carried out the previous trial, has called the new cull “crazy”.

“The government is misleading desperate farmers for its own short-term political gain,” Joe Duckworth, chief executive of the League Against Cruel Sports said. “The cull won’t work. In 100 years, there will still be bovine TB.” He believes that there are other solutions. 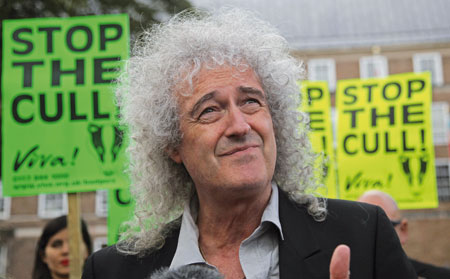 “A cattle vaccine is near to being approved, and is currently being trialled in Wales, which has decided not to cull despite being faced with the same problem.

Strict animal husbandry, vaccination, restriction of movement and cleanliness would be effective,” he added.

Suggestions of alternative controls have been dismissed by those in favour of the cull. Phil Hudson, head of food and farming at the National Farmers Union, told TNT that the licensing of a TB vaccine for cattle was still some years away.

“The National Farmers Union supports badger and cattle vaccination, but there are real issues with these. Trials in South Africa show that the effectiveness of a cattle vaccine may be only 50-60 per cent,” he said.

Hudson also disputes the findings of Lord Krebs’ trial study. “We are seeking to cull much bigger areas than the 2005 trials,” he said. “We should be looking at a decline in TB of around a third of cases.”

Not only are animal rights groups unconvinced that the cull will work, however, they also fear it will not be carried out as professionally as the government might wish. English Nature said last week that it had “a low level of confidence” in the ability of farmers to coordinate the cull effectively.

The RSPCA’s West Hatch Wildlife Centre in Somerset, near one of the first cull areas, will be monitoring how it is carried out, with veterinary staff checking badger carcasses for evidence of poor shooting and the suffering of badgers as a result.

Hudson is adamant that this will not be the case. “The licensing process is extremely strict,” he said. “Individuals who carry out the cull will undergo special training.” 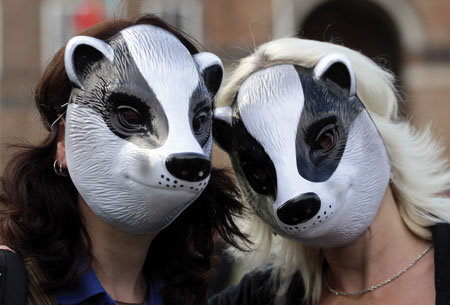 The National Farmers Union is not insensitive to the anger caused by the cull. “We understand this is a difficult issue for the public,” Hudson said. “But it’s also difficult for the farmers. No one wants to see the slaughter of 32,000 cattle.”

Wildlife campaigners are unlikely to be convinced by these arguments. According to Duckworth the badger cull is nothing more than “dirty politics”; an attempt by the government to win votes by placating worried farmers.

“Badgers are seen as having no value,” he says.

The government and National Farmers Union are, rightly, expecting protests across the country.

“We have heard from local sabotage groups that many of them plan to take peaceful, non-violent direct action against the cull,” said the Hunt Saboteurs Association, known for its physical intervention of fox hunts and militant stance on animal rights.

It’s been reported that some groups are planning action, to be directed at farmers involved in the cull, including fireworks, vuvuzelas and other noisy night-time protests aimed at causing sleep deprivation.

Duckworth urges caution to those who would put themselves physically within range of an active badger cull.

“We’re desperately worried about direct action,” he said. “We’ve heard about people planning to go out and stop shoots.

Farmers will be armed with high-velocity rifles and, much as though we don’t want to see badgers killed, we don’t want people to get hurt.” 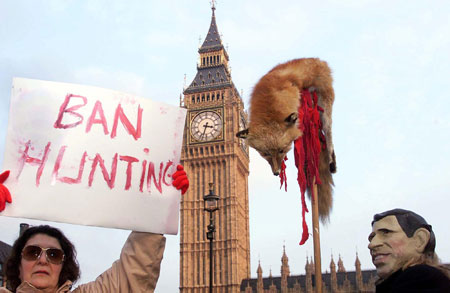 Soon after the millennium, Britain was rocked by mass protests both in favour of and against fox hunting. For the Range Rover-driving country set, and for many farmers, fox hunting represents a centuries-old tradition and valid means of pest control.

The Countryside Alliance, formed in response to the proposed ban on fox hunting, spearheaded a demonstration in which 400,000 people marched through London, demanding that the government stay out of rural affairs.

Counter demonstrations by animal rights groups followed, with opponents to the “sport” claiming fox hunting was outdated and barbaric.

In 2004, fox hunting was banned in England and Wales. Hunts now claim to follow artificial trails, but, according to the League Against Cruel Sports, the law is often flouted, and many foxes are still killed on hunts.

Wanna join the mile-high club for Valentine’s Day? Hire your own private jet for sexy times

Check out these excuses for England’s Euro exit

Video: Wannabe thief beaten up by women at cashpoint in south London after trying to snatch their cash