Bahrain security forces have stormed an encampment of protesters, killing at least three people and injuring more than 200.

The charge occurred in the dead of the night on Thursday at the landmark city circle in Manama, the Pearl Roundabout.

The police’s heavy-handedness has drawn condemnation across the world, including from human rights advocates.

Witnesses speak of a blunt show of force, with forces firing pellets, rubber bullets and tear gas to force protesters out of the square.

CNN has reported about one 15-year-old boy who said he and others were sleeping when police swooped. The boy had buckshot wounds to his arm and abdomen.

A reporter was also attacked while he was describing the melee. He said the security forces weren’t “screwing around.”

“They must also carry out a full, impartial investigation into the force used this morning against peaceful protesters, including families with children, and whether the use of deadly force was justified.

“If not, those who gave the orders and used excessive force must be brought to justice.”

The kicking off of protests in Bahrain comes after a surge of dissent in the Middle East, beginning with  revolt in Tunisia and most recently in Egypt. Both toppled their longtime autocrats.

The tiny island is strategically critical to America, which houses the headquarters of the US Navy’s Fifth Fleet. 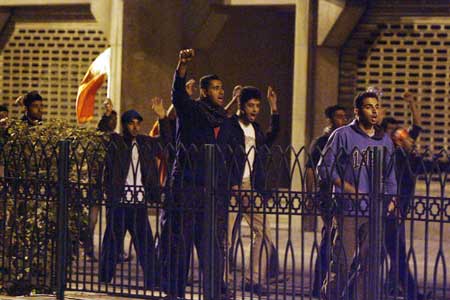 Bahrain authorities defended the handling of protesters, saying they used a minimum of force and that their forces suffered casualties in confrontations with demonstrators.

They said their forces had discovered firearms, knives and Hezbollah flags among the protesters.

Bahrain is ruled by a Sunni Muslim royal family, but two-thirds of the population are Shiites. In recent years, younger Shiites have staged violent protests to complain about discrimination, unemployment and corruption, and many Shiites say the country’s constitution has done little to improve their condition.

The protests in Bahrain started Sunday. They intensified earlier this week after two demonstrators were killed by security forces.

On Wednesday, Bahrain’s Interior Ministry had said those involved in two deaths during previous protests had been placed in custody.

“We express our regret over those who died or were injured in the latest incidents and extend our sincere condolences to their families and to the people of Bahrain,” according to a statement on the ministry’s website.

After that, protesters had largely been left alone by police until the recent crackdown.

More than 3000 people had laid out blankets and pitched tents in protest, but that peaceful reality changed dramatically overnight.

As the protesters dissipated, convoys of more than 50 military armoured personnel carriers each armed with machine guns drove into the area. The convoys included trucks carrying razor wire.

Even at 8am – more than five hours after the crackdown started – the sound of tear gas canisters could be still be heard.

“Public security forces carried out this morning the evacuation of the crowd and the protesters from Pearl Square after exhausting all opportunities for dialogue with them, some of them have responded and left quietly, while others refused to comply with the law, which called to intervene in order to disperse them.”

Bahrain’s armed forces also released a statement about the issue.

“The armed forces of Bahrain calls on all citizens to distance themselves from gatherings in vital areas in the capital because this will have a negative impact on traffic and will create fear and shock in the area, and will result in a traffic crisis which will disrupt the daily life of the citizens and endanger their personal interest,” the statement said.

The emergency treatment room at Salamaniya hospital in Manama, was chaotic.

Casualties poured in with head trauma, or suffering with bloody wounds in the head and chest. 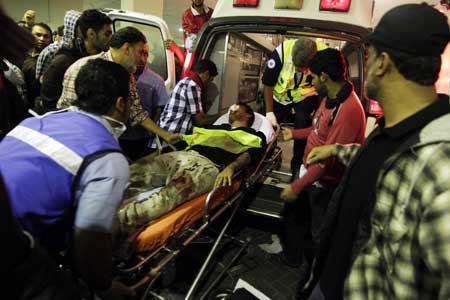 An ABC reporter was attacked while he was reporting from the scene, via his phone. In the midst of his report, Miguel Marquez could be heard shouting on the audiotape, “Journalist! Journalist! No! No!” Heavy thuds and the sounds of police yelling could also be heard.

After several minutes, Marquez insisted repeatedly “I’m going! I’m going!” and called out for co-workers. Finally, he returned to the audio line and explained what had just happened. His voice broke as he said, “These people are not screwing around.”

The U.S. Embassy in Manama put out a statement on the crackdown Thursday.

“We remind American citizens that even demonstrations intended to be peaceful can turn confrontational and possibly escalate into violence,” the statement said. “Please avoid these areas. If you encounter a large public gathering or demonstration, depart the vicinity immediately.”

British Foreign Secretary William Hague said he spoke to the Bahraini foreign minister and stressed the “need for peaceful action to address the concerns of protesters” and “the importance of respect for the right to peaceful protest and for freedom of expression.”

“We also urge all sides to avoid violence and the police to exercise restraint,” Hague said.

Bounce launches ‘Hits From The Pong’