Renowned relics of Roman Britannia rub up against the seals of high society in Georgian Europe. It’s little wonder, then, that everywhere I turn, I charge into a dawdling tourist – the beige brigade of America, animated young Aussies, a few brooding French. But even though it’s impossible to avoid the impression of Bath as one consolidated tourist attraction – a sort of English heritage theme park – it remains a remarkably intriguing and unique pocket of England.

You might assume that after a glance at the Roman Baths and the city’s Georgian splendour, you’ve seen it all. But most enjoyable about a visit here is the little details you pick up in dusty corners; slices of life that slash a very human peephole into the past. Standing at the altar of what was once a vast temple complex accompanying the Great Bath, built between 60-70AD, I hear that the Romans would sacrifice animals atop it and read the future in the creature’s entrails.

These primitive beliefs – consider, too, that Bath’s main draw is only here today because its architects thought the bubbling geothermal springs signified the presence of the goddess Minerva – feel so at odds with an empire advanced enough to control 6.5 million square kilometres of the world at its peak. Seems the Romans were also a spiteful lot. I see a series of curse tablets, dug up by archaeologists from the Sacred Spring. On these sheets of lead, bathers inscribed the names of people they suspected of great crimes such as nicking their bath robe, then tossed them into the water in the hopes that Minerva would wreak bloody vengeance. 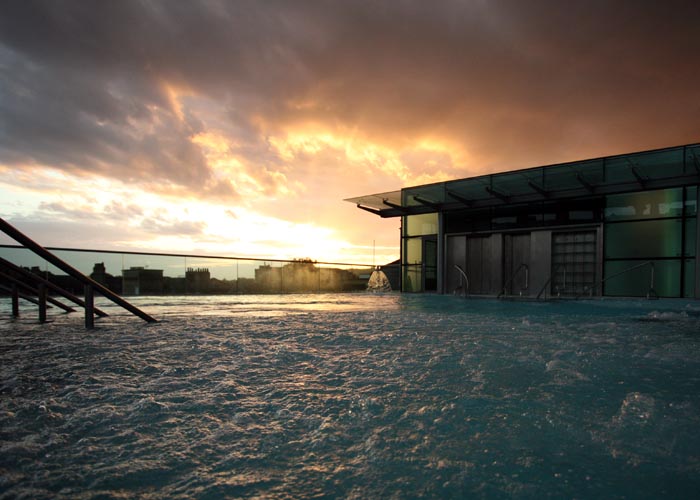 Another tidbit I stumble across is the ‘dog wheel’. The Royal Crescent – voted Britain’s second most picturesque street in the Google Street View Awards, behind The Shambles in York – is home to a great little museum that preserves a Georgian townhouse’s resplendent interiors. In the kitchen, I learn that it was common practice to set small dogs running in a wheel that powered a spit for turning meat over a fire. Our furry friends were forced to work up a sweat in the wheel to do the laundry and churn butter, too. People even bred the ‘turnspit dog’ – a long-bodied pup with short legs – to do the work, though it is now believed to be extinct. The most distasteful element of all this? Well, I certainly don’t fancy spreading dog hairs on my sandwich.

Staring into the bubbling Sacred Spring back at the Roman Baths, there remains an air of the mystic about this place. Bath is the only area in the UK to boast natural geothermal springs, which flow from the ground at a temperature of 45˚C. And no one knows why. The popular theory goes that it is rainwater that fell 10,000 years ago, soaked through the earth’s layers, and was eventually pushed up through the faults of the limestone beneath Bath. When the Thermae Bath Spa was commissioned – a modern bathing complex at the heart of the city where you can soak in the mineral-rich waters – extensive investigations could neither prove nor disprove the theory. It’s a mystery.

Indeed, it is an unusually blessed city. As well as its waters (which were sipped in the 18th century in the belief they cured illnesses; you can still taste it today, though it is, frankly, rank), the Bath Stone from which its buildings are carved – a type of limestone comprising fragments of calcium carbonate – is endemic to the area and utterly striking. ‘Handsome’ seems an archaic word to use, but the honey-gold Georgian structures so iconic of this town really are.

In keeping with this much-mined historical epicentre’s enduring ability to surprise, one of the largest hoards of Roman coins ever found in Britain was uncovered in Bath in March. About 30,000 silver coins from the third century were turned up – in a city that has been pored over by experts for decades.

And maybe that’s the thrall of Bath – a sense that it still teems with untold stories. Explore it and you’ll no doubt find your own.