Düsseldorf’s Carnival is a spectacle of costumes, drag queens, boozing and craziness. TNT’S Alison Grinter got into the spirit.

“Which was to the gay race?” slurs a young man wearing a silly hat. Like us, he is following the crowd, desperate to catch “Tuntenlauf”, an event which sees grown men race each other while dressed as women – no mean feat in six-inch heels.

Sadly we don’t catch the race, but we do see the parade showcasing the most elaborately attired drag queens I’ve ever seen. Flashy and fabulous, Tuntenlauf is a recent addition to Düsseldorf Carnival and has become one of its most popular draws. 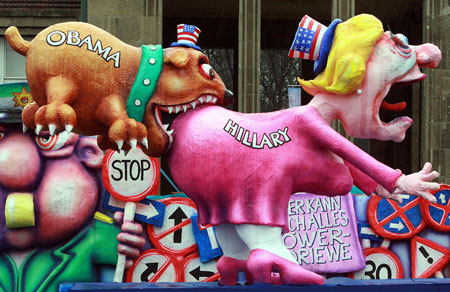 Dating back to 1825, Carnival is centred around Königsallee, Düsseldorf’s famous shopping boulevard, affectionately known as ‘Ko’ to the locals. It kicks off on November 11 with a jester called Hoppeditz scolding the city’s rulers in front of the town hall, and culminates with the immense, colourful Rosenmontag Parade in February the following year. In between are more than 300 carnival shindigs.

We are here for Carnival Saturday and Sunday, which is essentially Carnival’s last hurrah and an excuse for Düsseldorfers to dress up, hit the streets and make merry like there’s no tomorrow.

The atmosphere is incredible. There are people dancing on chairs, spontaneous outbreaks of conga lines, and singalongs to bad Europop – and all in the same restaurant! Most of the bonhomie is happening outside though; a group of uni students give us tiny bottles of luridly coloured alco-pops that we happily skoll to get into the spirit.

Somehow I can’t imagine inscrutable Berliners letting their hair down like this.

“It is because we are near the Netherlands,” explains Stephanie Herbich from the local tourist board. “Everyone here is more open-minded.” 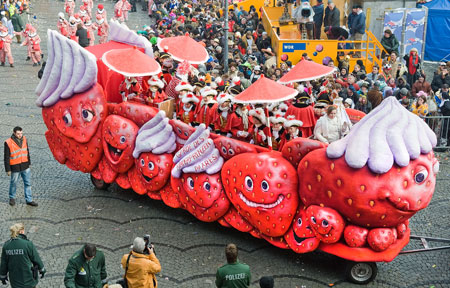 The atmosphere is infectious, but to fully enjoy Düsseldorf Carnival make sure you…

Düsselfdorfers are serious party animals and have a raft of local beers and liqueurs to match their appetite. During Carnival there are scores of bars along ‘Ko’ which you can nip in and out of to imbibe the local Altbier (old beer), such as Füchschen, Schumacher, Schlüssel and Uerige. Knock back a few shots of Killepitsch, a local herb-based liquor that goes down a treat on freezing cold nights.

Everybody, and I mean everybody, dresses up for Carnival Sunday – mums, dads, kids, teenagers, grandpas, grandmas. The costumes aren’t dictated by a particular theme – we saw people dressed as convicts, angels, animals – anything goes, basically. Dress warmly though, because it gets cold here in the winter.

But don’t throw up…

Like the rest of Germany, Düsseldorf’s cuisine is characterised by the usual meaty stodge of bratwurst, schnitzels and slabs of pork served with potatoes – perfect for lining your stomach. A couple of local specialities worth seeking out are delicious smoked herring and Rhenish Sauerbraten: pickled roast beef with stewed apple.

Altstadt
Described as the “world’s biggest bar”, Düsseldorf’s old city is a warren of laneways full of bars and clubs, perfect for guzzling the city’s local Altbier.

TV Tower
Get a bird’s eye view of the city from its 168m-high viewing deck, including Frank Gehry’s stylish buildings, and the revamped harbour, the MedienHafen.

Art
The K20 on Kunstsammlung am Grabbeplatz is a must-see for its collection of works by Picasso, Matisse, Joseph Beuys and Paul Klee, and check out K21 on Kunstsammlung im Standehaus for contemporary art.

Japanese Dusseldorf
Known as Nippon on the Rhine, Düsseldorf has the highest number of Japanese inhabitants in Europe and lots of cultural stuff to match, including a Japanese Garden in Nordpark, a Buddhist temple (at Brüggener Weg) and sushi restaurants galore.

WHEN TO GO: Carnival starts on  November 11 and finishes on Ash Wednesday the following year.
GETTING THERE: Air Berlin (airberlin.com) flies to Düsseldorf direct from Stansted, from £48 return. Düsseldorf Airport is only 7km from the city centre.
GETTING AROUND: U-Bahn trains, trams and buses provide excellent transport links. Daily travelcards cost around €4.70, or consider a Düsseldorf Welcome Card, which allows use of all public transport and free or reduced entry to many of the city’s sights. Prices start at €9 for 24 hours.
VISAS: South Africans will need a Schengen Visa.
CURRENCY: 1 GBP = 1.21 EUR.
LANGUAGE: German, but English is widely spoken.
GOING OUT: Beers range from €2-€4.
ACCOMMODATION: Dorm rooms cost from £12 per night, private rooms from £20.
GET MORE INFO AT: duesseldorf-tourismus.de

First Australian gay couple to be married in New Zealand