South America is an explosion of colour and chaos, with vibrant cities that never sleep, tropical coastlines and wild jungle terrain. Every country has its own flavour – and the dance of choice will tell you all. From sexy samba in Brazil, to sassy salsa in Colombia to fiery tango in Argentina, this is a continent that really knows how to move and we guarantee your hips will be shaking in no time.

The continent bursts with passion: religion turns magical as pre-colonial rituals merge with Catholicism and the Latin spirit burns bright no matter what. Nowhere else in the world does an airport delay turn into a full-flung fiesta – believe us, in no time you will have made friends with your pilot’s grandmother, grandfather, great-aunts (all seven) and even their chickens who will be joining you on board. Not to mention you will have mastered salsa and feasted on fresh empanadas that mysteriously emerged from behind the service desks… at least that’s what happened to us.

Latin cities will feel familiar to anyone who has spent time in Europe, with white-washed colonial buildings surrounding buzzing green plazas. Except here, rather than rushing to work, the entire population, it seems, meet each afternoon to chat over street food and kick back under the shade of the tropical trees. In urbane Buenos Aires you can feast on steak to your heart’s content (or until it gives out).

Just across the borderis wind-battered Bolivia where the Andes mountains stretch from Peru and cliff-top towns make your head spin in the thin air – not to mention what the views can do. And then there are the non-stop parties of Rio where bronzed babes and muscle-men sun themselves on the city shores under the watchful eye of Christ the Redeemer. There’s something for everyone and the captivating mix of old and new, of European and pre-colonial, will pose endless questions that everyone is happy to answer along the way. Most people start their trip in Argentina and travel up by coach or plane depending on how much time they have. But as you will quickly learn, ticking clocks are irrelevant here and all you will have the power to do is sit back and let the adventure come to you. It won’t take long.

Argentines, or more specifically ‘Portenos’ (people from Buenos Aires), like to think of their country as the most European of the bunch. Their neighbours often joke that Argentina has a chip on its shoulder, but the truth is both are right: the country has a unique culture that stems from close European alliances combined with Latin passion. There is beautiful wilderness in Argentina when you get down to the pristine and untouched icebergs of Patagonia and then there’s also pulsing nightlife and culture with parties that rival Ibiza’s. And don’t forget that steak…

Recoleta Cemetery in Buenos Aires will give you a sense of the city’s old-style pomp and grandeur. Although this graveyard of the rich and famous is also home to hundreds of cats who are left to freely roam the graves. The glitzy clubs in Palermo and the arty street markets in San Telmo will give you a sense of the city’s split personality, and then for some true celebration, head to Maradona’s hometown. Nowhere could a footballer be more adored. There’s more partying to be done in the city of Rosario, where the women are said to be the most beautiful in Argentina. And if you continue further West you’ll get to wine land, where you can cycle through vineyards and sample the fine Argentine Malbecs as you go. Ultimate adventure can be found in the south of the country where glaciers make up Patagonia. It’s also the furthest point on earth before you reach the Antarctic, and the surreal launchpad town of Ushuaia truly feels like the final frontier. 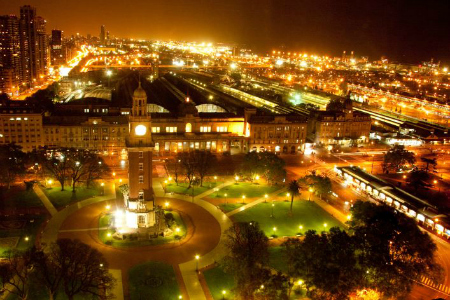 You can’t utter the name ‘Argentina’ without someone piping up about the steak – and it really is that good (and cheap). In Buenos Aires, La Cabrera is the tourist bench mark and your juicy slabs will come served with a mouthwatering selection of sides. Family-run ‘parillas’ or grills are also abundant and they’re good for some authentic flavours. Empanadas, which are pastries stuffed with meat or cheese and sold in street stalls or small cafes, are also tongue-ticklingly good.

Capital Buenos Aires is party central with nights that don’t get started until 2am. Tourist bars are located in Palermo and the bigger clubs can be found along the water in Puerto Madero. San Telmo has an array of smaller pubs and arty watering holes that will take you off the beaten track. Weekly Bomba del Tiempo is BA’s biggest party; it combines African drumming with folk beats in a huge warehouse turned theatre.

Buenos Aires is full of ‘boutique hostels’ and, though prices aren’t as cheap as they used to be, you can still do better than a dorm room for a decent price. Milhouse is legendary in the city for its sociable guests and all-night parties. Further afield, you can stay in stunning ranches in ‘guacho’ (Argentine cowboy) territory such as El Bordo de las Lanzas in Salta.

Read the rest of our guide to South America in our mag – find out where to pick up your nearest copy here. To read our eMag online, click here.

Keen to experience the thrill of South America first hand? Why not hop over to TNT Tour Search for some incredible deals?