During drug kingpin Pablo Escobar’s reign from the Eighties to the early-Nineties, visiting Colombia was about as safe as backpacking through the Democratic Republic of the Congo. But times have changed.

On the 20th anniversary of El Doctor’s death – and amidst a slightly more favourable security situation – I was curious to find out how far Colombia has come. Naturally, it made sense to begin my month-long visit in what was once considered to be the world’s most dangerous city – Medellín. 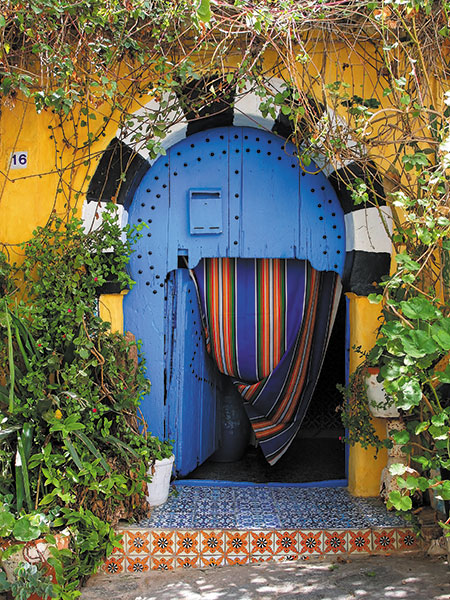 Stepping off the bus in Colombia’s second- largest city, I can’t deny I am a little apprehensive about being in Colombia. But my fears are short-lived. Since Escobar was gunned down by police on the roof of a middle-class suburb here in 1993, Medellín has slowly and quietly been getting on with things.

A metro was completed in the mid-Nineties, and a decade later saw the implementation of a gondola system connecting the city’s favelas with the Central Business District – taking the trip up to the former no-go barrio of Santo Domingo for a beer at a local bar is an eye-opening way to spend an afternoon.

Thanks to a massive art contribution by famous Colombian sculptor and local resident Fernando Botero, the city’s Museo de Antioquia is well worth a look-in, and the cosmopolitan Zona Rosa district is the ultimate party destination. 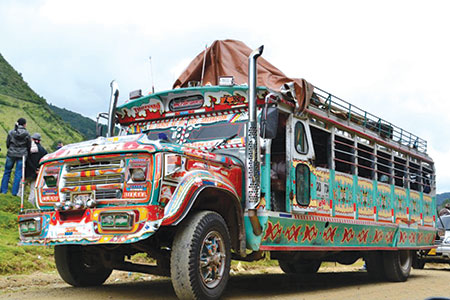 Keen to get more of an insight into the days of the Medellín Cartel, I sign up for the official Pablo Escobar Tour (£35), which offers a rare chance to meet Pablo’s brother Roberto. Pulling up at the 66-year-old’s house, our guide Natalia casually invites us in for “some coke”. The joke is on us as we sip Coca-Cola, listening to Roberto – who did 14 years in jail for acting as the cartel’s accountant – regale us with the story of how he and Pablo escaped resort-like prison La Catedral in 1992.

But it is difficult to swallow Roberto’s claim that his younger brother – who orchestrated the deaths of more than 3500 journalists, politicians, police and other civilians – was a “kind, gentle, man”. Posing for a photo with the diminutive Paisa (a nickname for people of the region), left partly deaf and blind by an envelope bomb, is kind of unsettling. Still not sure why I smiled.

While the days of the Medellín Cartel are over, it’s estimated Colombia still accounts for up to 60 per cent of the global production of cocaine, and the bacrim (narco-paramilitary gangs) still operate across the country. The UK government currently advises against visiting rural areas bordering Ecuador, Panama, Venezuela and the famous salsa city of Cali, but I personally have no dramas busing up through the latter region from Ecuador. Street crime is still a problem in the big cities, yet I feel more or less comfortable exploring Medellín by day.

The capital Bogotá, my next stop, seems a bit sketchier though, and I move on after checking out the fantastic free Museo Botero and photographing the street art in the funky La Candelaria district. 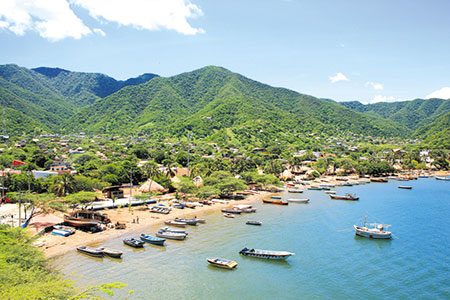 After a week of city life I’m itching to get out into the countryside. First stop: Villa de Leyva. Arriving in this whitewashed colonial village around 150km north of Bogotá is like stepping into a Gabriel Garciá Márquez novel (the protagonist in the 86-year-old Colombian author’s iconic love story, Love In The Time Of Cholera, spends part of his life here).

I inadvertently arrive during the Fiesta de la Virgen, which see hundreds of caballeros converge to prance through the cobblestoned streets on their fillies – a sight I’ll never forget. A world away from the city bustle, this colonial time warp town is the perfect place to wind down for a few days, gorging on café con leche and cake. I meet some Argentinians who’d come especially to forage for magic mushrooms, but alas, they come up empty-handed. 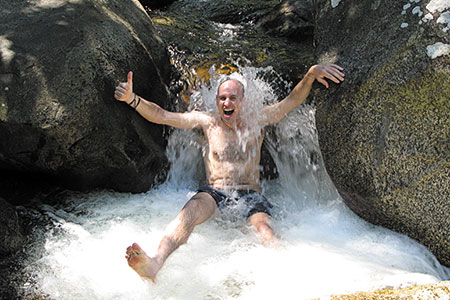 Escobar encounters and cake scoffing aside, my top priority in Colombia is tackling the famous Ciudad Perdida (Spanish for Lost City) trek. To warm up, I make a stop in San Gil – Colombia’s adventure capital. Roughly 300km north of Bogota, San Gil is the go-to town for class five white-water rafting on the Rio Suarez (£30 well spent). There’s canyoning, horse riding, bungee jumping and paragliding on offer here too, but the latter is more scenic in Medellín, which is rimmed by forested mountains.

If you really want to challenge yourself, it’s all about the Lost City. Discovered in 1972, the pre-Inca ruins located on the Sierra Nevada de Santa Marta near Colombia’s Caribbean coast consist of more than 100 terraces and several circular plazas carved into the mountainside, linked by a network of emerald green moss-covered stone steps. For many years, guerrilla groups controlled this region – the National Liberation Army (ELN) kidnapped a troop of hikers in 2003 – but the Colombian military now occupy several bases in the area, which has improved safety for tourists. 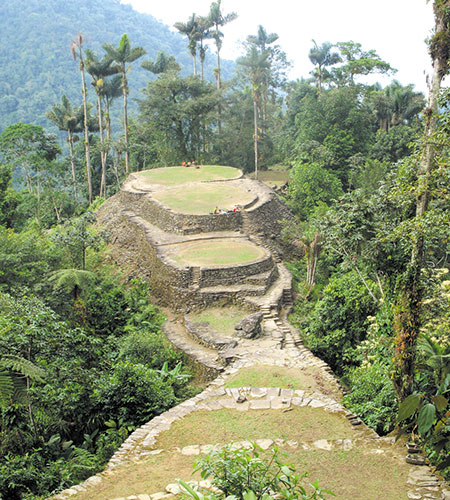 Only accessible by foot, Ciudad Perdida is reached via a 50km jungle loop. You can choose to tackle the trek in four, five or six days (expect to pay around £200, including food and hammock accommodation), but it’s totally do-able in four. And what a hike – when I bend down to take off my shoes at the first water crossing, my guide Miguel cackles with laughter.

He explains it is one of at least 20 streams – some chest-deep – we’ll have to navigate throughout the punishing journey. In short, we are perpetually soaked. Fortunately, a donkey carries our meagre food rations, because my day pack – containing only a dry change of clothes to sleep in, heavy-duty mosquito repellent and a camera that doesn’t spend much time out of its dry bag – feels like it weighs a ton.

Completing the trek is a tough slog, but worth every minute. Unlike the crowded ruins of Peru’s Machu Picchu or Mexico’s Chichen Itza, you’ll be lucky to see another hiking group at Ciudad Perdida – it feels like you’re the first gringo on the scene since the city was thought to have been abandoned during the Spanish conquest.

And while it lacks the grandeur of other famous ruins, Ciudad Perdida’s achingly beautiful jungle setting more than makes up for it. It’s said the primitive communities you’ll pass en route have always known about the ruins and kept it to themselves, and I can’t help but feel a little guilty that their secret is out. 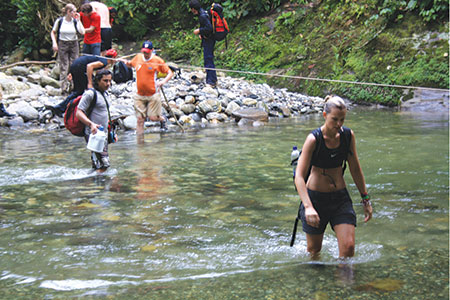 Following the gruelling trek, I can’t wait to hit the beach. Fortunately, Colombia boasts nearly 1700km of coastline, fringed by picture-perfect coconut palms. A few clicks east of Santa Marta, Tayrona National Park is a popular spot to spend a few lazy days sleeping out on a hammock by the beach (be warned: the sandflies take no prisoners), while other travellers rave about the sleepy village of Capurganá near the Panamanian border.

With just a few days remaining on my visa, I only have time to spend a day or two relaxing in the party town of Taganga before heading west to Cartagena de Indias. One of the first sanctuaries of freed African slaves, Cartagena’s residents reflect its amazing diversity – inside the walled Old Town, street vendors proffer ice-cold watermelon slices while bars blast a mix of salsa, reggae and Afrobeats into the night. The smell of caldero (fish cooked over charcoal) and carimanolas (yucca root fritters stuffed with beef) permeates the streets, and colonial buildings painted in a riot of tropical brights provide photo opportunities at every turn. 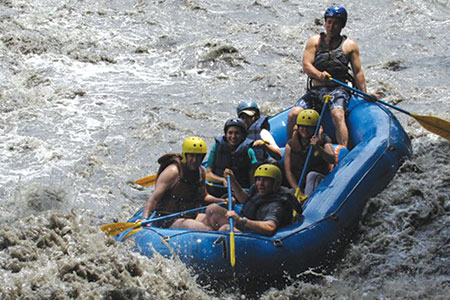 Still a thriving port after five centuries in operation, Cartagena is the gateway to Central America. Thanks to a near-impenetrable swathe of swampland called the Darién Gap, the border between Colombia and Panama is inaccessible by road. Probably because of this, flights are always really expensive, so most travellers choose to make the journey by sea.

Sailing isn’t much cheaper (expect to pay around £330), but it’s worth it to spend three days of the typical five-day voyage cruising the stunning San Blas Islands, off Panama’s remote east coast. Captains tout for business in the hostels of Getsemani, just outside Cartagena’s historic centre, but it pays to do your research – hostel Mamallena in Cartagena (mamallena.com) and Luna’s Castle in Panama City have good info on their websites, as there are some oddball seamen out there. 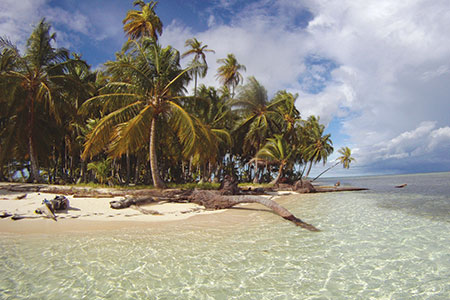 Autonomously controlled by Panama’s Kuna Indians – who’ll catch and cook you a lobster for around £5 – the idyllic San Blas are flanked by the most paradisiacal turquoise water I’ve ever seen. Following the arduous 40-hour open ocean crossing from Cartagena, during which we nearly collide with a freighter, run out of drinking water and all but one of us hurl our guts up as the yacht pitches and rolls through a hectic storm, coasting in the sheltered San Blas waters is a pretty sweet way to end my trip. Colombia might have a bit of a bad rep, but I’d go back for sure.

Getting there Fly from London Heathrow to Bogota via Paris with Air France from £989 return.

When to go: Colombia is a year-round travel destination, but the dry seasons from December-March and July-August are better suited to hiking. Medellín is famed for its eternal-spring temperatures, and the humidity in Cartagena is much more bearable from November-April.

Where to stay: Expect to pay around £8 for a dorm bed throughout Colombia. Try Medellin’s Casa Kiwi with dorm beds from £6.50pppn.