When it comes to dominating a sport, Aussie Boyd Exell is the equivalent of Jordan, Phelps, Pele, Bolt and Armstrong (without the drugs) in the world of extreme carriage driving, a discipline combining the grace and control of a royal procession with the speed, skill and courage of a wild west chase scene.

For the past four years Exell’s won his holy grails, the FEI World Cup Driving Final and the prestigious CHIO at Aachen, Germany.

He’d won them multiple times before that. He’s also the only Australian to win a gold medal in any event at the World Equestrian Games, where all equine events come to compete at the top level.

To go on listing his achievements would be an exercise in repetition, and to say he excels would be a rubbish play on words and an understatement – suffice to say, the bloke from Bega, NSW, is bloody good at it.

To watch his command at the reins of four powerful beasts, controlling all four with one hand, also does an injustice to his sport – he makes it look so easy.

Predictably, he puts a lot of his success down to the horses.“Each one of them is like a V8 engine, which you must control,” Exell explains.

“The front two have to be bold and brave and intelligent and sensitive. The back two have to be powerful and strong, and followers – soldiers rather than lieutenants. 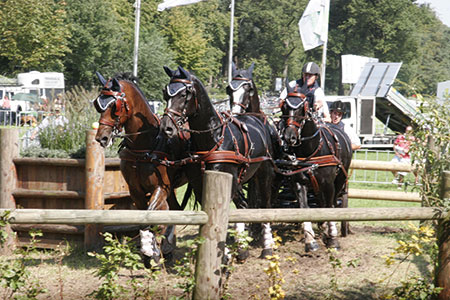 They have to cope with the weight of our competition carriage, which is three-quarters of a tonne.”There’s more to it than Exell lets on.

He explains that when he asks his front two horses to go left, the back two must take a few steps in the opposite direction before following the leaders’ path.

It’s a marionette-like dance with massive four-legged puppets, and they have minds of their own.Boyd will be among 10 of the globe’s top drivers who will compete as part of the London International Horse Show on December 19 and 20.

The event is a rock ‘n’ roll version of the sport established competitively as a three-day event in 1972 by Prince Philip.

“He worked with the FEI (international equestrian federation) to design the rules for the sport, and it’s taken off from there,” Exell says.

“It’s huge in Germany, Hungary, Romania, and all around Europe.” 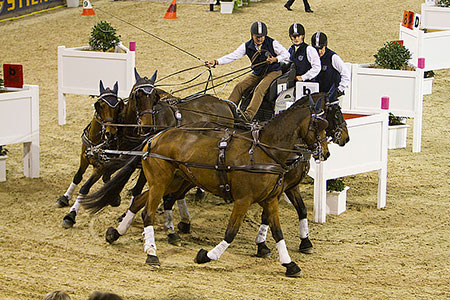 Carriage driving, or four-in-hand, in its full form is much like the equestrian all-round, or eventing, with dressage, cross country and an obstacle course instead of show jumping.

“The dressage is all about the training and skill and movement of the horses,” Boyd says.

“The second day is all about the rough and tumble and the speed over a 20km course.

And the third day is the cone driving, which makes sure the horses are still supple and balanced and controlled after the previous day.

You’ve basically raced them like Formula 1 cars the day before, so it shows their versatility, when they haven’t become wild machines after that.”

Last year at the Olympia, carriage driving was a test event, but this year it’s the sixth round of the FEI World Cup series, which Exell is leading.

The format of this winter indoor series is a trumped up version of the third day’s course, run over several rounds. After the eight rounds around Europe, the top eight will make February’s final in Bordeaux, France.

Exell will guide his four horses around a course of gates with speed, reaching up to 30mph in a confined space, and accuracy, aiming to avoid the five-second penalties given every time an element is bumped by horse or carriage.“

To win, you basically need to go around clean, and when you’ve got four horses in tight areas at galloping speed, there’s nothing guaranteed,” Exell says. “It’s a bit like rally car driving. You have to be clean but you have to push it.”

For the Olympia competition, Exell’s crack team will include 22-year-old Bill and Junior, and the youngsters, 19-year-old Spitfire and Lucky. “Bill’s my secret weapon,” he says.

“When I make a mistake he just assumes I didn’t mean it and goes the other way.” 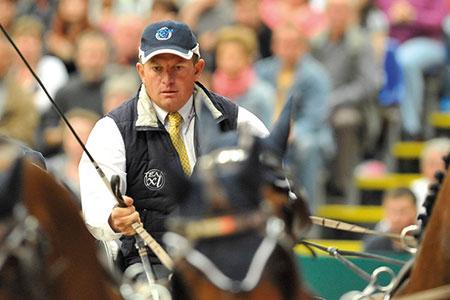 He says it helps that his horses enjoy the spectacle, as the London event will be a spectacular that is not only for purists, but entices new fans to equestrian sports.

“It’s a great showcase for the sport,” Exell says.

“The crowd is pumping, the laser lights are flashing and then there’s the thundering hooves. The atmosphere is electric.

”It’s the closest thing to a home event Leicester-based Exell gets, having been in the UK since 1993 when he had to choose between a party or a round-the-world ticket as his 21st birthday present.

“I took the ticket but only made it to the second stop, and the rest of it was void,” he says.

He saw a chance here to further his equestrian ambitions that was too good to pass up.

“I love the Australian lifestyle, but I’d always loved the idea of the hunting prints I’d only seen on walls in Australia,” he says.

“That spurred the dream on – I loved the countryside here and the traditions and culture.

”He hardly comes from the elite ranks you’d expect of a royal-endorsed sport, with a school teacher mum and civil engineer dad.

“I haven’t taken the expected path, my siblings include a programmer, architect and an accountant,” he says.

“But I’m glad I did.”It’s a journey which began at age eight when his mother’s friend introduced him to carthorses.

“I was devastated at the thought of carthorses,” he says.

“But in two days my concentration was on the horses and nothing else.”

At 16, he won his first major title, the Australian pairs championships (two horse carriages) and he’s been a world-beater since.

At the last World Cup event in Geneva, Exell finished with a total time, after two runs, that was 35 seconds ahead of the runner-up, with no penalties. Look out London. 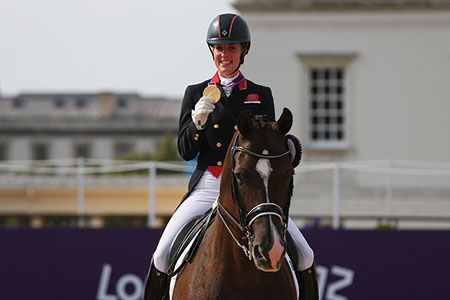 The centrepieces of the London International Horse Show will undoubtedly be the FEI World Cup events for dressage, jumping and extreme carriage driving, but there’s plenty more equine mastery to be seen.

On the first night of the driving competition, from 6.45pm December 19, the Team GB Olympic equestrian medalists will parade in front of fans after the Kennel Club’s ABC Agility Stakes Final (that’s clever dogs racing).

The Shetland Pony Grand National will also be run.

Eurosport and the BBC will be broadcasting selected sessions throughout the week.