Brazilian substitute Henrique slammed home the winner in the second half of extra time after Berisha, off to the Melbourne Victory next season, found the equaliser with four minutes on the clock.

It’s heartbreak again for the Western Sydney Wanderers though, who in their second season in the competition end the season as grand final losers.

Tony Popovic’s side absorbed pressure throughout the opening stanza, comfortable without the ball and constantly pressing and then often looking dangerous when they got their chance.

They took a deserved lead through defender Matthew Spiranovic, who beat his man to the front post from a corner and headed with precision into the top corner (below). 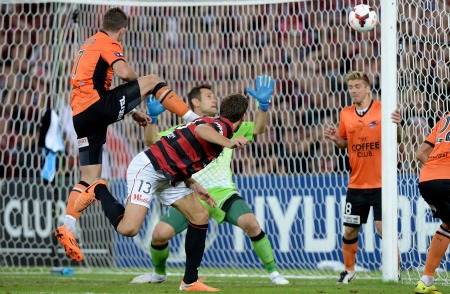 But they would have known that the Roar isn’t a side that gives up.

While in Brisbane’s Suncorp Stadium in front of 50,000 fans, the Wanderers’ spirited travelling support made it seem like their home game.

Those in orange had the place pumping though as the Roar struck late, as is so often the case. In nine A-League seasons the Roar have won three grand finals, and in all of them never scored before the 84th minute, and always coming from behind to win.

Having lost their rock in the air at the back, captain Nikolai Toppor-Stanley, to a knee injury Berisha took advantage to nod on a pin-point cross from A-League player of the year Tomas Broich to take the match to extra time.

The best chance of the first half of the additional period fell to Labinot Haliti, who came on for former Asian player of the year Shinji Ono, but he could only find the keeper’s gloves.

Then arrived super-sub Henrique, the Brazilian who came off the bench in the 2011 grand final to snatch victory from Central Coast Mariners, did it again.

The Wanderers now switch their focus to the Asian Champions League.

How Champions Overcome Their Biggest Insecurities

Top five things to do in London this weekend!