You might not like the idea of brawny men throwing you face-first into the mat, or jumping on your back and trying to rip your arm out of its socket. But, fortunately, it’s possible to get the fitness benefits of mixed martial arts (MMA – for the fans) without incurring grievous bodily harm.

At the Titan gym in north London, about a dozen fighters are warming up for their training session. They’re all shapes and sizes. There are a couple of monsters, no doubt, brick shithouses with calves that look set to burst the skin. Some of these brutes must weigh about 120kgs, but they’re actually outnumbered by leaner, long-limbed fighters, who are lighter on their feet and don’t necessarily look like they were born and raised in a weights room. 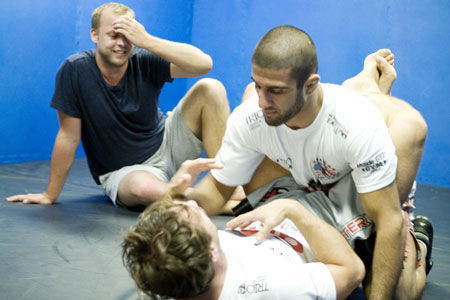 The backgrounds of MMA fighters are equally diverse – quite a few come from a Brazilian jiu-jitsu background, but others started doing karate or kung fu before adapting their styles for the rough and tumble of cage-fighting. Others, like Brad Pickett, one of the growing number of British fighters in the Ultimate Fighting Championship, come from a boxing background.

“I played a lot of sports,” Pickett says as the other fighters in the gym continue their routine. “I played a lot of football but kept getting injured. And then I was a boxer, but with MMA, you have to be able to do it all. So even though I used to box, now I like the wrestling and the different holds as well.”

Pickett, 33, stands 5’6 and fights at 60-odd-kgs, making him a bantamweight, a division in which he is ranked seventh in the world. Pickett might be a little fella, but his nickname ‘One Punch’ Pickett, suggests he packs a wallop. And, this weekend in Birmingham, he’ll be fighting Brazilian Renan Barão in one of the main events at UFC 138. We begin our Cage-fighting 101 with a warm-up – squats, sit-ups and push-ups, 10 at a time, 20 at a time and then 30 at a time – before going through some basic submission holds, for which Pickett brings in Sirwan, another fighter who he refers to as his ‘guinea pig’. There’s the rear chokehold, which is like an old-school sleeper-hold but harder to break out of, and the golden triangle, also like a sleeper-hold but executed with your legs while on your back. 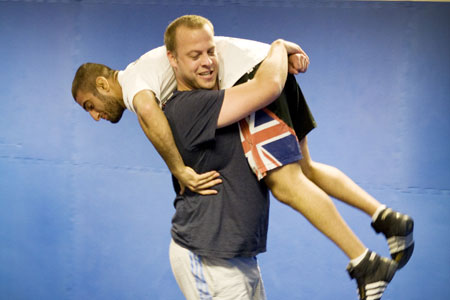 Pickett then explains ‘the shot’ – one fighter lunges to grab an opponent – and ‘the sprawl’ – the other fighter darts backwards and flattens themselves on the ground to evade the grapple, before spinging back to their feet. After some work on the pads – working jabs, hooks and uppercuts – we combine it all on the heavy bag. Pickett whistles every 20 seconds or so, meaning I have to sprawl, flattening myself on the ground before jumping up and hammering into the bag again. After a three-minute round – UFC rounds go for five minutes – I am absolutely knackered.

I can barely get back to my feet after my final sprawl and my punches are now more like insipid, limp-armed slaps.

It’s an incredible workout, combining all the strength and conditioning of a gym session with an extensive cardio regime. There is even an invitation to step into the Octagon with one of the cage-fighters. Presumably, that would be less like fun and more like pain and ritual humilation. Maybe next time.

Glastonbury breaking with tradition and considering a move