You can’t ask anyone at TNT to commit to a favourite state, but there’s definitely a soft spot in our hearts for the great north eastern state of Queensland. From the rainforest to the reef, there is plenty to keep any backpacker occupied for months.

Tourism Tropical North Queensland is currently running a Youth Drive Campaign, and they’ve sent a bunch of Instagrammers roadtrippin’ around the state showcasing the finest on offer. I was invited to come along and chip in my two cents about the region and some of the best activities around Cairns.

A bright and early start had me yawning as I was shuffled onto a Tigerair flight from Sydney to Cairns. There was plenty to pack into my short four day trip, so getting the most out of each day was very important.

I had barely gotten off the plane and adjusted to the drastic change in climate before being whisked away, gasping against the thick, humid air. Once I caught my breath, I was in a Mighty Camper heading along the Captain Cook Highway towards AJ Hackett Cairns. The sun beat down over the fields surrounding the road – Queensland was in the throes of yet another long drought.

Bungy is one of those activities that just never seems to get old. For me, it’s just cracking, good fun. Executing a flawless swandive off the platform and achieving some significant distance outwards, I hurtled 50m down – though sadly, without the required downwards drive to get my head in the water. It’s exhilarating, hurtling towards the ground before bouncing up and down over a small green pool.

Altogether, it’d been a while since I’d had that much excitement before noon. Before long, I was back in the camper and heading towards Cairns for my last activity of the day: wakeboarding at Cable Ski Cairns. There were no boats involved, but rather a rail high above the water that circles the man-made lake with little clips that drag your rope along.

Wakeboarding was another first for me (thanks Cairns!), but being a decent surfer and snowboarder I thought I’d be sweet. As it happens, it’s a little different. Consequently, I bit it on the first handful of times and got nice and wet. After some pointers from one of the staff I managed to get off the launch pad – only to come off at the first corner, which happened to be the furthest point to have to walk back from…

By the time I was about done my arms were aching, and all those muscles I’d never used before had given up on me. I trundled back to Cairns itself and to my bed at Cairns Central YHA – though not before I took a quick dip in their pool. 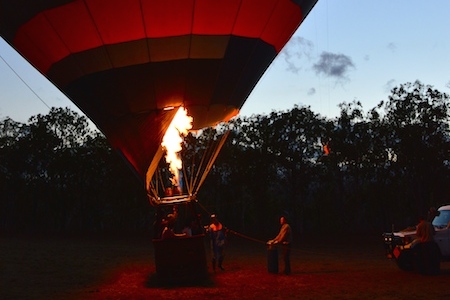 There’s no better start to the day than a 4am wake up call. Wait, there is: a 4am wake up call that leads to a sunrise hot air balloon flight. Raging Thunder proved to be an appropriate name for the company, as we pulled up to the sound of fires roaring and filling the balloons with hot air.

Once we were in the air, the silence was incredible – gliding across forests and houses, hearing the distant barking of dogs – before being interrupted by the blazing fire again. The stillness was unexpected, and the basket hardly moved at all. Across mango trees, schools and caravan parks we soared before touching down in a field. We all took a moment to step inside the inflated balloon and reel at the sheer size of it all.

By the afternoon I was ready for another round of adventure, and Raging Thunder picked me up once again for a spot of white water rafting. Quickly pegged as a travel writer, I was unanimously assigned to Wazza as my river guide. I was immediately uneasy. We followed him towards the river, where our boats were up against the cliff wall waiting for us. In a ‘horse-whisperer’ type moment, we watched as he gently prodded one of the boats, before hurriedly directing us to grab the one behind it.

With a little sabotage from your guides you’re sure to get wet on the Barron River. From deliberately pointing the boat into the bottom of waterfalls and attempting ‘donuts’ from the pressure, to making sure we accidentally head down rapids like ‘the rooster tail’ backwards. They’ve obviously got your safety as priority, but they’ll do what they can to make it more exciting. 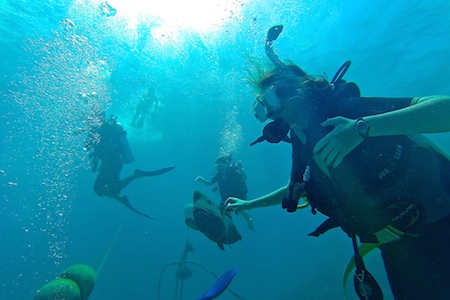 My final activity in Cairns was easily my favourite, and for the region it’s a rite of passage: taking on the Great Barrier Reef with Passions of Paradise. At the Reef Fleet Terminal, there are plenty of companies with whom to take your reef trip, but approaching their vessel I was sure that I was with the right guys.

The 25m high catamaran is a sight to behold, and when arriving at the reef I began to feel like I was born for a life on the sea. Our first dive of the day was shallow at a maximum 8m, and there were times I found myself almost breaching the surface. The variety of sea life here was most impressive. We caught glimpses of clownfish in their anemones, stingrays darting along the sand and even a rare appearance by a solitary turtle.

The second dive is always the hardest – getting back into a soggy wet suit after lunch is rough. Any complaints melted away once we lunged off the boat into the water, only to be met by the dive spot’s resident Maori Wrasse – Wally. Being 12m below the boat, stroking the side of this gigantic, curious fish and looking up to see the looks of envy from snorkellers was immensely satisfying. We finished our day exhausted and promptly crashed out while the sails were hoisted to return to land.

This wasn’t my first time in Cairns, but I felt like I was leaving having found something new. The city itself has changed little since my first visit eight years ago, but the range of activities has positively exploded. As I dozed off on my Tigerair flight back towards Sydney, I couldn’t help thinking that Cairns just might be the adventure capital of Australia.

Check out the results of the Youth Drive Campaign here