Catalonia’s Costa Dorada, Barcelona and beyond

Catalonia considers itself a distinct entity within Spain – a country within a country, and a fiercely independent one at that. And, if you ask the Catalans, many would be more than happy to do without the rest of Spain. Any visitor to this province, which shares a border with France in Spain’s northwest, will hear, likely more than once, the mantra of their proud hosts: “We have the mountains, the ocean, the best food, the best weather – what else do we need?”

And certainly, in Barcelona, the provincial capital, the Catalans have Spain’s sexiest, most attractive city, which lures tourists from around the world every year with the promise of seaside mojitos, endless tapas and all-night partying. There is sophistication too, of course. Barcelona’s upmarket neighbourhood of Born, in the eastern corner of the old city, is among the most fashionable spots to dine. Bistros, delis and coffee shops line the Passeig del Born, drainpipe-thin streets breaking off at jaunty angles, shadowy yet inviting, heavy with the promise of well-kept secrets around each corner.

In the yawning shadow of Born’s sprawling antiques market, lengthened in the failing light, the area’s main thoroughfare fans out at its junction with the Placa Comercial. Diners and drinkers are settling in for the evening.  Indeed, Barcelona is a city for hedonists, for lovers of food, for sun-worshippers, for party animals, for those in search of la vida loca. But there is more to Catalonia than its capital. What lies to the south, along the lush, sunlit expanses of the Costa Dorada?

Vilanova i la Geltrù carved out its niche on the Mediterranean as a fishing port, about 40km south of Barcelona. The fishermen are still there but, these days, in the harbour next to Ribes Roges beach, horsehoe-shaped and rimmed with spindly palms, speedboats and small sailboats outnumber the trawlers. It has become the beach of choice for Barcelona residents keen to get down the coast for an afternoon or a weekend, to get out on the water. They come for the 6km of beaches, for the restaurants, cafes and bars that pockmark the waterfront, their white tablecloths caught, forever flapping gently, in an unremitting sea breeze.

“Your kayak is fast, but it is not so stable,” says Rai, our sandy-haired instructor in a telltale Catalan accent. He has just come back from several weeks kayaking in Mexico and is kitted out to the nines. Standing on the shore in his special kayak wetsuit – known as a ‘skirt’ because of the flap of foam that stretches over the lip of the kayak to make it waterproof – with the Mediterranean lapping at his toes, he runs an eye over my T-shirt and shorts. Plain old cotton, I’m afraid. “You will get wet,” he says, nodding to confirm the statement.

My kayak has barely had its nose christened before Rai is vindicated. The Mediterranean has gentle ripples rather than proper surf, but they prove forceful enough to capsize my kayak, with me in it, in water that is barely knee-deep. Please, bear in mind that kayaks are most vulnerable just as they are getting under way, when they have no speed. Like a bike, they’re more likely to tip if moving slowly. And, like Rai says, my kayak is not so stable. Still, it’s an inauspicious beginning to proceedings.

Fortunately, the second attempt is more successful. I manage to stay upright long enough to survive the meagre shorebreak and soon enough my kayak is scything through the Mediterranean like a Viking longship, the elements bent to my will. Hyperbole aside, the kayak is remarkably zippy, a left-stroke and a right-stroke enough to satisfyingly propel the craft several metres.

Beyond the harbour to the north, the Costa Dorado – the Golden Coast, if you were wondering – curves inland before arcing round and out to sea, the shores rising steeply into hills teeming with greenery. A few kilometres northwest of us, the resort town of Sitges is carved into the bluff like a colourful tattoo. It is, I am informed, “the place to party”. Behind, there is only the impenetrable foliage of a Parc Natural, a mass of jungle obscuring the horizon.

“Ah, you see – you are a good paddler,” Rai says from over my right shoulder, my premature dip already long-forgotten. “Let me show you something. You can paddle forward,” he says, mimicking the standard overarm stroke. “Or you can turn by paddling backward,“ he continues, digging his oar sharply into the water, pushing it away from his body, causing his kayak to pivot neatly in the opposite direction. “And there is one more special paddle you need to know,” he says. Bringing his paddle forward and upwards, Rai covers me in a bucket’s worth of a salty water. “It is called Good Morning.”

Spanish cava ‘flows from the ground’

Cava is Spanish sparkling wine traditionally made using macabeu, parellada or xarel-lo grape varieties indigenous to Catalonia. There are similarities to champagne, although there are subtle differences in acidity and fizziness, as well as variations in flavour and sweetness between individual cavas.

Happily, one other difference is the price, with self-important champagne disproportionately more expensive than its Spanish counterpart. The Penedès, the hilly region just inland from Vilanova, produces about 95 per cent of the world’s cava; in these parts, they say that if you dig a hole, cava will flow out of it. 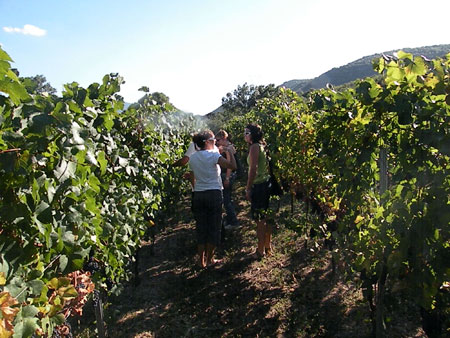 And the vineyards of the Penedès are spectacular, located on the 15th-century estates of wealthy Spanish merchant families who settled in the region, like a kind of unofficial, rural aristocracy. On the estate of Caves Torreblanca, rows of grapes fan out in all directions like a bushy green spider’s web, with the exquisite masia sat square and majestic at the heart of it. The masia is the homestead of any rural operation, influenced heavily by the style of Roman villas, with their expansive courtyards, flat, cool flagstones and high, beamed ceilings. They are like luxury farmhouses with enough room to accommodate an extended family and more.

Montse, who has taken charge of the Torreblanca operation, replacing her father, shows us around the labyrinthine masia, countless doors joining one dining room to another, each more stately and boasting more eye-catching views of the landscape, bathed in sunshine, than the last. In one, Montse pauses.

“We had some Australians and New Zealanders come to stay with us – friends of mine and friends of friends,” she says. “And in this room, they drank a lot of cava.”

Below the house, the cellar is a vast, red-brick vault, barely lit and cool as a cave. Lining each wall, eight-feet-high, are hundreds of thousands of bottles of cava. Two Torreblanca staff are working their way along each row, lifting the bottles by hand, rotating them ever so slightly to shift the sediment and then setting them down gently, the chime of glass on wood almost musical.

Caves Torreblanca is a family-run business – in a region with so many cava producers there is competition, but they are united in their mission to spruik cava to the outside world. Although it is drunk ubiquitously in Spain, elsewhere it is sometimes maligned, unfairly, as cheap Spanish champagne. The cava producers of the Penedès are intent on exploding that stigma.

“You go into this business with your heart, but not your pocket,” Montse says, leading the way back up the stairs, the delicate clink of delicate work sinking in the silence below us. 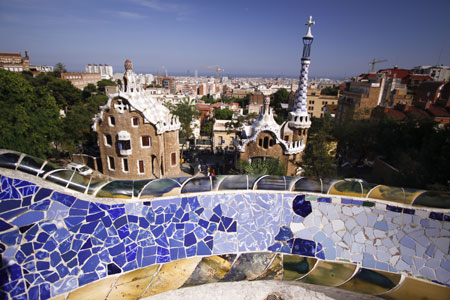 Darkness has fallen in Barcelona but the tables at the pavement cafes are still full to the brim as midnight nears. The sounds of revelry fill the night but slowly, from around the corner, drumming can be heard, growing ever louder until, rounding the final corner on to Passeig del Born, the drummers, at the head of a parade, come into view. Behind them, hundreds more gradually appear, holding lit torches and red-and-yellow striped Catalan flags. I approach a young Spaniard standing on the side of the avenue, clapping and tapping his foot in time with the drums.

“What is this all about?” I ask, assuming his English is better than my Spanish.

“La Diada Nacional de Catalunya,” he replies. “It is the national day of Catalonia.”

As the procession fills the thoroughfare, it is easy to distinguish the locals, who are joining in the chants, from the tourists, who look positively baffled. A diminutive Spanish man takes to a dais and begins an impassioned speech that draws periodic applause from the assembled crowd. Approaching the young Spaniard I spotted earlier, I ask for a brief translation.

“He’s talking about Catalan independence,” he explains. “He is a separatist.”

Of course he is. The Catalans are, after all, a people with everything. Just ask them.

Tom Sturrock travelled with Paddle In Spain, which provides customised travel to various locations in Spain. The company offers a combination of adventure sports, such as kayaking, and sightseeing, including vineyard tours. See paddleinspain.com or call +34 682173225.

When to go: There’s never a bad time, really. But if you want to avoid the crowds, go either side of summer. The average temperature for October is still 21?C, so it’s a good spot for some winter sun.
Getting there: Flights from London to Barcelona leave daily. They depart mostly from Gatwick and Heathrow and are spread across the usual low-cost providers. You can pick up a return flight for anything between £60 and £150 depending on the flexibility of your dates.
Currency: £1 = €1.15
Accommodation: It depends on your budget. If you’re going for a weekend to party, then your best bet is to stay in one of Barcelona’s hostels – you can get
a private room for about £25 a night, less if you share. If you want to stay in a swanky hotel, then both Barcelona and Vilanova are jam-packed with options.
Get more info: paddleinspain.com

Let Me In – review and trailer