Chinese New Year celebrations in London are massive. The biggest outside Asia. 2011 heralds in the Year of the Rabbit and preparations are underway for a spectacular event.

Although Chinese New Year falls on Feb 3, the main celebrations in London will take place on Saturday Feb 6.

The biggest show will take place in Trafalgar Square and last year, 250,000 people turned up to watch the parade and welcoming ceremony.

The square will be transformed with decorations and there will be food stalls set up so you can stuff your face with Chinese delicacies.

Last year, 250,000 people turned up to watch the parade and welcoming ceremony. 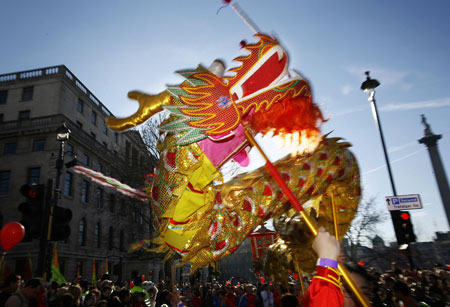 London’s Chinatown will be chocca with food stalls, lion dancers and decorations and it’s free to watch.

The day of Chinese New Year celebration in London will end with a firework display in Leicester Square.

Many museums and art galleries will be hosting Chinese New Year themed events and exhibitions.

The Victoria and Albert (V&A) museum will run a day of free workshops on Jan 30 where you can learn calligraphy and brush painting, Chinese paper-cutting. There will also be a Chinese costume show.

What is Chinese New Year?

Chinese New Year is calculated on the lunar and solar calendars so actual date of varies, but always falls between late January and mid February.

Each year in the Chinese calendar is represented by one of the 12 animals of the Chinese zodiac with 2011 being the Year of the Rabbit.

In the days leading up to the Chinese New Year, people are supposed to clean their houses, repay debts, buy new clothes and have their hair cut. A celebratory feast is held on the eve of the new year.

Travel tips from Lonely Planet guru: New York on a budget and Stockholm in 48 hours

Aussie adventurer at his best