The Christmas holidays are a great excuse to do some travelling. Here are some holiday ideas to suit you whatever your budget or festive wishes (we’ve even got ideas for people who hate Christmas)!

A white Christmas, a la Dickens, is what most of us dream of, but what chance is there of actual snow? In the UK, not much– the Met Office gives a figure of six per cent as the chance of any snow falling on Christmas Day.

Look further afield though to northern Europe or the alpine regions, and you’re guaranteed the crunch of snow under your skis. Top of the list for snow bunnies has to be renting a chalet in the Alps, where you and several mates can ride the slopes all day and sip wine in a whirlpool bath until you turn into a warm prune.

Try Home Away Holiday Rentals (holiday-rentals.co.uk) which offers more than 57,000 properties in France alone. A week’s stay in a self-catering chalet can cost as little as £150 each between 10 people, although you pay more for food, ski pass and equipment hire. 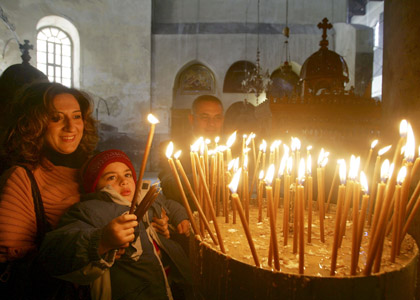 Where better to celebrate the holy week than the Holy Land itself? Bethlehem, the site of the very first Christmas, plays host to visitors from all over the world, holding services for Catholic, Protestant, Greek Orthodox, Ethiopian, Armenian and other Christians.

Even if you’re not religious, it’s a great time to visit, with markets, processions and lots to see and do. Combine your visit with great sights in Israel and Palestine, including Jerusalem, the Dead Sea, diving in Eilat, and Jericho, the oldest city in the world.

Other highlights of the region include Egypt, for the pyramids, desert and scuba diving; Jordan, for the ancient carved city of Petra; or even Lebanon, where its capital, Beirut, has a growing reputation as the party capital of the Middle East. There are a number of trips that take in the highlights of several countries, like an Imaginative Traveller worldwide adventure tour (imaginative-traveller.com).

Catholic South America is another place to get a feel for unusual Christmas traditions. In particular, you’ll want to experience the presepio (‘manger’) which is the most important part of Christmas here, often consisting of life-size or larger tableaux of the Christmas story. Try Intrepid or Kumuka for their small group tours, where you can get the most out of the group experience without feeling too spoon-fed.

Winter sun on a budget

Just want to flop on a beach? You don’t have to go long-haul or spend a fortune to catch some rays. If you’re missing Christmas in the sunshine, do what many Brits do and jump on a plane to guaranteed 30ºC and do some sun lounging.

The Canary Islands are prime low-cost territory and the islands of Tenerife, Gran Canaria and Lanzarote are particular favourites among sun worshippers. Sadly the living’s not as cheap as in pre-Euro days but it’s still a good option for anyone wanting to chill out somewhere hot.

Try booking chartered flights (charterflights.co.uk) to get the best deals on flights, or look for package deals with Thomas Cook.

Another option for cheap sunshine is The Gambia in West Africa. According to Skyscanner, flights through December start from £299 return, although it may be cheaper overall to choose an all-inclusive package from The Gambia Experience (gambia.co.uk) starting from £399pp, for flights, taxes and accommodation.

Christmas in the UK

If there’s lots of the UK you still haven’t explored then you might think of staying closer to home.

Grab a group of mates and go self-catering on an English farm. Try Organic Holidays (organicholidays.co.uk) for back-to-basics cabins, many of which have open fires or wood-burning stoves. Some owners will throw in one of their own organic turkeys to sweeten the deal. Horse riding, hill walking, and country pubs make for excellent rural activities. Otherwise, use the time to enjoy some of the places you haven’t made it to yet.

Also consider heading to the highlands. Door2tour.com does a great seven-day trip (from £429) to Inverness and Fort William with accommodation, meals and transport all included.

Whether you decide to spend Crimbo on the beach or in the snow is up to you, but with all these great options there’s no excuse for moping in London. A word of warning, though – Christmas week books out early, so secure your trip now or take a chance on some unpalatable leftovers.

If you hate Christmas

If you’re feeling resolutely unfestive, there are places you can go to escape Christmas altogether.

Muslim countries are the top pick for this: how about a week in Turkey? Despite the name (which is just begging to be the butt of festive jokes) the country’s population doesn’t mark the day in any way, so visitors can feel free to ignore all traditions.

Likewise, Morocco, with its souks, camel rides and nights in Berber desert tents, could make for an exotic Christmas Day. Picture yourself riding into the desert on a camel or sampling spicy tajines instead of the traditional turkey.

Extremists might even enjoy a trip to Riyadh in Saudi Arabia. It might not have a reputation as the most fun-loving of places but there’s some stunning architecture, the shopping’s good and you’ll certainly escape any of the usual ho ho ho. 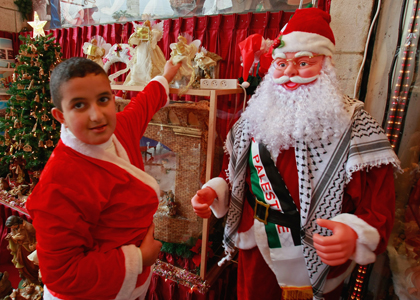 With 102 shopping days left until the big day, you’ve got plenty of time to do your shopping somewhere more exotic than Oxford Street.

Top of our list is New York. Not only is it a good excuse to explore the city and catch a show, you can even end up saving money on presents. Apple items, for example, can cost up to 20 per cent less compared with London prices. The earlier you go, the cheaper the flights but avoid ‘Black Friday’ – the day after Thanksgiving (November 26) – which is the busiest and most stressful shopping day of the year.

The European markets are delightful places to spend a few days munching iced-gingerbread and sipping mulled wine while you shop. Visit Bruges, Paris or any German town for outdoor markets, fir trees and fairy lights. Just be careful you don’t get carried away with the festive air and find yourself loaded down with souvenir lederhosen, snow globes and other junk you didn’t mean to buy.

Hyde Park, Olympia and the Southbank all have their own Euro-style markets from early December. Glasgow’s starts on November 18, in the city’s St Enoch Square, or visit one of the themed events at Rochester (Dicken’s Christmas), Belfast (Christmas Continental) or Caerphilly (Medieval yuletide). See christmasmarkets.com for a full list.

Scotland is the highlight of New Year celebrations in Britain. There are loads of unique Hogmanay customs, notably fire festivals in Burghead, Stonehaven and Falkland, and street parties in Edinburgh and Glasgow.

First Festival Travel (firstfestivaltravel.com/hogmanay.htm) runs a four-day trip that departs December 30 and returns on January 2. The tour takes in the giant Royal Mile Street Party, dancing at the Céilidh, an optional trip to Stirling Castle and the ‘Loony Doon’ swim in the ice-cold Firth River.

The Party Professionals offer a similar tour, while Topdeck offers an array of other New Year’s weekender trips to Amsterdam, Berlin, Krakow, Paris and Prague, all over three days. In theory, it doesn’t matter if you forget ‘auld’ acquaintances as you’ll have made so many new ones.

How to start a day spa business