As the fifth largest city in Croatia, the historic fortress city of Zadar is a great base if you’re heading to one of the summer coastal festivals held in nearby Petrcane.

In recent years, the whole region has fostered a reputation for throbbing, flip-flop-friendly festivals including the likes of Electric Elephant, The Garden Festival, Suncebeat and Stop Making Sense, all of which are based on the enchanting Croatian peninsula. 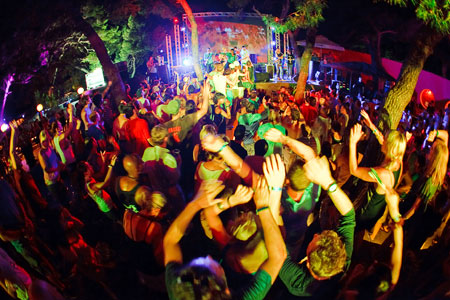 Nightime at the Garden Festival.

With its sleepy, traffic-free streets, delicious seafood and Roman history – a legacy of the city’s original founders – here’s a great formula for some downtime in between festival going.

As cliché as it sounds, Zadar’s appeal comes from taking your watch off and sinking into the city’s leisurely ambiance.

Given that Croatia was once a Roman municipality, the town is unsurprisingly Italian in its look and feel, and features plenty of sleepy alleyways that lead to notable historic buildings including the St Anastasia Cathedral and 16th century Church of St Simeon.

Kastel, a 13th century Venetian establishment in the old town, is worth a mention for a delicious pitstop: hearty local lamb, seafood stews and crisp, locally made Korkula wine are the order of the day here. 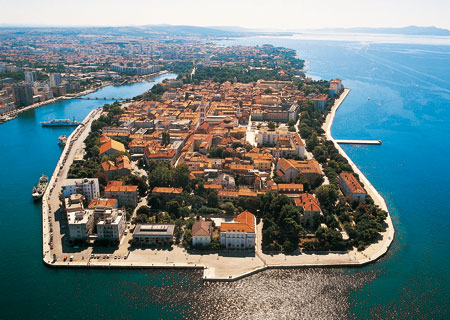 Zadar from the air.

Less than an hour from Zadar you’ll find mountain tourism at its most majestic. Serving up an orienteering dream in the form of fissures, crooks, cliffs, pits and caves, the Paklenica National Park is made from two limestone gorges that offer plenty of easily accessed trails.

Ideal for novice hikers, the park serves up some beautiful topography, not to mention rare butterflies, spectacular caves and grumpy-looking Griffin vultures. Best of all, it’s a short 50-minute train ride from Zadar.

Nestling behind the walls of the old city is the Arsenal (no, not the Gooners football club) but an ancient Venetian maritime building that has been restored from former crumbling glory to now showcase some intriguing art shows, craft exhibitions, live music nights and theatrical performances. Get more info at arsenalzadar.com/eng 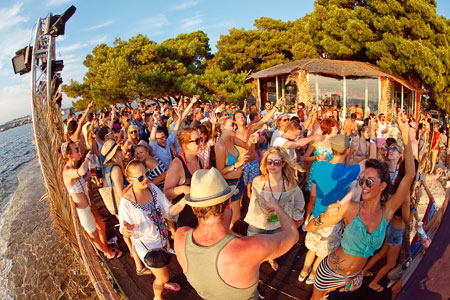 A 20-minute cab ride from Zadar is Petrcane, a pretty fishing village that’s enjoying an annual influx of good-timers coming for several alfresco music festivals based along the region’s breathtaking Dalmatian coastline.

The Garden Festival (July 6-13) paved the way in 2006 and continues to offer a feel-good fusion of disco, house and funk (thegardenfestival.eu).

Four more festivals – Electric Elephant (July 14-18; electricelephant.co.uk), Soundwave (July 22-24; soundwavecroatia.com), Suncebeat (July 29-31; suncebeat.com) and Stop Making Sense (August 12-14; sms-2010.com) – have joined in the act to ensure that a visit to Petrcane between early July and September will be upbeat in more ways than one.

Where to sleep: For budget watchers, the clean simplicity of YH Zadar is enhanced by its tranquil location overlooking Zadar’s marina. Beds are comfy and dorm rooms have private and shared bathrooms from £12. Book online at hihostels.com. For those wanting to self-cater, the tasteful Villa Triana 5km away on Diklo is good choice with studios from £53. And if you’re blowing the budget, don’t miss Hotel Bastion (hotel-bastion.hr) in the town centre, for boutique, spa-enhanced indulgence.

Where to eat: Hit Zadar’s Five Wells Square for Skoblar, the oldest taverna in the city and a standout option for fresh seafood and grilled fish. For an authentic pizza / pasta for under £5, go to Dva Ribard on Blaza Jurjeva 1. Fancy something special? Don’t miss Tamaris, a short journey from the centre where the signature roasted lamb from nearby Pag Island is reliably delicious.

Where to drink: The Garden Baris is an atmospheric, stylish spot to watch the sun go down over a mojito or two. Back in Zadar Old Town, Gotham bar has quirky DJs and gorgeous garden for alfresco drinking. If you’re after something more relaxed, Maya pub is a chilled option featuring vaguely exotic Eastern tunes.

Getting there: Ryanair flies daily to Zadar from London Stansted. (From £80 return.)
Festivals: Tickets and information for the Garden Festival and other Petrcane based festivals can be found at: watchthegardengrow.eu/the-garden-petrcane.

Searching for gorillas in the Democratic Republic of Congo