My nostrils are streaming and I’m almost blinded by the glare of the sun reflecting off the dazzling Caribbean Sea that lies beyond.

My descent of Colombia’s own ‘Death Road’ (which, like its namesake in Bolivia, is so-called for its rough surfaces, precarious vertical cliff drops and hazardous hairpin turns) would make European health and safety personnel shudder, especially given the reckless abandon with which I’m flying down these mud-splattered tracks.

But then I’m not in Europe – far from it. I’m in the Unesco-protected park of the Sierra Nevada de Santa Marta – the world’s largest coastal mountain range, which sits some 5700m above sea level on the northeastern coastline of Colombia.

It’s an unblemished playground that’s still far from the standard ‘gringo trail’, and for those with a penchant for bike-based action, it’s a dream come true.

Inhabited by more than 30,000 tribal Indian communities, including the spiritual Kogi and Tairona people, this 383,000-hectare region (about the size of Rhode Island) is referred to by locals as the cradle of the Earth – a unique geographic recipe of perfect snow-capped peaks, dense cloud forest, alpine meadows, high tundra and, of course, the azure Caribbean Sea.

It’s also a place of historic torment: invading Spanish conquistadores penetrated the region in the 1500s and claimed the Tairona people’s immeasurable geographical treasures as their own, and also established a successful coffee agriculture that remains Colombia’s finest variety.

Now reclaimed by its rightful owners, the Unesco zone is zealously protected by the indigenous Tairona, who play an active role in determining who comes into the park, how it’s used and what kinds of sustainable experiences can be had.

Some of the highest peaks in the Sierra Nevada haven’t been scaled for more than 30 years, so if you fancy reconstructing your own Into The Void adventure, you’d have to ask the permission of a Tairona elder to get there (you’d also need balls of steel).

Biking here is no less complicated – many trails spill into sacred Indian ritual sites (and the odd ex-narco route), and need approval granted before entering, meaning most historic attempts to navigate the mountains by bike have been both dangerous and against the area’s moral code.

But there is one way to do Colombia’s high altitudes guilt-free. Elemento Outdoors, a small, conscientious adventure company, headed up by UK-born thrill-seeker Tom Wilkinson, is working with locals to open up the area – but only with their say-so.

“Even six years ago, this wasn’t something that would have been possible because of the threat of right-wing paramilitary or left-wing guerrillas,” Tom says. 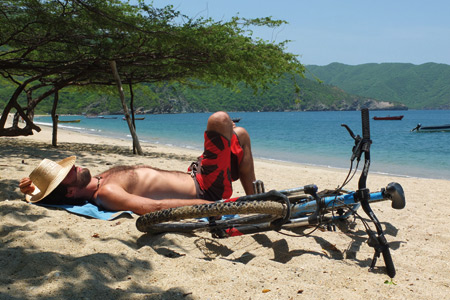 For five years, however, the area has enjoyed official safe status and locals in the laid-back basecamp town of Minca are visibly revelling in their peaceful new way of life.

“It’s been great for tourism and morale, as well as those who want to come and explore here,” Tom enthuses, clearly an avid fan of mountain life in Latin America.

“The first time I came to Minca and began exploring the Sierras, I was staggered by how rich and unspoilt the country’s geography is.

I’d argue that it’s one of the richest geographic and spiritual destinations in South America,” he says with a whisper, as if to highlight his desire for the nation’s best-kept secret to remain exactly that.

“And because the ‘elder brothers’ (the Tairona people) have such an influence on the volume of visitors coming into the mountains, your experience will almost certainly be even richer.”

I for one am happy to be free from hordes of fellow gringos – something that’s increasingly rare on the aptly nicknamed Gringo Trail in South America.

To this point, Tom’s tours stretch to no more than six people at a time, and garner a good deal of praise for their considered blend of natural wildlife (the region is home to more endemic species of bird than anywhere else in the world), high altitude waterfall swims, finca visits and plenty of challenging paths that appeal to even the most seasoned pro.

For me, the tour that really stands out involves sleeping in an ex-Pinos ridge some 1450m up in the cloud forest.

We head up from Minca late afternoon in a 4WD and finish the last leg of the journey with a thigh-tingling 30-minute hike to the ridge, catching a glimpse of the last lingering streaks of sunset on our arrival. 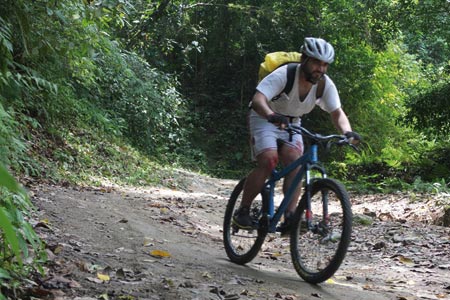 The winking lights of Santa Marta hold my gaze some 45km back down the mountain. We’re all feeling a little weary, but are swiftly revived by the first of many rum shots as a surprisingly chill Alpine breeze creeps around the mountain edge.

I shiver for the first time since entering Colombia, a sensation both pleasing and strange after the humidity of Minca’s heavy jungle climate.

As part of the unique Los Pinos experience, we sit down to a delicious alfresco dinner of spicy chicken stew, rice and fresh guacamole – made from the creamy produce of trees growing only metres from our table.

The host of this base-turned-hostel, a charismatic Colombian called Alejandro, joins us and lubricates both the meal and conversation with copious pours of honey rum and tales of his life on the mountain.

His hosting skills are both effortless and enchanting, and, inspired by the Colombian ability to truly live in the moment, all my anxiety about the downward descent disappears.

We drift over to large, lumpy sofas that have been placed near a roaring fire. The warmth is a welcome counter to the fresh frost that has settled across the milky, moonlit landscape of valleys and bluffs.

My eye is drawn away from the scene by a storm that flickers out at sea, its pale blue current brightening the sky in sharp shocks and prompting our host to propose a drinking game for each burst of electricity.

It’s hands down the best shot I’ve ever had, and in arguably the most memorable of surroundings. But our tales around the campfire are short-lived; all eyes in our party droop as the warmth of the fire and rum takes hold.

Next morning, I’m up at 5.30am and my reward is an exclusive view of the valley as a snaking morning mist curls around the mountain and early sunbeams hint of a glorious day ahead.

We breakfast on cinnamon porridge, local bananas and some of Alejandro’s addictive Minca-grown coffee. I’m wired and ready to saddle up.

Tom’s good nature and intuition for our group’s varying tolerance for thrills makes him the perfect guide, but you get the sense he’s game for going as far as possible without jeopardising our safety.

The occasionally tricky roads are made significantly easier by our £2000 state-of-the-art bicycles, shipped over from Europe with Armadillo treads and super-light aluminium frames.

We go through the basic safety procedures and a few warnings about canyons, then clip on our helmets and hit the trail.

For 30 free-wheeling, fanciful minutes, we glide like greased lightning down, down, and lower still through jungle-fringed cloud forests where monkeys howl and hummingbirds skit through deliciously fragrant flora. 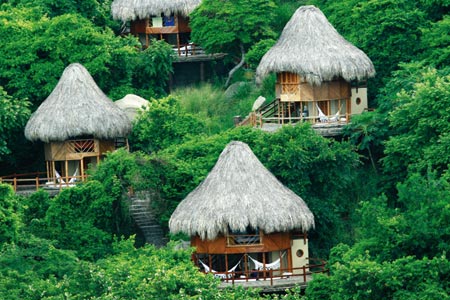 After an hour, we pass through a well-eroded river gorge and traverse muddy terrain that sends me sliding towards the edge of the canyon.

Thankfully, I avoid my own ET-style leap into the abyss and slam on the brakes instead. It’s the closest I come to flying over the ridge, and I sheepishly receive a reminder from Tom to not let my need for speed get the better of me.

Minutes later we’re winding through bamboo thickets and arrive at one of the Sierra’s oldest working coffee fincas, dating back to the early 1900s.

We disembark, stiff legs grateful for the stretch, and I salivate at the thought of a freshly roasted coffee.

After a small tour, we’re greeted timidly by a handful of workers who continue the physically taxing job of collecting, drying and roasting the beans according to traditional techniques.

We learn through an interpreter that the Colombians keep the lower quality, watered-down filter coffee to sell locally and ensure the tourists enjoy the A-grade beans.

It explains why previous roadside-bought Colombian coffees haven’t hit the spot (and are usually loaded with sugar to compensate).

Reuniting ourselves with the path, we bomb it the rest of the way through the valley, with fallen, mashed avocados littering the track like a giant guacamole trail as ears pop and signal our descent back into the outskirts of Minca town.

It’s only taken us two hours and 40 minutes to carve up the Sierra Nevada range on two wheels, but I feel like my appetite for the entire region is not even close to sated.

I hit boutique hillside hostel Casa Loma to lose myself in yet another startling sunset.

It gilds the entire mountainside in a magical, rose blush, and I swear I can see the lookout of Los Pinos from my lazy horizontal vantage point in an alfresco hammock.

Just when I think things couldn’t get any better, Elemento’s Tom pushes a large maracuja fruit laced with rum into my hands and declares, “I think you might have earned this today, chica.” 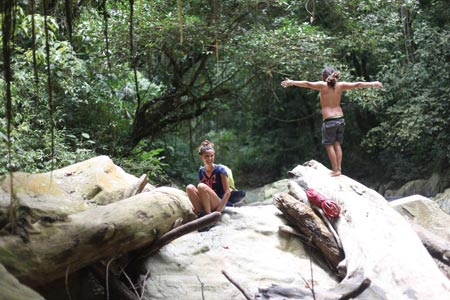 Best of the rest: Sierra Nevada on foot

Start your day spotting tropical birds and butterflies galore at this pretty waterfall. You can spend time ambling under the 30-metre bamboo arches or ‘guadua’ as they’re known, and when you’re feeling sticky, cool off in the waterfall, which is probably the cleanest, most refreshing shower possible.

This beautiful, gentle hike takes about an hour from Minca (ask for directions from your hostel).

Take a picnic and combine it with a dip in these two gorgeous swimming holes.

There’s even a rope swing installed here, so make like Tarzan and plunge into the cool water if you dare. Be warned, though: the water is unexpectedly chilly here.

Still got some strength left? The day trek to Los Pinos and back is a tough uphill journey, but it is definitely worth it.

The path takes you through cloud forest at the top and you’ll be rewarded with spectacular mountain views once you reach the pinnacle.

The weather changes constantly here, but on a clear day you can see the snow peaks from Los Pinos.

The total walking time is between five and eight hours, but you can cheat by hailing a motorbike as far as El Campano (it’ll cost you about £2.50) and taking the dirt road to the right, cutting your trek down to three hours.