A thief who stole a laptop lived to rue the day when the laptop’s rightful owner, Mark Bao, accessed the storage cloud to which the laptop was backing up and discovered a hilarious video of the thief practicing some highly embarrassing dance moves.

Not only was Bao able to track down and identify the thief through Facebook, he also took revenge by posting the video of the guy dancing on Youtube.

The hilarious clip shows the laptop thief filming himself grooving to Make It Rain by Fat Joe and Lil Wayne.

It’s not a pretty sight and the thief was understandably mortified. Enough so that he wrote a pleading letter to Bao, saying that:

“I am sorry for all that I have done. I would ask for forgiveness in person but I am not allowed back on campus for what I did.

“I went to your school at 2am so I can try and fix things up. I left the laptop with campus police.”

The thief goes on to say: “I am in no position for asking you for favours but can you please put down the videos you have put up of me.

I know what I did was wrong and if I was a different person fine leave it up but I have two Professional Jobs that if something like that gets leak I can get in more trouble… So I will Ask for that huge favor.

“If you want we can meet up so I can say sorry in person. It would not change much but at least I can say it in person.” 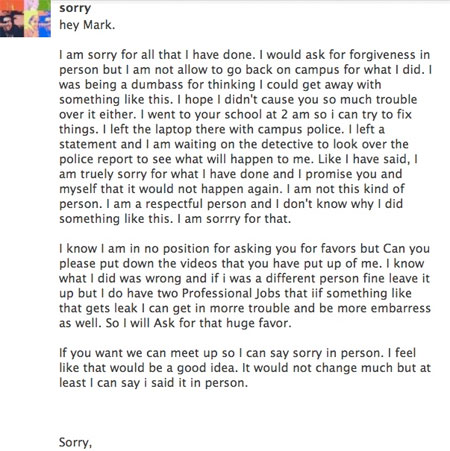 Bao showed no mercy, however, and the video of the dancing laptop thief if still on Youtube in all its glory.

Grab a cocktail at Soho Grind