Darwin for your delectation

I was hosting my own wet T-shirt competition. I was hot, but by no means sexy – sweating all over. My collar was stretched, stained and more toxic than Kakadu’s Jabiluka Uranium Mine.

Oh, and my shorts. I had been wearing them for five days straight, hiking through Kakadu. I was still carrying half the park under my nails. Put it this way, I was looking pretty ‘hobosexual’.

Relief came as I entered my hostel room, my face caressed by a cool breeze. I was getting double-teamed by the air-conditioner and the fan. Dropping my bag on the floor I collapsed on the bed, exhausted, granted with a damsel-like gasp for melodrama, but damn it was hot. In the oppressive heat of Darwin, my plan for the following day was to visit all the cool places, quite literally.

The next morning, stepping through the sliding doors, a wall of heat hit me like a freight train, instantly knocking the life from me – not a good start.

My first stop on the air-conditioner tour was the free Art Gallery and Museum of Northern Territory – a perfect introduction to the Northern Territory and Darwin’s past. I learnt about Christmas Eve in 1974 when Cyclone Tracy ripped through the Top End. I got a feel for the Norther Territory’s natural food chain, from snakes, marsupials, sharks, crocs and birds of prey. Left to our own devices, humans are somewhere in the middle.

The most feared of all is the saltwater crocodile. Stare into the eyes of the most infamous of the salties, Sweetheart. He terrorised local fishermen in a river nearby Darwin for years before a relocation went wrong. You’ll also learn about the important role Australia and specifically Darwin played in WWII.There were more bombs dropped on this outpost than Pearl Harbour.

In the art gallery section you’ll find mesmerisingly meticulous works of art by indigenous artists like Rover Thomas, prints from Andy Warhol and other travelling exhibitions.

Escape the sun and learn more about Darwin’s role in the war at the WWII Storage Tunnel Tours. Running from the wharf, under the city, tunnels were constructed to protect Darwin’s oil supplies. The war finished before they were put into action and now are used as a tourist attraction. Photographs from this period feature wartime activity in the Top End – quite the history lesson. 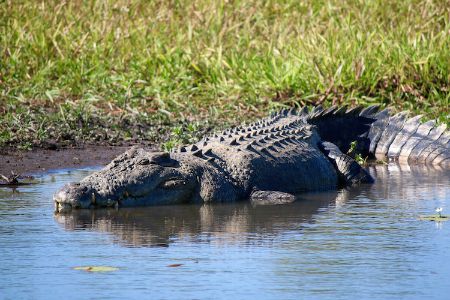 Lucky bet
I thought to myself, where else is air-conditioned? The casino, of course. Money is always tight when you’re a backpacker so why not try to win some cold hard cash and drop a cool hundred at the blackjack table at Skycity Casino?

Actually I just dropped a tenner but played it like Dustin Hoffman in Rainman. That was before I got over- zealous, doubled down and lost it all like Vince Vaughn
in Swingers. While it isn’t the most culturally enriching tourist attraction, a trip there could have you winning big for a tour to the Kimberley. If you don’t gamble, it looks over the harbour so it’s a good place to down a few cheap cocktails and watch the tide run out.

A refreshing dip
Don’t be fooled, you can still beat the heat in Darwinand spend your sunny days outside. Unfortunately, due to box jelly fish, crocs and fish hooks, it can be dangerous swimming in the ocean, so Darwinians got together and created the awesome redeveloped Wharf Precinct. There you can jump in the pool, with wave machine, take a jet boat ride and then gobble down some cheap fish and chips.

If you do need to get on the open waters with the wind in your hair, there are a number of sailing cruises you can take in Port Darwin and the Arafura Sea. There are options for every budget.

Spend a couple of hours in the botanic gardens wandering around the rainforest and monsoon forest gardens. With over 192 types of palms and an array of tropical plants, you’ll find shade under a leaf big enough to cover you and your roomies.

Market mayhem
At sunset on a Thursday or a Sunday there is only one place to be – the Mindil Beach Sunset Markets. Here you’ll find a huge range of stalls selling everything from excellent Asian dishes to Aboriginal art, local crafts and about a thousand different covers for your phone or iPad.

There are also some pretty talented street performers, from circus folk to didgeridoo and percussion shows that redefine the term drum ‘n’ bass. Mindil Beach can attract around 5,000 pedestrians meandering between palms on a nice night, which it always seems to be up there. I took in the million colours of dusk, ate chilli prawns on a stick, and figured I’d take an eye out if I tried the whip cracking show, so I watched the balancing monk guy instead.

Date night movie
As the Dry Season rolls around, the skies are reliably clear. Darwin is the perfect place for an outdoor cinema. The Deckchair Cinema shows all sorts, especially arthouse films that you missed two months ago at the normal cinema because they only lasted a week. It’s a great setting for a date. Stretch out under the stars with your favourite friend and try your luck with the infamous popcorn/cockporn trick – you know the one.

Nighttime shenanigans
If that worked, and things are heating up, head to the pub. Just because the sun went down doesn’t mean the thermostat did. An evening in Darwin means things are just heating up, so to speak. All the pubs are air- conditioned or boast large open air decks. Some clubs are so serious about keeping their patrons cool they’ll spray hot girls’ chest areas with water pistols to cool them down. Of course, this has the opposite effect on the men

Pubs like Shenannigans, Deck Bar, and Tap Bar are all good places to start. But try as I might it was impossible to avoid a place that wasn’t playing “Summer of 69” and some Proclaimers crap, so I opted for the nearest watering hole. After a few schooners you’ll no doubt end up at Monsoons: it’s a wall-to-wall backpacker-fest. Expect more cheesy music, games and competitions, dancing galore and cheap drinks.

At the end of the day I stumbled back to the hostel feeling I had accomplished my mission. I had seen the sights of Darwin, I had consumed a lot of liquids and felt really cool. In short, I had thoroughly beaten the heat.

With nothing left to do, tomorrow I would sit by the hostel pool and quietly perspire. 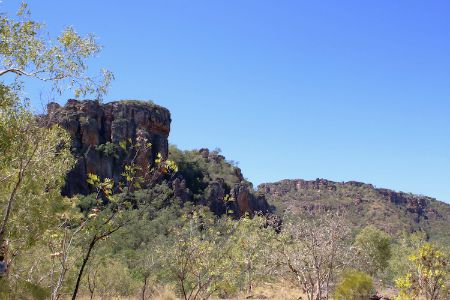 CAGE OF DEATH
Houdini swims past, just inches from my face, and looks me straight in the eye.

The piercing, almost dismissive, glance is clear. His teeth practically sparkle. I can almost hear him thinking: “I want to eat you.” In case you’re confused, I’m not suffering a cannibalistic vision of the famous (and dead) escapologist. Not quite at least.

I’m treading water in the Cage of Death, one of Darwin’s most nerve-jangling adrenalin thrills. The Houdini I’m sharing the water with happens to be a giant saltwater crocodile, who would love nothing more than for me to try and escape the floating plastic box that currently separates us.

Getting in the water with the world’s biggest reptiles had seemed a good idea… until the cage door swung open and it was time for me to get in, that is.

It was hard not to suddenly feel very, very vulnerable as, dressed only in our swimmers, we looked down the ladder.

Being the gentleman of course, I let my girlfriend descend first. And so, we got lowered into the water, like lumps of bait towards a master magician man-eater, and started feeling a little nervous.

Gradually we’re submerged into the world of the salty until we’re waist deep in water, Houdini’s water. There’s no sudden rush, no snap of teeth or crash of hungry power – judging by the scratches, these crocs have clearly tried that before and learnt the lesson.

But suddenly, Houdini is on the move. He effortlessly cruises towards us. For such a massive animal, it’s incredible how gracefully he moves. He hovers, his huge head just inches from mine with only the plastic and a bit of water between us. There’s no doubt that without the plastic he’d be ripping me to shreds in a second. And would absolutely love it.

But after staring us out for a while, he carries on past and is gone, leaving us buzzing from the encounter.

The damage & the details: The Cage of Death at Darwin’s Crocosaurus Cove (crocosauruscove.com), costs from $165 per person.

Running of the Bulls – While You’re There