Theatre Review: The Man Who Had All The Luck

Like his more frequently performed “Death of A Salesman” and “All My Sons” (which it predates by several years) it involves two very different brothers and a father living an illusion. In this case the central character is David Beeves, a self-taught Midwestern motor mechanic who is desperate to marry his childhood sweetheart (Chloe Walshe’s sympathetic Hester) but fearful of her violent father. After seven years of procrastination, he finally summons the courage to confront the man, only for him to be killed in a freak accident, leaving the way clear for the two young people. 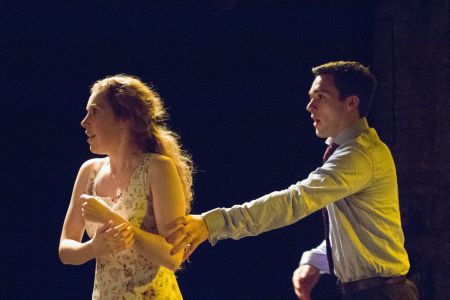 And every time David faces what seems to be an insurmountable problem, fate steps in and not only rescues him but makes things far better than he could ever have hoped for. Yet as time goes on, he begins to question what he views as his undeserved luck – surely one day things will go terribly wrong and he’ll have to pay for his previous good fortune?

Director Paul Lichtenstern plays down the almost supernatural nature of the events shaping David’s life in a production which is well served by Jamie Chandler (as decent, hard-working David) and, among others, Keith Hill’s single-minded Beeves senior (relentlessly coaching younger son Amos in preparation for the day when a baseball scout will finally recognise his talent) and Alex Warner’s kindly immigrant Gus whose 4a.m. visit is pivotal in changing the young man’s future.