Switzerland sometimes gets a bit of a bad rap – it’s historically neutral, squeaky clean, always on time and, dare we say it… a bit boring. But if you can look past the perfectly synced watches and clock towers, you will learn that Swiss cities are much more pulsing than old guidebooks would have you believe. Throw the Alps into the mix and you’ve got a holiday on your hands that will keep everyone happy. To dispel some of the rumours and get the exploratory juices flowing, we’ve put together the top five places to visit in Switzerland. And we’ll start with this bonus: your flights will never be late. 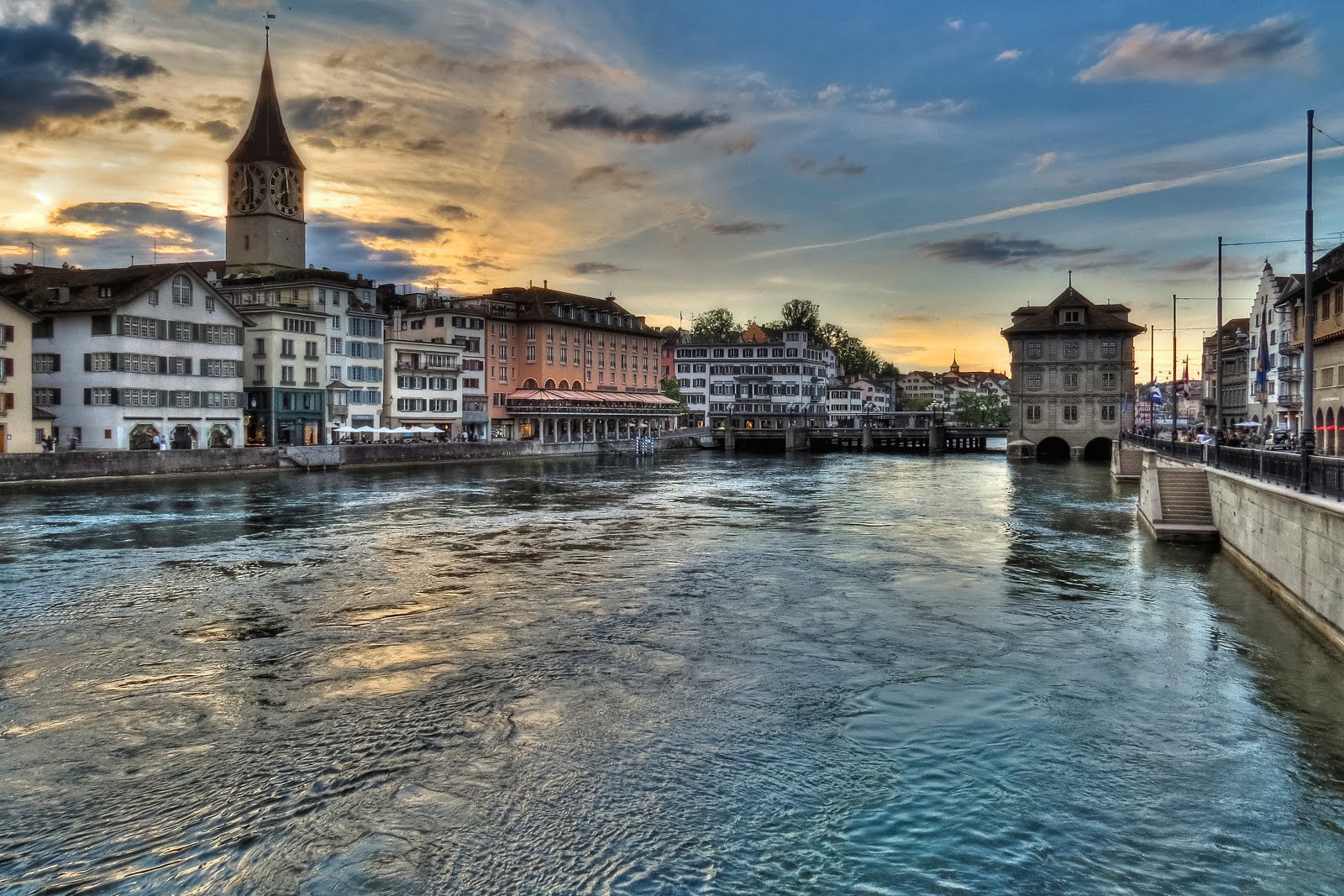 Switzerland has made Zurich its top city destination to visit – set beside a lake with dramatic views of snowcapped mountains in the distance and more than 50 museums and 100 art galleries, it pretty much sums up the essence of the country.

Things to do: Seeing Zurich by boat will allow you to take in the busy life on and alongside the water, whilst also breathing in that fresh wilderness air as you go. Swiss chocolate is indisputably the best in the world, so stop by the Lindt Factory Outlet just south of city and pig out until your heart’s content. There’s also a huge array of museums – there’s the classic stops, such as the museum of fine art, Kunsthaus where you can see paintings by Munch, Van Gogh and Picasso, to more off-beat attractions such as the Zurich Hospital museum which exhibits 3D wax replicas of skin diseases and body parts.

Going out: Going against all you know, Zurich (not Berlin, not Hamburg, not Frankfurt) has the highest ratio of clubs to population in Europe – and one of the most active clubbing scenes. On weekends about half of the country floods to West Zurich which is a converted industrial area packed full of trendy bars and warehouse spaces such as Rohstofflager and Q Club. This is techno and deep house central so get ready to be up all night. There’s also plenty of bar hopping with the best venues along an alley-way in the red-light district or ‘party mile’ of Langtrasse.

Where to stay: Langstars (langstars.ch) is a hostel in the ‘party mile’ of Zurich. Rooms cost £29 a night and breakfast is included. Hostel Biber (+41 44 251 90 15), located in the nearby heart of the buzzing old town is also one of the few cheaper options in Zurich. Rooms cost £25 and there’s a spacious roof terrace.

Set around a tranquil lake (they like their lakes in Switzerland), Geneva is one of Europe’s cultural (and political) centres and is buzzing with world-class entertainment and attractions. The watch-making capital of the world, the workshops of Rolex, Piaget and Cartier call Geneva home. It’s jammed full of parks and waterways with a popular attraction being the Jet D’eau, which is the world’s tallest water fountain and makes for a dazzling spectacle that means you’ll never get lost.

Things to do: Must-sees include the Old Town, which is home to St Peter’s Cathedra offering incredible views of the city. There’s also the Bohemian neighborhood of Carouge which is full of arty cafes and interesting galleries. The famous ‘flower clock’ is planted in a park in Geneva and nearby you can drool over some of the most expensive watches in the world in shop windows. If however, you’re in need of a bargain, head to Geneva’s oldest flea market, Plainpalais, for some hidden gems.

Going out: Rock ‘n’ Roll chic Le Baroque night club is an experience with a Swarovski-set diamond throne, an area for cigar smokers, crystal chandeliers and velvet draped windows.  For smaller bars, head to the Carouge neighbourhood where you’ll find cheese, indie music, techno, and everything in between.

Where to stay: Even the budget options are pricey in Geneva, but a good start is Ibis (ibis.com), which is five minutes from the city-centre and costs £54. Hotel Restaurant Kutchi is 50 meters from Lake Geneva and rooms have water views. Rooms cost £79 a night. 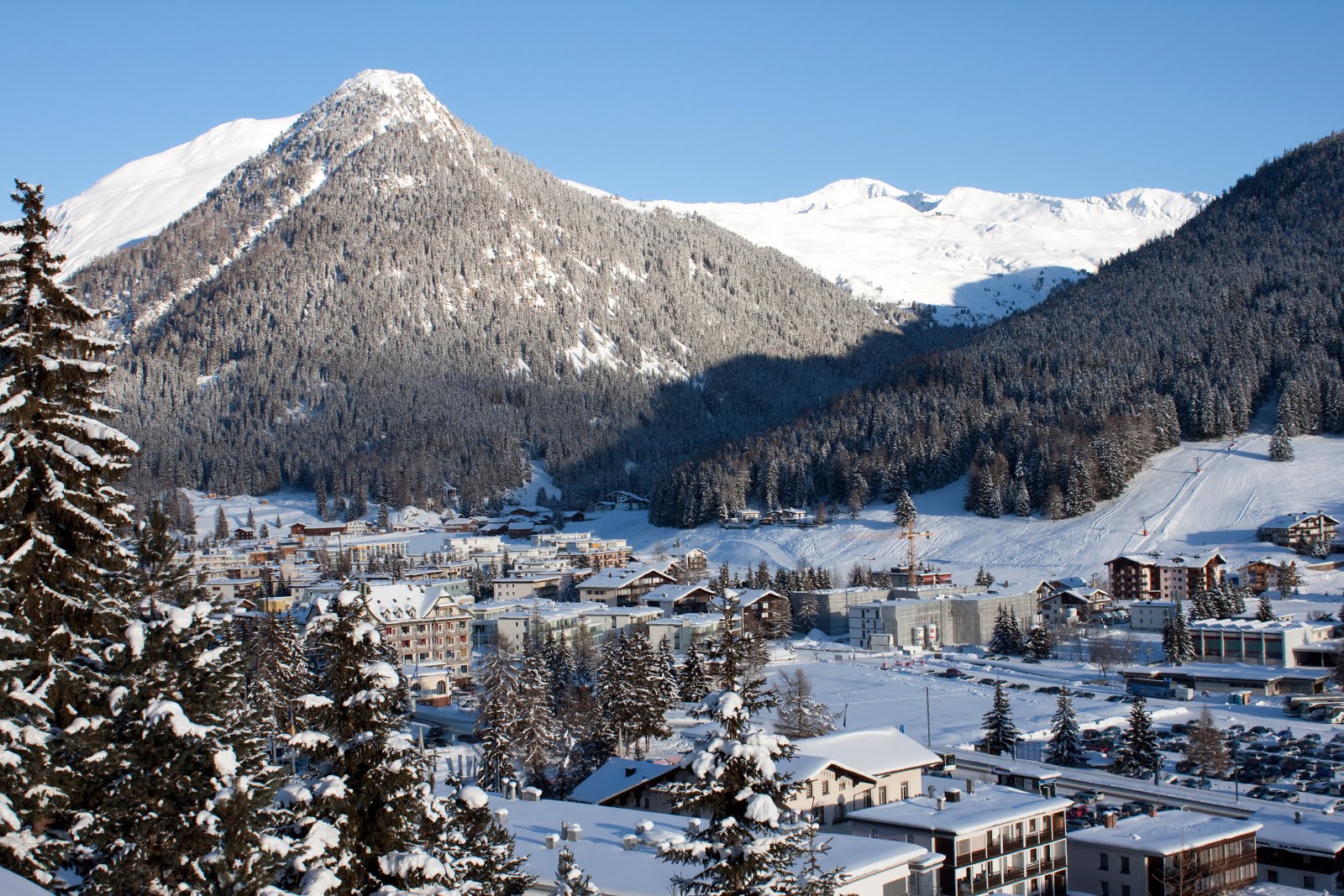 Davos is one of Switzerland’s best-known ski areas – it’s got big slopes and even bigger parties. It’s also one of the top places in the Alps for snowboarding. Don’t fear if you’re a newcomer though, there are plenty of beginner’s classes on offer and there are trails for all levels.

Things to do: Skiing is obviously the name of the game here. Klosters (www.davos.ch/en.html) is probably the most famous resort area with in-town slopes for beginners and night skiing for the hardy. For the rest, the après-ski venues are buzzing each evening. From Klosters you can also go horseback riding, trekking, mountain climbing, and paragliding.

Going out:  Davos is the party town of the Alps and some of the club nights begin in broad daylight. You can ski straight into Gaudy’s Gastro and have a coffee and a shot to get the night started, then move on to the legendary Ex-Bar which stays open until 5am.

Where to stay: Youthpalace Davos is a budget-conscious party hostel with bright, modern dorms and a roof terraces. Rooms are a steal at £15 a night. If you’re going with a group, booking an apartment can keep prices down. Check davos.ch/en/stay/accommodation.html for a full list of places to stay in Klosters.

Hiking and adventure trips rule the roost in Lucerne. This German-speaking city is nestled between jaw-dropping mountains and of course, in true Swiss style, a lake. The city is a good base for excursions with great cafes and restaurants and idyllic scenery. 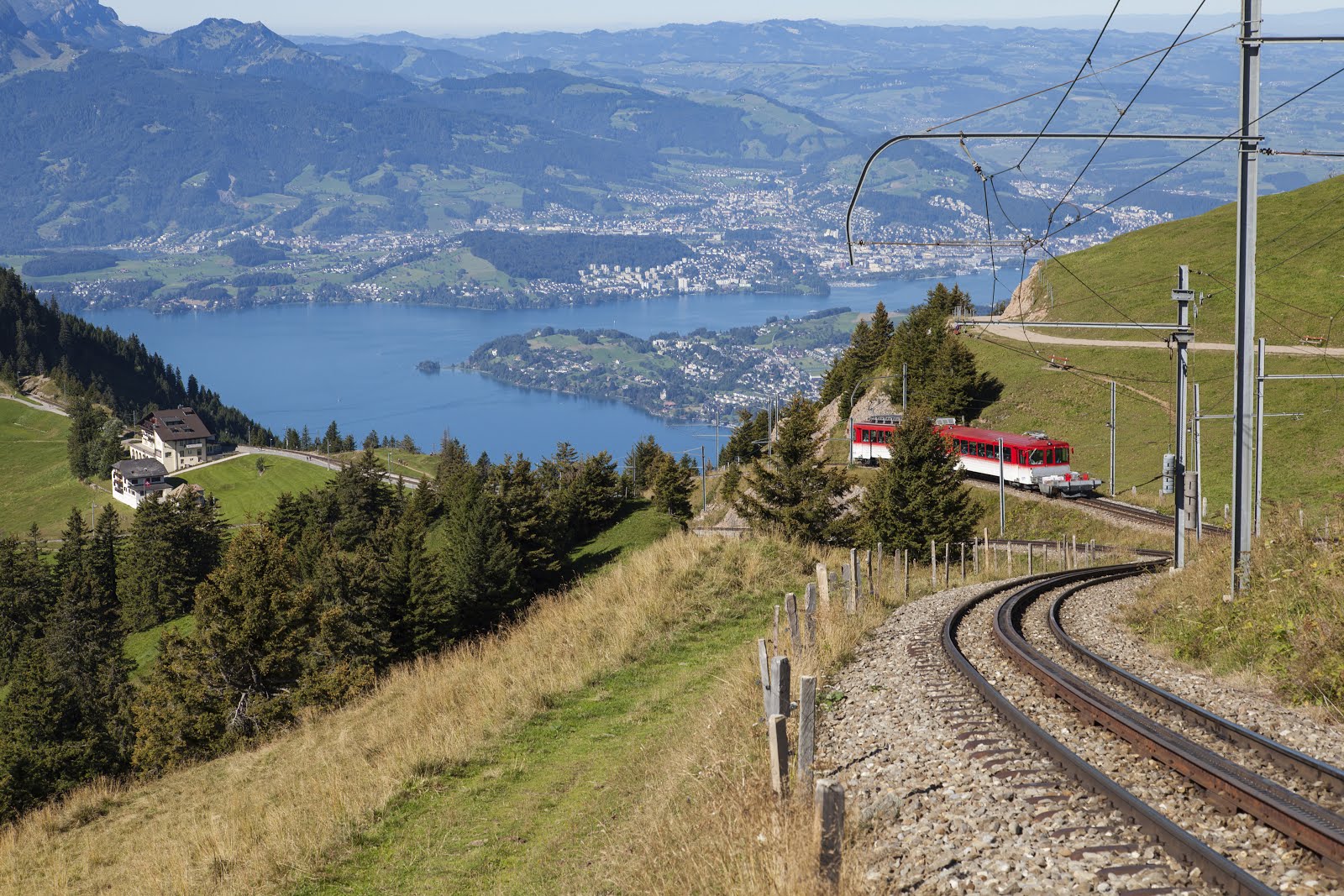 Things to do: Take mountain bikes up the rocky facades of Mount Pilatus or book a day trek up to the cloud-covered peak of Mount Rigi. You can also visit the ice tunnels of the Rhone Glacier or peer into the dizzying depths of the Aare Gorge. Most hotels have information about day trips and treks. In the city itself is the famous monument of a dying lion carved into a rock face, as well as a 14th-century wooden bridge that is steeped in history and worth a stroll around.

Going out:  Enjoy dinner in one of the many rooftop terrace restaurants, which are all over the city. The Scala Terrace has great food and even better views but is best saved for an occasion. Loft is a trendy bar that attracts young hipsters and has a cool design. For something more down to earth check out La Madeleine, which is a good spot for low-key gigs and has a cosy bar.

Where to stay: The Lion Lodge (lionlodge.ch) is in the centre of the city and comes in at £22.60 a night. Seminarhaus Bruchmatt (seminarhaus-bruchmatt.ch) is located in a lush park five minutes away from the centre and costs £45 a night. 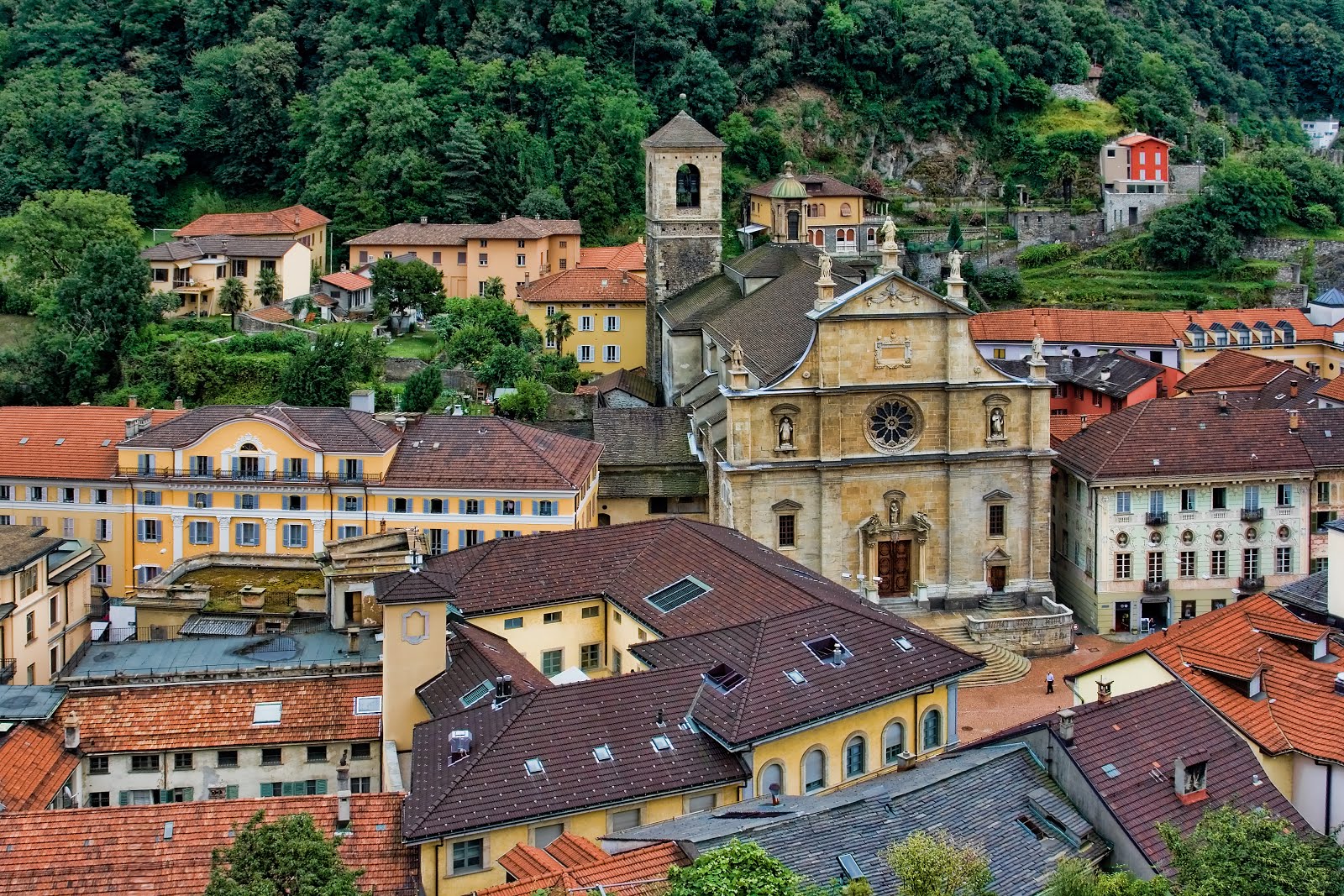 This city is the capital of the Mediterranean region of Switzerland and has a very Italian feel (especially given that it’s their official language). As well as decent sun year-round, the streets are lined with palm and citrus trees, and there’s great pizza and wine to be found on every corner.

Things to do: Bellinzona is famous for its three castles that make it a world heritage site. Ancient walls, which are illuminated at night, make the city look magical set against the Swiss Alps. In the old town there are meandering alleys and hidden-away antiques markets.

Going out: Bellinzona is not very big and it isn’t a major destination for going out. There are some good wine bars in the centre such as Terra Mare and Wine Bar. One of the best restaurants in town is inside the Castlegrande, one of the castles. Giardino is a well-kept secret full of locals who flock there for its reasonably priced (and completely delicious) Italian food.

Where to stay: Albergo San Giovanni is in the heart of the beautiful old town and is just a 10-minute walk from Castlegrande. Rooms cost £40 a night. Casa Jolanda (casajoland.com) has a pool, so you can take advantage of the Mediterranean weather, and it offers apartments with fully equipped kitchens. Flats start at £76 a night.

Heather Mills: I thought I had cancer

London sound: Music gigs and club shows to see this week, including Eels and The Strypes