We were just about to enter the perplexing lower grotto, one of Lebanon’s top tourist attractions. Located about 18 kilometers from Beirut, the capital, the grottoes are a fantastic day out for tourists to the Middle Eastern country.

Gingerly following the guide in a line; trying not to step on anything that looked too much like a valuable jewel, we entered Jeita Grotto. I was near the back of the line, but I heard an aural Mexican wave of ‘aaah’ and ‘wooow’ before me. Entering the cave, I let out an exclamation of my own.

The guide had already told us how Reverend William Thompson was the first person to enter the lower grotto after their time as a prehistoric residence. Despite not being able to see anything, he shot his gun so he could have a chance of hearing the size of the caves – and was overwhelmed at what he’d discovered. The resulting echo made gave him the realisation that he’d revealed a large space; something quite special. Although nowadays, it’s possible to see a lot more in lower grotto, I could imagine how Reverend William Thompson felt when he first stumbled upon the caves.

Jeita Grotto is a the longest cave system in the Middle East; in the form of two Karstic Limestone Caves in the Nahr al-Kalb Valley. After their discovery, expeditions of the caves exposed up to 9 kilometres of the grotto. Explorers were blocked by an underground waterfall, which is nowadays known as ‘Hell’s Rapids’, due to the razor sharp rocks that it expels.

Subsequent expeditions were carried out by English, American and French explorers, and eventually the lower grotto opened to visitors in 1969. Coincidentally, this was the same year that the upper grotto was discovered. During the Lebanese Civil War in 1978, Jeita Grotto was closed and its tunnels used for ammunition storage. It reopened to tourists in 1995.

Visitors to Jeita Grotto today can explore the upper grotto on foot. It is accessible by concrete walkway, with nearly 750 meters able to be explored by tourists. While exploring the grotto, I felt like I’d been transported to another world, enjoying this underground secret that was cut off from the country around me. The upper grotto is absolutely stunning, with crystal studs as far as the eye can see and beautiful stalactites and stalagmites; visitors to the grotto have the chance to see the largest known stalactite in the world! 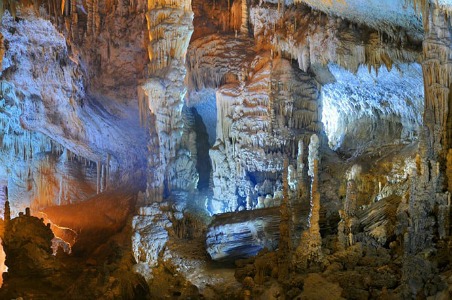 The lower grotto has a subterranean river that provides fresh drinking water for locals, so visitors must take a boat if they would like to explore. The black lake is picturesque, and silence falls upon visitors as they travel further into the cave. As I boarded my boat, I tried to imagine how the first explorers who stumbled upon Jeita Grotto would have felt. The fact that they waded through this river, as obviously they didn’t have a boat, and explored in near enough darkness fascinated me. The lower grotto really felt like I was descending into the centre of the earth.

Of course, the grotto has to be lit up by an impressive lighting system to enable visitors to admire the beautiful interior as it is today. The space is enormous – it’s somewhere that truly does have to be seen to be believed.

– The grotto is open from 9am until 5 pm, daily apart from Monday

– The price includes a slide show, cable car, train and trip to the upper grotto and lower grotto

– Even in summer, it can get very cold in the underground grotto – so remember to take a jacket

Antoine is a Canadian traveller on a mission to visit as many places in the world as possible and find the most interesting, overlooked and authentic experiences in each location. He currently lives in the Cayman Islands but spends a great deal of time travelling around all 6 continents. Follow his adventures on www.travelinglife.com.

YOUR SPORTS WEEKEND IN A FLASH: All the results that matter in one click (Week ending July 6)

Theatre Review: Witness for the Prosecution