The ginger tabby cat was up for sale on New Zealand’s version of eBay, TradeMe.

The seller, an expat originally from the UK who specialises in unusual texidery, found the cat dead on a nearby highway road and made his creation in the style of a classic tiger-skin rug.

“I thought ‘that’s a pretty nice looking cat’, did a u-turn and picked it up.” taxidermist Andrew Lancaster told The New Zealand Herald.

It was described on the auction site ‘Large male in excellent condition. Beautiful ginger/marmalade colour with striking markings. Great little gift for the mancave!’ 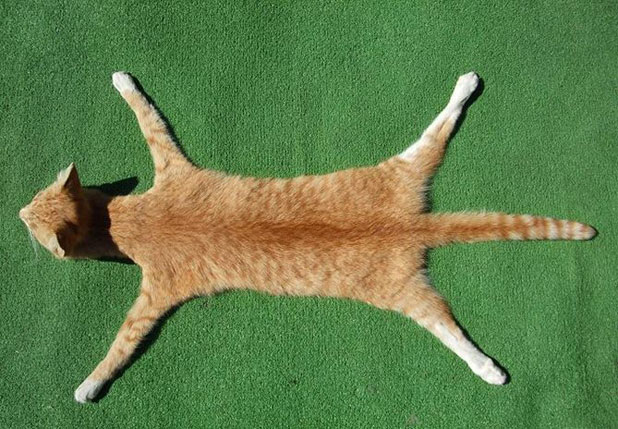 The creative animal-stuffer, who normally works with dead possums, said that he normally avoids ex-pets for fear of offending animal lovers.

“It puts a lot of people’s backs up. If someone has known their pet all their life, it’s very hard to get it right when you work on them.” 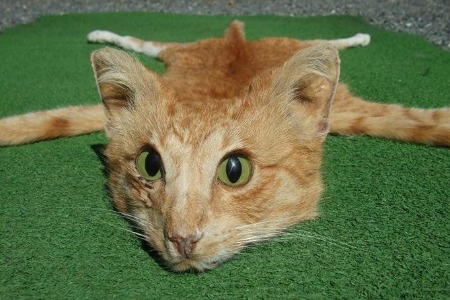 Eliot Pryor of animal welfare organisation SAFE said that there was “something distasteful about the attitude shown to an animal once it has died, as the description is light hearted and not respectful.”

However, previously a representative from SAFE was unconcerned about the taxidermist’s unusual style – “On the scale of what’s happening to animals in New Zealand this doesn’t rate – it’s the living animals that are suffering.” said the group’s director Hans Kriek in 2011.

The controversial cat-skin rug, which Lancaster described as ‘probably wild’, eventually sold on TradeMe for an impressive $955.00 – not bad for roadkill. 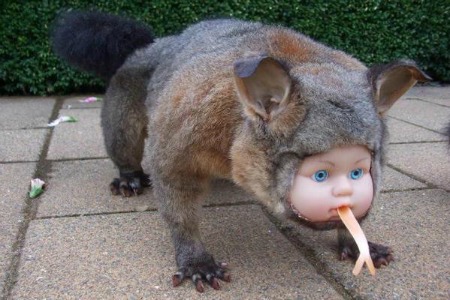 Lancaster previously hit the headlines with his weird taxidermy hybrids, which include a possum with a doll’s face attached (pictured above) and a possum’s head attached to a chicken’s body.