The sun’s out across Europe – so surf’s up! It might not be Malibu or Hawaii, but there are some great breaks across the continent just begging for a road trip, or a couple of hours on an orange/ blue-and-yellow plane.

WHY: The southwestern coast of the Algarve is arguably Europe’s foremost surfing mecca, thanks to the long Atlantic rollers that sweep its shores. Lagos and Sagres are the epicentres of the surf scene, with the former offering a frenetic party atmosphere, while the latter languishes in a chilled-out hippy haze. Winter swells are considered the best in this region, as strong winds over summer make better conditions for kite surfing. But it’s still a pretty good bet for a summer surfing trip, and with more than 150km of coastline to choose from, there’s every chance you’ll find a swell secret spot all of your own.

FACT: Local surfers often take to the River Tejo in Lisbon to ride waves caused by catamarans. The flat waters can enjoy 2ft swells in the right conditions.

WHY: This legendary surf spot on the Bay of Biscay in northern Spain neighbours Bilbao and San Sebastian, making it a great choice for those who fancy a side of holiday with their surf. Once a site on the World Championship Tour of Surfing, its deep barrels have hosted the likes of Kelly Slater and Andy Irons. Thanks to its renown, it can get dangerous out on the waves if the winds are strong and the crowds are out in full force. However, the sleepy fishing village itself is surprisingly unspoilt.

FACT: The Bay of Biscay can be treacherous as huge Atlantic swells batter the rocky coastline, so watch out for the rip.

WHY: The surf here at the southern tip of France doesn’t pack too much of a punch, which means it’s an ideal destination for beginners and intermediates. The Cote de Basque beach is great for newbies, with small swells and enough fellow foamie-riders to banish any self-consciousness. Grand Plage around the corner is suited to the more experienced, but is temperamental – the area of Anglet further north is more consistent and enjoys some huge swells.

FACT: Biarritz is a pretty luxurious seaside town, with prices to match and a popular beachfront casino. Don’t come here if you’re on a shoestring budget. 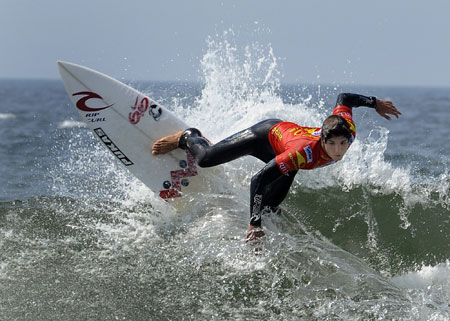 WHY: In northwest Ireland, Bundoran has formerly hosted both the European Surfing Championships and the Quiksilver World Masters, as the jade waves of the Atlantic crash on to the Emerald Isle’s headlands and flat rock reefs. Perhaps best known is Tullan Strand, which can produce fast hollow waves, as well as mellow peaks. For the lowdown on where to surf, plus lessons and lodges, check out Bundoran Surf Company (bundoransurfco.com).

FACT: The Peak in Bundoran is considered the cream of breaks in Ireland, in terms of both consistency and quality. This is for experienced surfers only.

WHY: The Canary Islands are a great place to catch a wave, thanks to warm waters and year-round sun. The islands lay off the coast of Africa and – even more confusingly – are often hailed as Europe’s answer to Hawaii. Fuerteventura in particular has a huge surf scene, with the largest Atlantic swells hitting the island’s north. Head to Et Cotillo beaches for paradise-pristine sands, mellow waves up front for beginners and big surf at the back for show-offs.

FACT: If you fancy changing things up, the strong winds at Flag Beach are top notch for kite surfing.

WHY: The Reykjavik surf scene comprises about 20 people, so there’s probably no better place to work the waves in peace. Icelandic surf school Arctic Surfers promises everything from gentle rolling point breaks for beginners to gnarly tubes. Plus, its ‘surf and snow’ trips mean you can snowboard from mountain to sea on the Trolls Peninsula, then hit the waves. Awe. Some. (arcticsurfers.is)

WHY: Norway is described by magicseaweed.com as “a rare surfing frontier”. If you’re serious about surfing and looking for an offbeat challenge, the cold Arctic swells here can be extreme. Jaeren is widely held to be the best surf spot, with long, sandy beaches and granite and boulder reefs. Pretty city Stavanger is an hour’s drive away and has a hedonistic waterfront on summer nights for a post-surf scene.

FACT: The best swells come in winter, when it’s mostly dark. But the long periods of light throughout summer make up for it, enabling round-the-clock action.

WHY: Hossegor has a rep as the best beach break in Europe for serious surfers, thanks to its consistent tubes. Its big shorebreak barrels pull in the Rip Curl Pro World Championships and Quiksilver Pro France, but be warned that Hossegor is prone to Atlantic flat spells, so you’ll need patience. Beginners can get involved from May to September, when the Atlantic is most active and produces decent waves.

FACT: A deep underwater chasm focuses the swell on Hossegor’s few miles of sand, which is why it’s so great
for green rooms.

What happens when you cross a goat and a sheep?